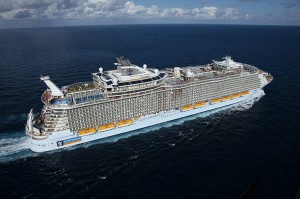 Royal Caribbean has announced that they will be sending the Allure of the Seas to Europe for the summer/fall of 2015. The Allure has been based out of Port Everglades (Ft. Lauderdale, FL) since the cruise ship joined the fleet a little over 3 years ago.

This will be the first time that the world’s largest cruise ship sails to a destination besides the Caribbean.  Royal Caribbean has not said whether they will leave the Allure in Europe or bring the ship back to the Caribbean in October of 2015.

Bookings for these European cruises will open to the general public on February 18, 2014.  Crown and Anchor members will be able to begin booking on February 12, 2014.

The Allure will join the Anthem of the Seas in Europe.  The Anthem will sail out of Southampton, England as Royal Caribbean looks to grow their market share in Europe.

The Oasis Class ships have been extremely popular since they went into service.  Royal Caribbean is still able to charge a premium on the Oasis and Allure, even though the ships have been out for 3-4 years.

Both ships are nearly 50% larger than any other cruise ship and double the average cruise ship size.  They introduced new features on the high seas including zip lining, an aqua theatre, and a park with live trees.