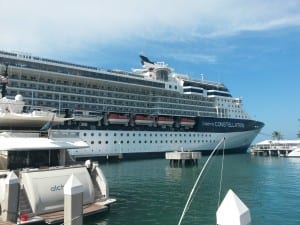 The Celebrity Constellation lost power on Sunday morning (February 9, 2014) after docking in Key West, Florida. Power went out at approximately 7:15 a.m. and came back on 90 minutes later at 8:45 a.m.  This comes less than 2 months after the same ship had engine problems which caused the ship to stay overnight in Key West.

Jonathan Mark,  a staff member at Cruise Fever, is currently on the Constellation with his wife. He contacted us about the power failure and said that everything on the ship is now operating as normal.  During the power outage, the toilets did not work, there was no running water, and the elevators were out.

The staff  onboard the Constellation was able to serve hot coffee to the passengers as well as a basic breakfast. Jonathan also told us that the staff was selling bottled water as the passengers ate breakfast.  Emergency lights came on in the hallways during the outage, as you can see in the video below.

The captain of the Constellation made an announcement after the power came back on. He said that they were having a few problems, but said that the power outage was not caused from a fire.

The Celebrity Constellation is currently on a 5 night cruise out of Ft. Lauderdale. The cruise ship left Port Everglades on Saturday and has stops in Key West, Florida and Cozumel, Mexico.

Cruise Fever reached out to Celebrity Cruises and was given the following statement: “Today, while Celebrity Constellation was alongside in Key West, Florida, the ship experienced a technical issue that caused it to lose partial power for 50 minutes. During this time, the back-up system came online in order to support all of the ship?s critical systems.  Engineers onboard are resolved the issue and restored full power to the ship.  We apologize for any inconvenience this outage may cause our guests.”

Cruise Fever will update this page as more information becomes available as well as pictures and video of the ship without power.