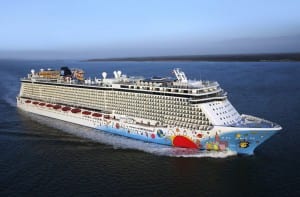 Tragedy struck on a cruise ship headed to Florida and the Bahamas on Monday morning.  Two small children, both boys ages 6 and 4,  had to be rescued from one of the adult pools on the Norwegian Breakaway.  Both children were unresponsive at the time they were found and were quickly given CPR by the ship’s medical staff.

The older child was airlifted by the U.S. Coast Guard to CarolinaEast Medical Center along with the child’s grandmother and a nurse from the ship and is recovering in stable condition at Vidant Medical Center.  The younger child was unable to be resuscitated and passed away on board.

The incident happened 35 nautical miles east of Morehead City, North Carolina.  The names of the children are being withheld at this time.

This past October, a 6 year old boy downed in one of the pools on the Carnival Victory.  Most cruise ships currently do not have lifeguards to watch over the pools on board.  Disney Cruise Line is the only line that staffs lifeguards at the pools on their ships.  However, it is likely that there will be a renewed call for staffed lifeguards on more cruise lines after these 2 tragedies.

Cruise Fever will continue to monitor this tragedy and will update this page as more information becomes available.  We would also like to extend our condolences to the family of the child that passed away.  Our thoughts and prayers are with the family.

Ben Souza
Ben is a world traveler who has visited 40+ countries and taken over 70 cruises. His writings have appeared and been cited in various media outlets such as Yahoo News, MSN, NPR, Drudge Report, CNN, Fox, and ABC News. Ben currently resides in Cincinnati, Ohio. Follow Ben on Instagram. Visit Ben Souza on Linkedin. You may email Ben at [email protected]
Cruise NewsCruise Ship Tragedy: Child Drowns on the Norwegian Breakaway
Previous article
Norovirus Outbreaks on Cruise Ships, What Gives?
Next article
Video of the P&O Oriana Cruise Ship Rocked by Rough Seas