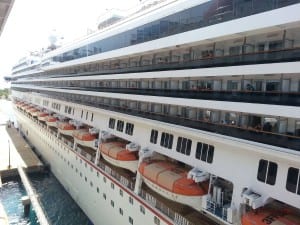 Over the past couple few weeks, norovirus outbreaks on Royal Caribbean’s Explorer of the Seas and on the Caribbean Princess have made front page headlines on leading media outlets such as CNN and Fox News.

It seems that any problem on a cruise ship becomes a breaking news story. When only 2% of the passengers became sick on the Majesty of the Seas, CNN called it the “latest setback for the cruise industry” and it was their leading story of the day.

While this news doesn’t affect people who have cruised in the past, it can change someone’s mind who is on the fence of booking their first cruise. The question is, should a future first time cruiser be worried about catching the norovirus when they go on a cruise?

Compare that with 1 out of every 16 (6%) Americans that will catch the norovirus in a year, you are 530 times more likely to get sick from going to work, school, the shopping mall, movie theater etc. than you are from going on a cruise.  However, the few times that an outbreak does happen on a cruise ship, the media makes it national headlines.  Outbreaks in schools, restaurants, and college dorms rooms rarely if ever make the news.

When a few passengers on a cruise ship carry the norovirus on board, it can spread extremely quickly due to the tight confines of the ship. While every ship has hand sanitizer available at multiple locations in the public areas, it does little to nothing to kill the virus. However, it isn’t completely useless at it does kill many germs.

The norovirus is extremely contagious and is caught by eating or drinking something that is contaminated. You can also catch the illness by touching a contaminated surface, and then touching your mouth, eyes, or nose. It can also spread by inhaling when the virus is aerolized.

Symptoms of the norovirus are vomiting and diarrhea and typically lasts between 24-72 hours. Cruise passengers who have the virus are confined to their staterooms. This is another benefit to booking a balcony so you will still be able go outside and get some fresh air.

The best way to keep yourself healthy on a cruise is to wash your hands with soap and water before and after you eat, and when you enter your cabin and before you leave your cabin. Also, void touching your mouth with your fingers.  If you are experiencing symptoms of the norovirus on the day of your cruise, do not lie on your medical form. Do you want to spread what you have to hundreds of other passengers and ruin their vacation?  Just another reason why travel insurance is always recommended.

If you are afraid to take a cruise because you don’t want to catch the norovirus, remember that you are 530 times more likely to catch it from going about your daily life than from taking a cruise.

Ben Souza
Ben is a world traveler who has visited 40+ countries and taken over 70 cruises. His writings have appeared and been cited in various media outlets such as Yahoo News, MSN, NPR, Drudge Report, CNN, Fox, and ABC News. Ben currently resides in Cincinnati, Ohio. Follow Ben on Instagram. Visit Ben Souza on Linkedin. You may email Ben at [email protected]
Cruise NewsNorovirus Outbreaks on Cruise Ships, What Gives?
Previous article
Cruise Ship Back In Port After Norovirus Outbreak; 173 Sick On The Caribbean Princess
Next article
Cruise Ship Tragedy: Child Drowns on the Norwegian Breakaway