Cruise Ship Back In Port After Norovirus Outbreak; 173 Sick On The Caribbean Princess 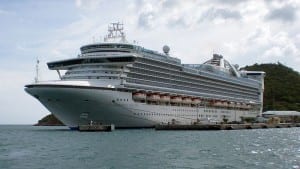 UPDATE:  The Caribbean Princess is back in Houston and all passengers have disembarked the ship.  The cruise ship returned early due to a dense fog warning and not because of the norovirus outbreak.  Only 5 passengers were still suffering from the illness at the time the ship arrived back in port.  Read full statement on Princess.com.

There has been a confirmed norovirus outbreak on the Caribbean Princess.  Out of the 3102 passengers on board, 162 (5%) have reported ill in addition to 11 crew members.  The cruise ship will return to Houston one day early and arrive on January 31 due to a fog advisory.

When the ship returns to Houston, Texas, 2 CDC Vessel Sanitation Program environmental health officers will board the ship for a health assessment.  They will evaluate the outbreak and collect specimens for testing at the CDC lab.

The cruise ship will also undergo an extensive cleaning and the embarkation for the February 1, 2014 cruise will be delayed.  Symptoms of the norovirus are diarrhea, nausea, and vomiting.  Passengers who catch the virus are confined to their cabins to help keep the sickness from spreading.

Illnesses such as the norovirus are easily spread on cruise ships due to a large amount of people in a small area.  There has been a lot of debate in the past few weeks about who is responsible for spreading the norovirus on cruise ships.  Passengers not washing their hands, contaminated food, sick passengers lying on the medical form, and sick workers have all been blamed.

“Caribbean Princess is being forced to return to Houston one day early because we were informed that dense fog is expected to close the port for much of the weekend, and we are mindful of our passengers’ safety and comfort, as well as the disruption the port’s closing will have on their onward travel plans. This has, unfortunately, necessitated the cancellation of the scheduled call to Belize.  The seven-day cruise, which departed January 25, is sailing on a Western Caribbean itinerary, also calling at Cozumel and Roatan.

We truly regret having to make this change to our passengers’ vacations, and we hope they understand that we did not have any choice but to return to Houston early before the unusually heavy fog closes the port.

Passengers will now disembark and proceed through the standard Customs and Immigration clearance that occurs at U.S. turnaround ports on Friday, January 31.  Passengers with scheduled air flights from Houston will be accommodated overnight at local hotels by Princess, and they will receive a future cruise credit of 20% of their fare, as well as one day per diem to help offset any ancillary expenses such as meals.

Simultaneously, onboard the current sailing, Caribbean Princess has experienced an increase in the number of cases of gastroenteritis among passengers, which has been confirmed to be norovirus, a common but contagious illness which is widely circulating throughout North America.  Because of the increased sensitivity surrounding norovirus by both cruise lines and the Centers for Disease Control (CDC) in this winter season, we notified the CDC who will be boarding on Friday to ensure all appropriate measures are followed for an extensive sanitation of the ship prior to the next cruise departing February 1.  Approximately five passengers have current active symptoms of norovirus, and over the course of the cruise 165 passengers reported ill to the medical center.”

Ever wonder why you hear about norovirus outbreaks on cruise ships?  That is because cruise lines are required to report to the CDC if more than 2% of the passengers and crew members become sick.  If the number crosses the 3% mark, it is officially considered an outbreak.  Schools, college dorms, and other areas where the norovirus quickly spreads do not have to report to the CDC.

The Caribbean Princess is currently on a 7 night cruise to the Western Caribbean out of Houston, Texas.  The ship had stops in the ports of Cozumel, Mexico; Roatan, Hondoras; and Belize City, Belize.

This latest outbreak comes just days after Royal Caribbean had to end a 10 night cruise early after a large norovirus outbreak on the Explorer of the Seas when over 600 were reported sick.  Royal Caribbean offered refunds of 50% of their cruise fare and a future cruise credit.

The Caribbean Princess is a 3,000 passenger cruise ship that went into service in April, 2004.  The 113,000 gross ton ship has 17 decks (15 for passengers) and was the first modern cruise ship to have an outdoor theater.

Cruise Fever will continue to monitor this latest outbreak and will update this page as more information becomes available.

Ben Souza
Ben is a world traveler who has visited 40+ countries and taken over 70 cruises. His writings have appeared and been cited in various media outlets such as Yahoo News, MSN, NPR, Drudge Report, CNN, Fox, and ABC News. Ben currently resides in Cincinnati, Ohio. Follow Ben on Instagram. Visit Ben Souza on Linkedin. You may email Ben at [email protected]
Cruise NewsCruise Ship Back In Port After Norovirus Outbreak; 173 Sick On The...
Previous article
Carnival Cruise Line Headed Back to Port of Baltimore
Next article
Norovirus Outbreaks on Cruise Ships, What Gives?