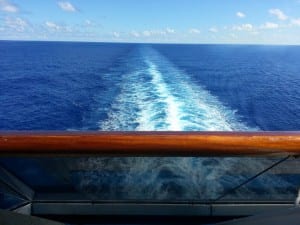 The number of passengers/crew members going overboard on cruise ships have surged in the past few weeks. While it does happen from time to time, there have been 5 separate reported accounts over the past 3 weeks.

If you have ever been on a cruise ship, you will know that you don’t just accidentally fall over a railing of a ship and into the water.  The two main reasons for overboards are alcohol (combined with horseplay) and suicide.

This recent trend started on December 21 when a man went overboard Royal Caribbean’s Rhapsody of the Seas 300 miles off the coast of Australia.  The crew attempted a rescue but the passenger was dead by time he was found.

On December 29, a passenger on the Adventure of the Seas saw another passenger jump from the 6th deck balcony into the water as the ship was sailing to Puerto Rico.

On January 1, a Canadian man went missing during the night on yet another Royal Caribbean ship, the Independence of the Seas.  It is believed that he fell overboard near the Cayman Islands.  The U.S. Coast Guard aided in the search but his body was never found.

Over the past weekend an elderly woman went overboard on Holland America’s ms Veendam.  An eyewitness said that he saw the woman lean over the balcony and lean and jump over.  The ship began a search and rescue but the body was never found.

The 5th overboard in the past 18 days happened last night on the Grand Princess.  The cruise ship is currently on a 14 night cruise to Hawaii.  A 34 year old Filipino crew member jumped overboard according to the ship’s surveillance footage.

Due to the amount of time it takes for a cruise ship to turn around after someone goes overboard, the odds of survival are extremely low.  Although the Coast Guard and any other ships in the area will aid in a search and rescue mission, the bodies are seldom found.