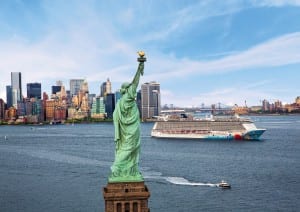 The Norwegian Breakaway has been voted the best new cruise ship in the 2013 Cruise Fever Fan Awards in a very close vote over the Royal Princess.   Voting took place on CruiseFever.net and concluded on December 31, 2013.

The Norwegian Breakaway became the largest cruise ship to sail out of the Port of New York when the ship began sailing to Bermuda in the spring of 2013.  The Breakaway combines the best of New York City and with the newest amenities at sea.  The ship has over 20 dining options (9 complimentary) including seafood restaurants by celebrity chef Geoffrey Zakarian.

The Waterfront on the Breakaway is a quarter mile long oceanfront promenade that is loaded with restaurants, bars, and the best views at sea.  After dinner, passengers can take in Broadway shows such as Rock of Ages and Burn the Floor.

The Royal Princess finished right behind the Breakaway in a close 2nd place.  The Princess was christened by the Duchess of Cambridge on June 13, 2013.  One of the most popular new features on the 3,600 passenger ship is the SeaWalk. The Seawalk extends 28 feet from the starboard side of the ship and 128 feet over the ocean.  This glass bottomed walkway allows passengers unique views of the ship in a breathtaking experience.

The 4,000 passenger MSC Preziosa finished 3rd in voting.  The readers of Cruise Fever were allowed one vote in the Fan Awards.  Multiple votes from the same IP address were discarded and voting took place in 2013.

The Caribbean was voted the top cruise destination with St. Thomas gathering the most votes for best cruise port in the Caribbean.

Voting in the 2014 Cruise Fever Fan Awards will begin this spring.  Among the new cruise ships that will make their debut this year are Royal Caribbean’s Quantum of the Seas, the Norwegian Getaway, the Regal Princess, and the Costa Diadema.