Royal Caribbean has announced plans to send their first Quantum Ultra-class cruise ship to Asia.  The currently unnamed ship is scheduled to debut in the spring of 2019. 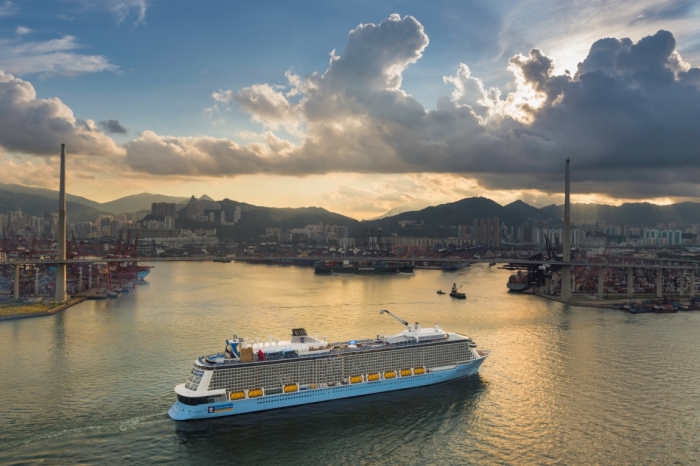 This fourth Quantum class ship will join sister ships, Ovation of the Seas and Quantum of the Seas, in Asia.

With nearly a decade since Royal Caribbean’s first cruise in China, the cruise line further bolsters its commitment to the market by dedicating a lineup of its most technologically advanced ships to the rapidly growing market. The new ship will specifically be designed for guests in the region, featuring even more cutting-edge and unprecedented experiences and amenities.

As part of the deployment plans for 2018-19, Mariner of the Seas will reposition to a new home in Miami, Florida embarking on a “Global Odyssey” from Asia that features three long sailings from Singapore to Dubai; Dubai to Barcelona; and Barcelona to Miami. The “Global Odyssey” opens for sale on May 2, 2017.  Voyager of the Seas will have her first full season in Singapore in 2018-19, offering 3- to 7-night adventures throughout Southeast Asia with stops that include ports in Thailand and Malaysia.

The new 2018-19 deployment season presents additional highlights, including an expanded offering of open-jaw itineraries for adventure-seekers traveling down under with new 10-night open-jaw itineraries between Auckland, New Zealand and Melbourne or Sydney, Australia on Radiance of the Seas. During the winter, Ovation of the Seas will reposition to Sydney for her longest season in Australia, reclaiming the title as the largest ship based in the region.

Royal Caribbean’s China 2018-19 itineraries for Quantum and Voyager will be available to book beginning April 26, 2017, followed by Ovation on April 27. Australia and Singapore sailings will be open as of May 16, 2017.

Quantum of the Seas will continue to sail from Shanghai for the fourth consecutive season, offering 78 sailings to and from Japan, beginning January 2018.

Ovation of the Seas will return to Tianjin, China for its second season, offering a rich lineup to explore the best of Japan, including two new ports for the ship: Sasaebo and Shimonoseki.

Voyager of the Seas will offer a combined total of 77 sailings from Singapore, Hong Kong and Shenzhen, China, offering countless adventures across Southeast Asia, beginning April 30, 2018.

Journeys in Australia and South Pacific

Ovation of the Seas – the largest and most technologically advanced ship to sail in Australian waters – will sail from Sydney, Australia for its third and longest season in the country, offering 13 sailings beginning November 2018.

Radiance of the Seas will have an expanded open-jaw program with three new itineraries venturing out into Australia in 2019.

Explorer of the Seas will join Ovation of the Seas for her fourth season based in Sydney with 23 sailings exploring the island destinations of the South Pacific and Fiji.

Ben Souza
Ben is a world traveler who has visited 40+ countries and taken over 70 cruises. His writings have appeared and been cited in various media outlets such as Yahoo News, MSN, NPR, Drudge Report, CNN, Fox, and ABC News. Ben currently resides in Cincinnati, Ohio. Follow Ben on Instagram. Visit Ben Souza on Linkedin. You may email Ben at [email protected]
Cruise NewsRoyal Caribbean Sending First Quantum Ultra-Class Cruise Ship to Asia
Previous article
Sports Adventures in Cozumel, Mexico: Fun Things to do While on a Cruise
Next article
Norwegian Cruise Line Takes Delivery of Their 15th Cruise Ship