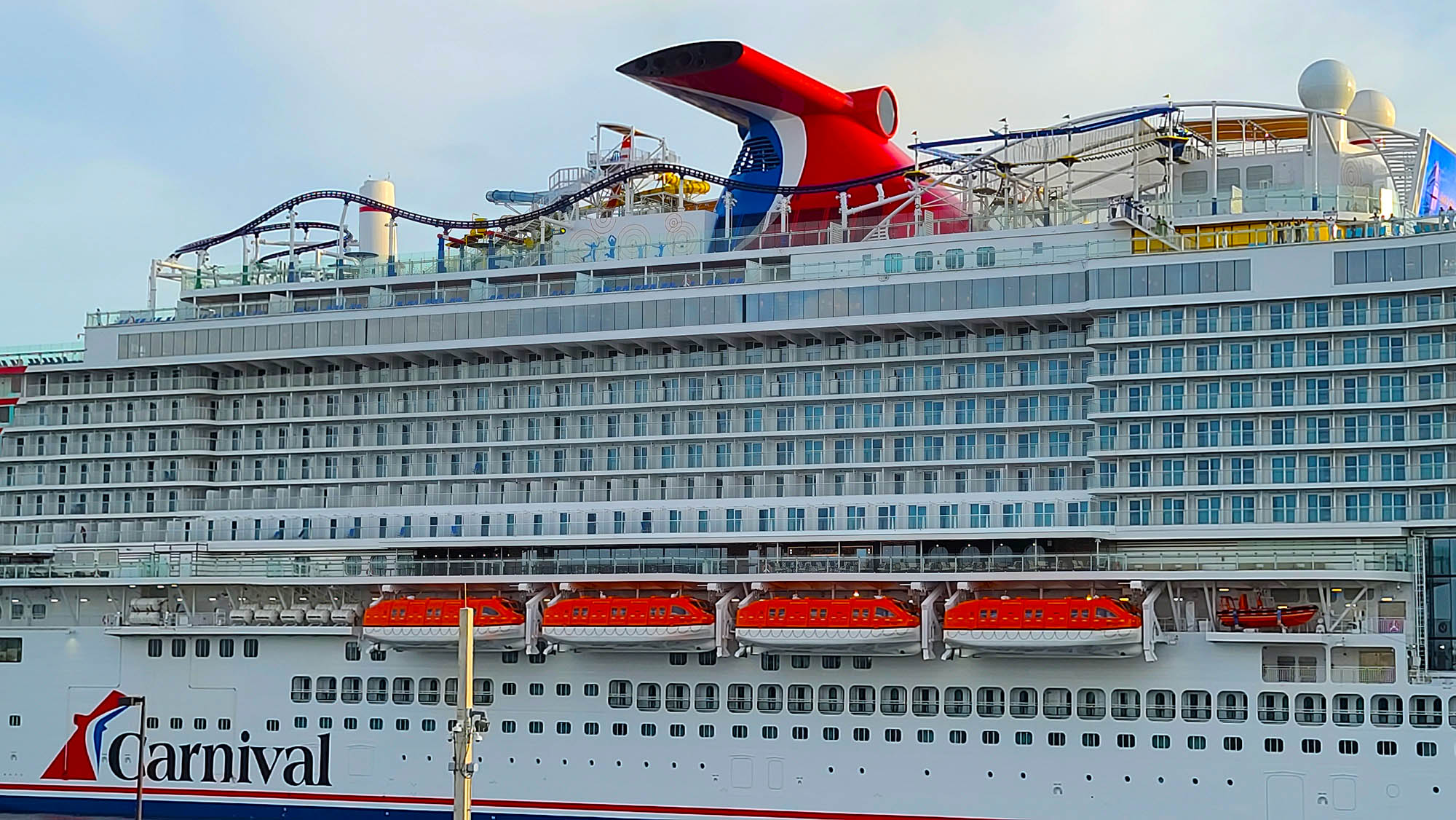 Mardi Gras is not only the first cruise ship in North America to be powered by LNG, it is also the world’s first cruise ship with a roller coaster. I am sailing as a guest of Carnival Cruise Line and after 24 hours on board, here are my first impressions of the ship.

This is my sixth cruise since cruises restarted to Americans this summer. Embarkation wasn’t the worst of all six cruises, but it also wasn’t the best. I arrived right when my allotted time slot opened and it still took roughly an hour to get checked-in and onto the ship.

I do love Carnival’s new Terminal 3 at Port Canaveral as it is modern and really roomy.

Cruise lines have radically changed the muster drill and have taken all misery out of it. Carnival’s was the easiest and quickest out of all cruise lines that I have traveled on this summer.

After boarding, you go to your muster station at your convenience. You check in, they give you a one minute demonstration on how to put on your life jacket, and that’s it. It’s pretty awesome and there are also videos for you to watch on the HUB App.

This is not my first time on board, I spent six hours on the ship when Carnival Cruise Line hosted a media day before the cruise ship sailed its inaugural voyage. Mardi Gras is by far the largest ship in Carnival’s fleet and it is unlike any other of the cruise line’s ships.

When walking around Mardi Gras, you don’t feel like you’re on a Carnival cruise ship. It has a more premium feel and there are tons of public areas. I’m really loving it so far.

I am staying in balcony cabin 10234 and I love the all of the features in the room. The shower is roomier than other Carnival ships and has glass doors. The balcony is also larger than the typical Carnival balcony and there are a ton of power outlets. There is a USB port on each side of the bed. On the desk, there are three 110 power outlets and four more USB ports. As someone who travels with a lot of gear that needs charging each day, all of these power outlets are really nice to have.

The balcony doors slide so you avoid the slamming of doors while you sit on your balcony.  It makes for a more peaceful experience as you sit out and enjoy the views of the Caribbean.

Chris Williams, aka The Flying Scotsman, really brings the energy on board. Since most cruise ships are currently sailing at a reduced capacity, the energy at sailaway parties and in other venues hasn’t been the same since cruises resumed. However, that is not the case here on Mardi Gras.

The sailaway party hosted by the Flying Scotsman had the energy of pre-covid cruises. It was as if cruises hadn’t paused for 15 months and the cruise director plays an important part of creating the fun even though the ship is far from capacity. Everyone is so excited to be on board and sailing again with Carnival Cruise Line.

There are over 20 places to eat on Mardi Gras and I have only begun to scratch the surface of what’s on board. I will have more on all of the best places to eat when I get home from the cruise. One thing is for sure, no one who cruises on this ship will go hungry.

The WiFi has been a pleasant surprise and has been far better than other cruise lines I sailed on this summer. I did a speed test this morning and the download speed was 20 Mbps. It’s been pretty awesome so far and I’ve been really happy with it.

Two of the other cruise lines I sailed on this summer promote how they have “land like speeds” and “the best WiFi at sea”. The WiFi on Mardi Gras has been miles better so far than both of those cruise lines.

The HUB App now plays an important part of the cruise here on Mardi Gras. One of my favorite features is how you can place yourself in a virtual queue for meals so you don’t have to wait in line. I did it for lunch today at the Italian restaurant on board Cucina Del Capitano. When my table was ready, I received a notification and walked to the restaurant and already had my table number. It’s a really nice feature.

There is also a virtual queue for guests services so you don’t have to wait in line.

I am going to go now and explore more of this great new ship from Carnival Cruise Line. After the cruise, I will have a complete review of the ship here on Cruise Fever that will include everything from BOLT the roller coaster to entertainment and dining options.