It’s been nearly four months since the last cruise ship departed from PortMiami with paying passengers on a cruise to the Bahamas/Caribbean due to the COVID-19 pandemic.

PortMiami is the Cruise Capital of the World and sees more cruise passengers pass through the port than any other cruise port in the world.  The port saw 6.8 million cruise passengers in 2019 and was expected to see even more this year before all cruises were shutdown.

PortMiami is currently in the middle of a massive construction boom with several new cruise terminals and cruise line headquarters being built. The Miami Herald published an article earlier today and gave updates on construction project as they interviewed PortMiami’s Port Director Juan Kuryla.

Royal Caribbean, Norwegian Cruise Line, Virgin Voyages, and MSC Cruises are all in the middle of construction projects at the port.

Norwegian Cruise Line’s new Terminal B will finally be completed this month.  The new terminal was originally scheduled to open last November but the opening date was pushed back until May. The terminal will now be finished sometime in July.

Virgin Voyages’ new Terminal V will remain on its current timeline and will open in November 2021.  Up until now, a timeline had not been given for the opening of Terminal V.  The cruise terminals completion will happen before Virgin’s second cruise ship visits the port.

I just looked at PortMiami’s webcam and you can see some construction finally underway where the terminal will sit.

Work on Royal Caribbean’s new headquarters stopped in May. All workers and cranes have been pulled off the site.

Kuryla said in his interview with the Miami Herald that the timelines for these projects is being re-negotiated.

Carnival Cruise Line is also planning a massive renovation to their cruise terminals in Miami.

It’s safe to say that all projects that have yet to get started or that are in the early stages of construction will be put on hold until the cruise industry can resume cruises. 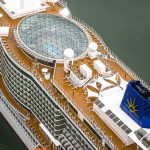