Norwegian Cruise Line’s largest cruise ship, Norwegian Escape, left the Meyer Werft shipyard on Friday for a 24 hour conveyance on the Ems River to the North Sea.  The ship will be the fifth largest in the world when she goes into service in a little over a month. 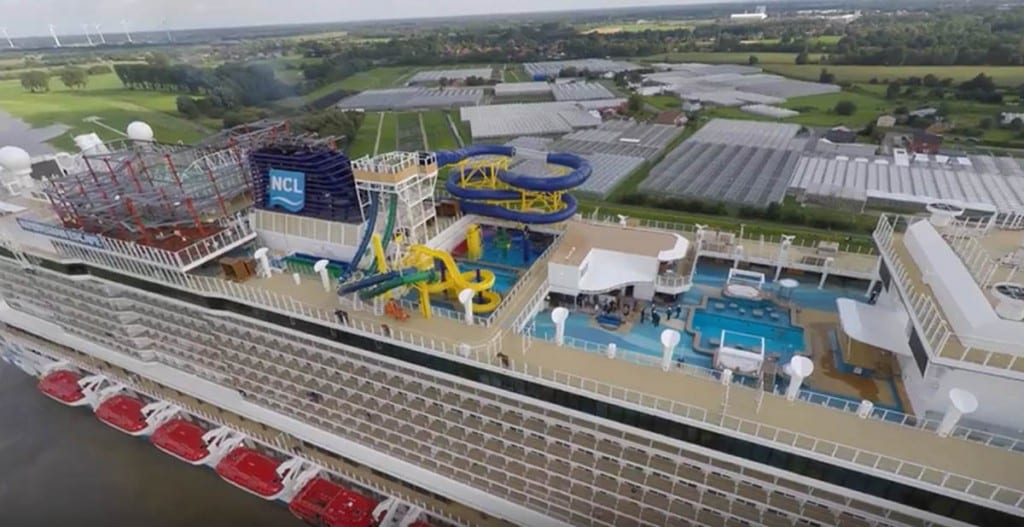 At 164,600 gross tons, the 4,200 passenger Norwegian Escape is the largest cruise ship ever built by Norwegian Cruise Line, and will be the largest non Royal Caribbean ship at sea.  The ship is a little more than 6 feet wider than the Breakaway class ships and has one extra deck.  Norwegian Escape will feature the largest water park and ropes course at sea.  Watch the video below that shows the ship leaving the shipyard and some great aerial footage of the vessel.

Norwegian Escape will homeport in the cruise capital of the world, Miami, Florida, and sail week long cruises to the Caribbean starting November 14, 2015.  While parts of the ship are nearing completion, parts of the vessel are still under construction. Gene Sloan from USA TODAY took a tour of the Norwegian Escape earlier this week.  He posted 25-30 photos from the inside and outside of the ship giving a great first look at the vessel.
Sponsored Links

Norwegian Escape will have the following features:

The first passengers will board Norwegian Escape on October 25 for a two night cruise from Hamburg. The ship will leave Southampton, England on October 29 for a 10 night Transatlantic cruise to Miami, Florida.