NCL Announces Entertainment for the Breakaway 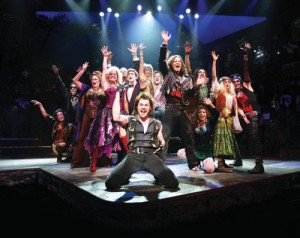 Norwegian Cruise Line has been slowing announcing details about the Norwegian Breakaway that is scheduled to begin sailing in the Spring of 2013.  The latest announcement details the entertainment that will be on board the cruise ship. Once again, NCL does not disappoint as the Breakaway won’t be any ordinary cruise ship.

Five-time Tony Award nominated musical ROCK OF AGES will be the headline show on the ship.  Along with ROCK OF AGES, two additional Broadway shows, CIRQUE DREAMS JUNGLE FANTASY, and the dance sensation BURN THE FLOOR will be featured.

Rounding out the entertainment will be New York’s own Slam Allen, Howl at the Moon and The Second City.

In addition to the entertainment, Norwegian also announced that Food Network Star Geoffry Zakarian will create and oversee three different restaurants on board.  The restaurants will be Ocean Blue by Geoffrey Zakarian (seafood), The Raw Bar, and Ocean Blue on the Waterfront.

The Breakaway will be a 4,000 passenger cruise ship that will begin sailing in the Spring of 2013.  The ship will be the largest cruise ship to sail out of the Port of New York City and sail weeklong cruises to Bermuda and the Caribbean.