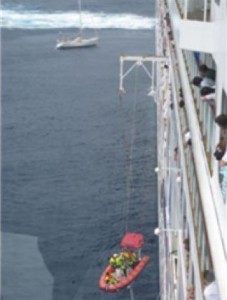 Captain Kenneth Harstrom received word from the U.S. Coast Guard that Avenir, a sailing yacht, had lost its rudder.  The boat had lost all steering capability and was at the mercy of the sea.  The captain immediately turned the ship around and rescued the three men and three women who were on the yacht.

The 41-foot yacht was on its was to Newport, Rhode Island from Bermuda.  The boat was 230 miles into the journey when the problems began.  The crew tried to rig a temporary rudder without success.   After several of the crew became extremely seasick, the captain called the called the U.S. Coast Guard for help.

The crew of the Star worked together to hoist the 6 to safety aboard the cruise ship.

The 2,350 passenger Norwegian Star was on her way to Bermuda for a week long cruise after leaving the Port of New York on Sunday.

It is not uncommon for cruise ships to aid when other sea vessels have problems.  In early April, the Oasis of  the Seas rescued 23 Cubans  from a disabled boat near the Cayman Islands.

Several weeks later, the Star Princess made headlines for ignoring a disabled Panamanian fishing vessel and was sued after 2 of the 3 men died after several weeks at sea.

Cruise Fever will continue to update this story as more information becomes available.

Ben Souza
Ben is a world traveler who has visited 40+ countries and taken over 70 cruises. His writings have appeared and been cited in various media outlets such as Yahoo News, MSN, NPR, Drudge Report, CNN, Fox, and ABC News. Ben currently resides in Cincinnati, Ohio. Follow Ben on Instagram. Visit Ben Souza on Linkedin. You may email Ben at [email protected]
Cruise NewsNorwegian Star Rescues 6 from Stranded Sailboat
Previous article
What is the Best Cruise Line?
Next article
NCL Announces Entertainment for the Breakaway