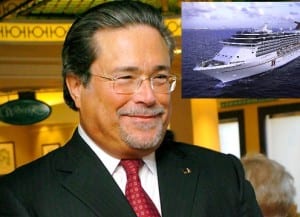 After a bumpy few years for the cruise giant Carnival Cruise Lines, the company will be getting rid of its current CEO, Micky Arison.

Today, Carnival announced that the new CEO will replace Arison after 34 years with the same man in the position, and upon hearing the news investors sent the companies stock  (CCL) soaring 4%.

Arison will stay on as Chairman for the company and the new CEO will be company board member Arnold Donald, who will start his new job role on July 3rd.

A series of highly publicized cruise accidents have tarnished the cruise line’s image across the world and investors and cruisers alike are hoping for a renewed confidence in the company with the new CEO.

Arison is also owner of the Miami Heat who just won an NBA championship.  Earlier this year, Arison was criticized for attending a Miami Heat game while passengers aboard the powerless Carnival Triumph were struggling to make it back to land.

“I’m going to be looking to Arnold to run the day-to-day corporate operations and I may even take a couple of golf lessons,” Arison, 63, said on an analyst call when asked how involved he would remain in the company’s operations.

The new CEO, Arnold Donald, has had some CEO experience before when previously took the helm for artificial sweetner company, Equal.  Since then, he has primarily served as a director of several companies, including Bank of America Corp

Carnival has an uphill climb in terms of getting it’s share price up where investors will be more inclined to jump on board.  But many loyal cruisers are quick to overlook the media hype.  The Carnival cruise ship that was crippled at sea is now completely booked as cruisers can’t wait to be among the first to sail with the Triumph again.

While some have estimated that Carnival’s recovery would take 3 or more years, there are already signs that the company is rebounding.

So what do you think of Carnival getting a new CEO?  Does it matter to you at all, or would you sail with Carnival anytime?

J. Souza
Jon got hooked on cruising after his first cruise on his honeymoon, and today he is always looking for cruise deals and reading information about the cruise industry. Jon lives in the foothills of North Carolina and wishes there were a cruise port that far inland. Jon can be reached at [email protected]
Cruise NewsCarnival Cruise Line Gets New CEO After 34 Years With Micky Arison
Previous article
Traffic Warning for Cruise Passengers on June 24 Due to Miami Heat Championship Parade
Next article
Tropical Storm Chantal has Cruises to Caribbean on Alert