Cruise News Traffic Warning for Cruise Passengers on June 24 Due to Miami Heat... 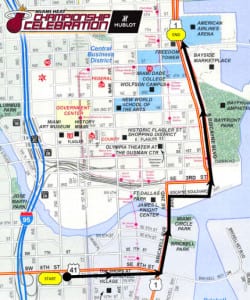 Cruise passengers who are scheduled to embark on a cruise out of the Port of Miami on Monday, June 24 should allow plenty of extra time to arrive at the port. The Miami Heat 2013 Championship Parade is set to take place at 11:00 am on Monday and many roads around and near the port will be closed for several hours.

Traffic will affect cruise passengers who are sailing on the Norwegian Sky, Royal Caribbean’s Majesty of the Seas, Carnival Imagination, and the Carnival Victory.

The parade route will take the exact same route as the 2012 parade and will travel up S. Biscayne Blvd.  Cruise lines are advising passengers to arrive between 8:30 a.m. and 10:30 a.m., or between 1:00 pm and 4:00 pm. Royal Caribbean released a statement saying that check-in will take place between these times.  Vehicle access to the port from 10:30 a.m. until 1:00 p.m. will be cut off.

One passenger who took cruise out of Miami during last year’s parade said that it took them 4 hours to get from their hotel to the port.  The cruise lines have stated that the ships will sail on time so passengers need to make arrangements to ensure they can make it in time for sailing.  Extremely heavy traffic should before 9:30 a.m.

What are you best options if you are sailing on one of these four cruises?  The best bet is to arrive at the port really early to beat traffic and just make the best of it.

The parade will start at 11:00 a.m. at the corner of SW 8th St and 2nd Ave, head east on 8th Street and then north on Brickell Avenue.  The parade will continue across the bridge and north on Biscayne Boulevard and end at American Airlines Arena  for a victory rally at 12:30 p.m.

Ben Souza
Ben is a world traveler who has visited 42 countries and taken over 50 cruises. His writings have appeared and been cited in various media outlets such as Yahoo News, MSN, NPR, Drudge Report, CNN, Fox, and ABC News. Ben currently resides in Cincinnati, Ohio. Follow Ben on Instagram. Visit Ben Souza on Linkedin. You may email Ben at [email protected]
Cruise News Traffic Warning for Cruise Passengers on June 24 Due to Miami Heat...
Previous articleCarnival Triumph Repairs Completed, Cruises Resume Out of Galveston
Next articleCarnival Cruise Line Gets New CEO After 34 Years With Micky Arison