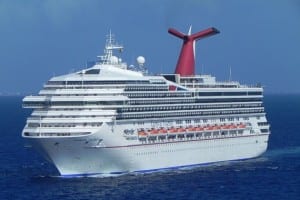 Four months after the Carnival Triumph had a fire break out in one of the ship’s engine rooms causing the ship to lose power and drift in the Gulf of Mexico, the Carnival cruise ship is embarking on its first cruise since February.

The cruise is a sold out 4 night cruise out of Galveston, Texas that will go to the Western Caribbean and stop in the port of Cozumel, Mexico.  Carnival has spent the past 4 months spending $115 million to repair the ship and add Carnival’s signature Fun Ship 2.0 upgrades to the vessel.

In addition to the 2.0 upgrades, the Triumph has been outfitted with an upgrade in fire detection system, additional backup power that will provide needed hotel services in the case of a power outage, and improved reliability in preventing a total loss of power.

What are the Fun Ship 2.0 features that were added to the Triumph?

The Triumph will resume 4 and 5 night cruises to the Western Caribbean out of Galveston, Texas.  The 5 night cruises will make a stop  in the port of Progreso, Mexico in additional to Cozumel.  The ship has been in dry dock in Mobile, Alabama and Freeport, Bahamas since the ship lost power in February.  The cruise ship returned to Galveston on Tuesday, June 11, 2013.

The Triumph returning to Galveston brings back much needed revenue for the port.  The 14 sailings that were canceled cost the port an estimated $700,000 in revenue according to port officials. Local businesses are also happy to have the cruise ship back in port and to see tourists returning to the area.

Many wondered after the bad press the Triumph received across all major news networks after the fire if cruisers would book cruises on the ship.  That doubt can be laid to rest as Carnival has confirmed that the first 2 cruises have been completely sold out.  Cruise Fever checked other sailings this summer on the Triumph and many others have only a few staterooms remaining.