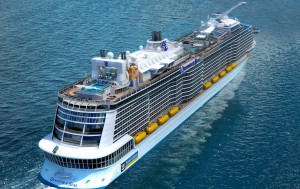 Royal Caribbean has announced that they have signed a contract with the Meyer Werft shipyard to build a 3rd Quantum Class cruise ship.  The ship is scheduled to be delivered in mid 2016 and the terms and price of the deal are similar to the first two Quantum Class ships.  The contract is subject to financing conditions.

RCCL has not yet announced what they will call this third Quantum ship.  The first two will be named the Quantum of the Seas and Anthem of the Seas. These three ships are part of Project Sunshine that Royal Caribbean first announced in the spring of 2012.

The Quantum of the Seas will begin sailing in 2014 and the Anthem will follow a year later.

The ships will have a total of 16 decks that will keep with the Royal Caribbean motto, “Designed for WOW”.  They will hold over 4,000 passengers and come in at 167,000 gross tons, making them the largest cruise ships in the world behind the massive Oasis Class ships which are also owned an operated by Royal Caribbean.

These new ships will offer on board experiences that have never before been seen on cruise ships.  These features include a skydiving experience, the largest indoor sports and entertainment complex, bumper cars, and the largest cabins in Royal Caribbean’s fleet.  The interior rooms will have a virtual balcony that gives every stateroom on the ship a view.

Adam Goldstein, president and CEO of Royal Caribbean International, said “We are encouraged by the very positive response we received from travel agents and consumers when we first announced some of the unprecedented offerings on Quantum Class last month. The Quantum class will offer vacationers more unexpected activities in the most extraordinary spaces, and a third ship will offer even more opportunities for vacationers to experience Quantum cruising.”

These three new ships are in addition to a third Oasis Class ship that Royal Caribbean ordered and is scheduled for delivery in mid 2016.