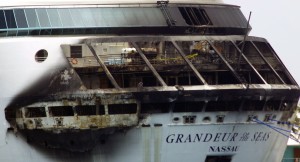 Update May 29 6:00 pm:  Royal Caribbean has announced that the next 6 sailings on the Grandeur of the Seas have been canceled.  Guests who were booked on these sailings (June 6 – July 5)  will received a full refund as well as a certificate for 25% off a future cruise.  The ship is scheduled to return to service for the July 12, 2013 sailing.  Guests who were scheduled to be on these sailings can call a dedicated hotline number (1-888-824-0012) or their travel agent.

Update May 27 8:20 pm:  Royal Caribbean has canceled the May 31st sailing on the Grandeur.  Guests who were scheduled to sail on this cruise will receive a full refund and a certificate for 50% off a future cruise. RCCL will provide an update by the end of the week regarding cruises in June/July.

An early morning fire on board Royal Caribbean’s Grandeur of the Seas sent passengers to their muster stations for several hours until the fire was extinguished.   The fire was put out by 5 am and most of the passengers were able to return to their cabins.

Royal Caribbean has canceled the remainder of the cruise and will be flying all passengers back to Baltimore on Tuesday, May 28.   Passengers on board will receive a full refund of their cruise fare and a certificate toward a future cruise (equal to the amount they paid for the current cruise).

Royal Caribbean has yet to announce what caused the fire but did say that all passengers and crew members were accounted for.  The cruise ship is currently in Freeport, Bahamas and guests who are unable to stay in their cabins will be put up in hotels.

There are reports of smoke and fire damage to several decks of the ship and RCCL has yet to make an announcement concerning future cruises on the cruise ship.  They are assessing the damage and should make a decision shortly on upcoming cruises.  However, it is likely that the next several cruises will be canceled for repairs.

The fire started in aft mooring deck and spread to the crew lounge on the 4th deck.  The ship’s engine, power generators, propulsion and communication systems were not affected by the fire.

There were no serious injuries reported on the ship.  Several passengers needed medical staff for fainting, high blood pressure, and one passenger sustained a strained ankle.

The Grandeur of the Seas left Baltimore on May 24 for a 7 night cruise to Florida and the Bahamas.   The ship was scheduled to stop on RCCL’s private island Coco Cay today but sailed to Freeport instead to undergo evaluations.  The ship has been in service since 1996 and can carry up to 2,400 passengers.

2013 has been a rough year for cruise lines.  Earlier this year, the Carnival Triumph had a fire break out in one of the ship’s engine rooms causing the room to lose power.  A few other Carnival ships had propulsion problems that caused quite a bit of negative feedback on the cruise line and industry.

Cruise Fever will continue to monitor the situation and will update this page as more information becomes available.