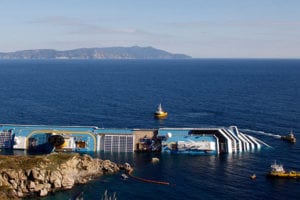 The cruise industry was rocked on a Friday night in January when the cruise ship, the Costa Concordia, hit a reef off the coast of Italy killing 32 passengers and crew members.  Images of the cruise ship half submerged in water were plastered all over the internet, TV newscasts, and on social media sites.

These images frightened those who have never taken a cruise vacation leading to cruises being canceled and a temporary slowdown in new bookings.  A travel agent with KHM Travel reported that every one of her clients who had a cruise booked called and canceled in the days following the Concordia accident.

Who can blame them?  In the year of the 100th anniversary of the sinking of the Titanic, the 2nd worst cruise disaster of all time was constantly in the news.

When several of the cruise lines (Carnival, Royal Caribbean) reported lower bookings, many travel agents and cruise experts expected that the cruise lines would need to slash prices to keep the ships full.   Reports of  fires breaking out on the Costa Allegra, Azamara Quest, and Allure of the Seas in the weeks following helped fan the flames of fears that many had about cruising.

While cruise lines are offering some terrific deals on cruises, the steep discounts that many had hoped for have not been offered.  Cruise ships continue to sail near capacity as newer and largest ships are being christened.

The fears that many had after the Concordia accident have begun to diminish as the cruise lines and CLIA have announced new safety regulations and mandatory muster drills before sailaway.

While there is still the occasional news update about the Concordia, most cruisers have adopted the slogan, “Out of sight, out of mind”.  A look at Google Trends shows the gradual decrease in searches and news reference volume for “Costa Concordia”.

Cruising remains one of the safest ways to take a vacation as more than 19 million passengers are expected to embark on a cruise in 2012.

While we will never forget the 32 lives that were lost on that January night in Italy, we look forward to the future of the cruise industry as cruise ships become bigger and better.

Ben Souza
Ben is a world traveler who has visited 42 countries and taken over 50 cruises. His writings have appeared and been cited in various media outlets such as Yahoo News, MSN, NPR, Drudge Report, CNN, Fox, and ABC News. Ben currently resides in Cincinnati, Ohio. Follow Ben on Instagram. Visit Ben Souza on Linkedin. You may email Ben at [email protected]
Cruise NewsCruise Industry Recovering from the Costa Concordia Accident
Previous article
NCL Continues to Improve Great Stirrup Cay
Next article
The Cost of Cruising with Infants and Young Children