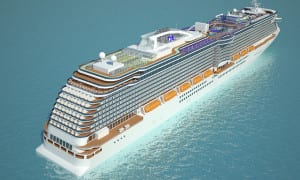 There are many new cruise ships scheduled to begin sailing in 2013.  These ships range from the two most anticipated ships, the Norwegian Breakaway and the Royal Princess, to a host of river cruise ships that will cruise in Europe.

The headline show on the Breakaway is the Broadway show, Rock of Ages.  Since the ship will be sailing year round from Manhatten, the ship has a NYC vibe to it and will even have Sabrett hot dogs served onboard.  The Breakaway will have 5 waterslides, a massive sports complex on the top deck of the ship that will include a ropes course, rock climbing wall, basketball court and an adults only retreat.  Suite passengers will have access to “The Haven” that includes a private pool, concierge and butler service, and a restaurant that is only available to guests staying in suites.

The Royal Princess will be the largest Princess cruise ship when she sets sail on June 10.  The ship will be the first of two Royal Class ships and will hold 3,600 passengers.  One of the most talked about features of the Royal Princess is the SeaWalk.  The SeaWalk will be a glass enclosed walkway that will extend 28 feet over the edge of the ship.  This walkway will be 128 feet above the water and will provide views that will be one of a kind on cruise ships.

Princess Cruises is famous for their Piazza and the one on the Royal Princess will be 50% largest than the current ones in their fleet.  The ship will have new dining features such as a crab shack and a  fondue dispensary.  Both of these features will be buffet style and will include a surcharge.

The MSC Preziosa was launched on March 23 as the last Fantasia Class ship from MSC.  This 3,500 passenger ship will sail in the Mediterranean and the Caribbean, depending on the season.  The Preziosa has the longest water slide (42 feet high and 394 feet long) on any cruise ship.  The ship was built with MSC’s signature Yacht Club, for passengers who want luxury and exclusivity.

The AIDAstella is a 2,000 passenger ship that is sailing in Northern Europe and the Baltic.  This ship is the seventh in AIDA Cruise’s Sphinx class ships.  AIDA Cruises is owned and operated by Carnival Corp.

For those who want to cruise to the Arctic, Ponant Cruises is launching the Le Soleal in July.  This 260 passenger luxury ship will sail from Greenland and offer views of glaciers, Arctic nature, and unparalleled views of the aurora borealis.