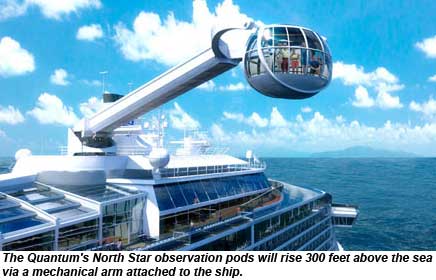 Royal Caribbean is once again raising the bar.  Their newest ship, Quantum of the Seas, will have more amenities and more dazzling displays than any other of its ships.   Some of the new attractions will be a skydiving simulator, bumper cars, a huge wall of screens that change the view throughout the day, and the North Star, which is a jewel shaped capsule that will take passengers 300 foot above sea level.  The North Star concept was inspired by the London Eye.

The two ships being built by Royal Caribbean as part of its “Project Sunshine” are Quantum of the Seas and Anthem of the Seas.  Although the ships will not be as large as the Oasis of the Seas or Allure of the Seas, the 4,180 passenger ships will have more technology, features, and dazzle than any ships currently sailing.

Watch this video to see some of the features of the Quantum of the Seas.

“The new ship will be such a leap forward in terms of vessel design and guest experiences that we thought the name Quantum of the Seas was perfectly appropriate,” said Adam Goldstein, president and CEO of Royal Caribbean International.

So what do you think of this new ship?  Anything you would love to try on it?  Any changes you would make?  Let us know in the comment section below.

J. Souza
Jon got hooked on cruising after his first cruise on his honeymoon, and today he is always looking for cruise deals and reading information about the cruise industry. Jon lives in the foothills of North Carolina and wishes there were a cruise port that far inland. Jon can be reached at [email protected]
Cruise NewsRoyal Caribbean Introduces Quantum of the Seas With Skydiving, Bumper Cars, and...
Previous article
New Cruise Ships for 2013
Next article
Prices Drop on Carnival Cruises after Problems at Sea