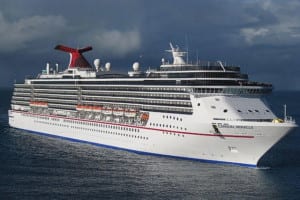 The 2013 Alaskan cruise season has begun as the Carnival Miracle and Holland American’s MS Volendam brought the seasons first cruise passengers to Juneau, Alaska.   Although the weather was a mix of snow and rain, the sight of cruise ships back in port was a welcome sign to the tour operators in Juneau.

Roughly one million tourists will visit Juneau aboard cruise ships in 2013.  They will visit on one of the record 27 different cruise ships on the 10 different lines that are offering cruises to Alaska in 2013.

Princess Cruises and Holland America each have seven cruise ships stopping in a port in Alaska this season.  Norwegian Cruise Line and Celebrity have three ships while Royal Caribbean has two ships in their fleet going to Alaska this season.  Disney, Carnival, Silverseas, Oceana, and Regent Seven Seas all have one ship scheduled to visit the 49th state.

The Alaskan cruise season will run until the end of September when the lines re-position the ships to warmer climates.  The Juneau Convention and Visitors Bureau expects 2013 to bring in more visitors than last year since there will be more and larger ships scheduled to stop in the Port of Juneau.

Passengers enjoy Alaskan cruises for the amazing wildlife and the unbelievable scenery through the glaciers.  Some of the most popular tours to take while on an Alaskan cruise are whale watching cruises, glacier tours, helicopter tours, salmon fishing, and gold mining and panning adventures.

Ben Souza
Ben is a world traveler who has visited 40+ countries and taken over 70 cruises. His writings have appeared and been cited in various media outlets such as Yahoo News, MSN, NPR, Drudge Report, CNN, Fox, and ABC News. Ben currently resides in Cincinnati, Ohio. Follow Ben on Instagram. Visit Ben Souza on Linkedin. You may email Ben at [email protected]
Cruise NewsFirst Cruise Ships of 2013 Stop in Alaska
Previous article
Prices Drop on Carnival Cruises after Problems at Sea
Next article
Carnival Adds New One Way Cruises from New York to Puerto Rico