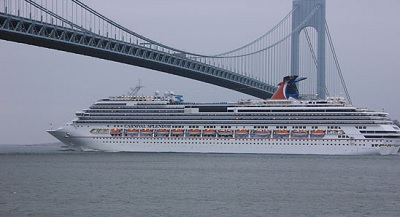 This itinerary on the Carnival Splendor will allow for stops at great ports like St Kitts, St Maarten, St Thomas,  and the islands of Antigua.  For those that want to cruise back to New York instead of flying they can also book cruises from Puerto Rico to New York and make it a 2 week vacation.

Currently Carnival’s 7 or 8-night round trip cruises that sail out of New York are only able to go as far south as Florida and the Bahamas because of the distance, so these one-way cruises will give New Yorkers grater variety in exploring the southern Caribbean.

The cruise line also announced that it would offer new 4, 5 and 7-day cruises on the Carnival Splendor to Canada and New England. The dates for these cruises will take place from June to October 2014.

What do you think about one-way cruises?  Would you take one and fly back or would you just book another one-way cruise to get back home?  Let us know in the comments section below.

J. Souza
Jon got hooked on cruising after his first cruise on his honeymoon, and today he is always looking for cruise deals and reading information about the cruise industry. Jon lives in the foothills of North Carolina and wishes there were a cruise port that far inland. Jon can be reached at [email protected]
Cruise NewsCarnival Adds New One Way Cruises from New York to Puerto Rico
Previous article
First Cruise Ships of 2013 Stop in Alaska
Next article
Viking River Cruises to Launch New Ocean Cruise Line in 2015