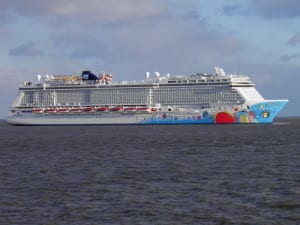 Norwegian Cruise Line’s newest cruise ship, the Norwegian Breakaway, successfully completely sea trials today.  During the sea trials, the ship’s speed, maneuverability, hydrodynamics, and propulsion were tested and the ship passed with flying colors.  The sea trials began on March 25 and the ship exceeded all nautical and technical requirements.

After a transatlantic cruise from Southampton, England, the Breakaway will be the largest cruise ship to call the Port of New York home.  The ship will begin sailing seven night cruises to Bermuda out of New York.  In the fall and winter, the ship will sail to the Bahamas and Florida.

The Breakaway will be the most innovative ship in Norwegian’s fleet.  The ship is one of the most, if not the most anticipated cruise ship that will debut in 2013.

Entertainment on board will include the show “Rock of Ages”, the dance sensation “Burn the Floor”, and Cirque Dreams & Dinner Jungle Fantasy.  Food Network’s own Geoffrey Zakaria will debut his first restaurant at sea.  The ship will even have a bake shop run by Cake Boss’s Geoffrey Zakaria.

The top deck of the Breakaway will have the largest ropes course on any cruise ship along with five waterslides that are part of the first aqua park at sea.  Passengers will also have the chance to “Walk the Plank”.  Part of the top deck is a three story sports complex that will include a basketball court, nine hole mini-golf course, and a rock climbing wall.

Each cruise will have a dazzling fireworks display, a first for Norwegian Cruise Line.  Disney is currently the only cruise line that offers a fireworks show on their cruise ships.

The Breakaway is the largest cruise ship ever built in Germany.  With the sea trials complete, on board operations team will continue to prepare the ship for a series of inaugural events the ship’s maiden voyage across the Atlantic.

Ben Souza
Ben is a world traveler who has visited 40+ countries and taken over 70 cruises. His writings have appeared and been cited in various media outlets such as Yahoo News, MSN, NPR, Drudge Report, CNN, Fox, and ABC News. Ben currently resides in Cincinnati, Ohio. Follow Ben on Instagram. Visit Ben Souza on Linkedin. You may email Ben at [email protected]
Cruise NewsNorwegian Breakaway Passes Sea Trials
Previous article
How to Choose a Cruise Line: Comparison of the Top 10 Cruise Lines
Next article
New Cruise Ships for 2013