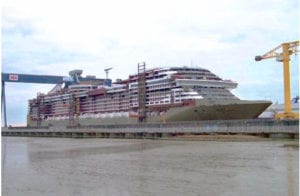 It took months of negotiating, but MSC has finally taken over the contract to purchase another huge 140,000 ton cruise ship for its Fantasia Class to go along with MSC Fantasia, MSC Splendida, and the MSC Divina.  The new ship will be named the MSC Preziosa (English for precious) and is expected to be completed in the spring of 2013.

This will be the 13th cruise ship for MSC, which is now the 4th largest cruise company in the world, with many cruises in the Mediteranean, Europe, and South Africa.  The company is also starting to offer more cruises to American cruisers with trips to the Bahamas and Caribbean.

The Preziosa will be sailing in the Mediterranean, which may be a mixed blessing to those still recovering from the Costa Concordia disaster that took place in the same region, but MSC’s new ship will be about 26,000 tons larger in capacity and will be able to carry an even larger number of crew and passengers.

Although MSC is glad to have another Fantasia Class ship in its lineup, the company did not original start building the vessel.  In the summer of 2010 the General National Maritime Transportation Company (GNMTC)  ordered the cruise ship as the first large cruise ship built for an Arab company.  But after political and economic unrest in Libya in 2011, the Libyan state company could no longer afford to fund the project, and now MSC is in the process of making some changes to the design of the ship.

Because the ship was going to be used by Libya, many are calling it the “ex-Gadaffi ship”.

The MSC Preziosa is to be a sister ship of the MSC Divina, which should start taking cruises in the summer of this year.

Some stats on the MSC Preziosa

MSC’s newest ship is about half complete, with 70% of the hull finished and all of the furnishings and fixings yet to be done.  This grand ship took an investment of 550 million euros ($724 million US dollars) and will offer 1,751 staterooms and 18 decks.  There will be 4 swimming pools (including an infinity pool), 4 main restaurants, 21 bars,  12 whirlpools, a bowling alley, sports area, fitness center, children’s area and even a private MSC Yacht Club with 69 guest suites, a solarium, hydro-massage pools, a skydome swimming pool, and stunning views.

This will be a state-of-the-art ship with all of the improvements MSC is adding to the ship that were not originally in the schematics when GNMTC was ordering the vessel.

MSC has expressed excitement over this new cruise ship and along with it the ability to offer sailings in all seas.

We will continue to offer updates on this new cruise ship as they develop.

J. Souza
Jon got hooked on cruising after his first cruise on his honeymoon, and today he is always looking for cruise deals and reading information about the cruise industry. Jon lives in the foothills of North Carolina and wishes there were a cruise port that far inland. Jon can be reached at [email protected]
Cruise NewsMSC Announces MSC Preziosa as New Cruise Ship to Its Fantasia Class
Previous article
Silver Shadow Cruise Ship Hits Cargo Ship in Vietnam
Next article
Costa Concordia Update: 5 More Bodies Found, Fuel Removed