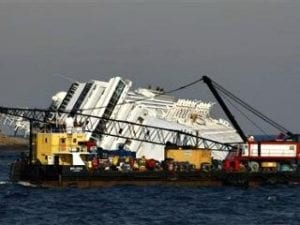 Divers searching the wreckage of the Costa Concordia cruise ship found 5 more bodies on Thursday, Italian officials said.  This brings the total number of bodies recovered from the January 13, 2012 disaster to 30.

Divers were unable to confirm the sex or identity of any of the 5 that were found.  The bodies were found on the exterior side of the ship facing the island of Giglio.  Officials expect the bodies to be brought to the mainland in the next 48 hours.

The 8 bodies that were discovered a few weeks ago are still waiting official identification.  The remains have become severely decomposed from being in the water close to 2 months.  Forensic authorities are using DNA sampling to try and identify the bodies.

There are still 4 more missing passengers and crew members from the nearly 4,200 that were on board the Concordia when it struck a reef off the coast of Italy.

The 5 week process of removing the 2,400 tons of fuel on the ship was completed this week eliminating the fears of an environmental problem if the fuel began to seep out of the ship.  The process used 20 platforms, transport ships, tankers, tugs, and crane barges.  Although all the fuel is removed, the seabed around the ship will be monitored for months as a precautionary measure.

Six companies have submitted bids for removing the damaged ship.  Costa Crociere is expected to choose one next month so the process of repairing the ship can begin.  Costa released the following statement, “The operation to remove the wreck will be a particularly complex one and is expected to take from 10 to 12 months, depending on which tender is chosen.”

Francesco Schettino, the captain of the Costa Concordia, remains under house arrest for alleged manslaughter, causing a shipwreck, and abandoning ship before all passengers and crew members were safely off the ship.

Cruise Fever will continue to bring you the latest updates as more information becomes available.