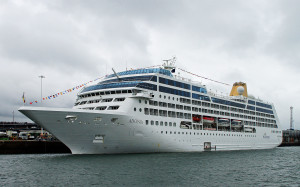 Two passengers on the P&O Adonia were shot in a daylight robbery on Sunday afternoon in Barbados.  The British married couple Philip and Ann Prior, aged 72 and 59, were hit while visiting the port of Bridgetown.

The injuries are not considered to be life threatening and both were admitted to the hospital where they are resting “comfortably”.  The husband was shot in his left side and the wife in her right thigh.  Other tourists in the area rushed by with towels and bandages to aid the Priors after the attack.

P&O issued the following statement, “”Two passengers on Adonia have been hospitalized at the Queen Elizabeth Hospital in Bridgetown, Barbados, following an incident on shore.  Local authorities are investigating. Our shoreside customer care team and ship’s medical team are providing support as necessary.”

A spokesman for the Royal Barbados Police said that the attacker stole the woman’s purse and fled.  The couple was believed to be on their way back to the cruise ship when the robbery took place.

The news hit hard with the tourism authority in Barbados.  Incidents like this are extremely rare and they continue to focus on the safety and security of tourists.

The P&O Adonia is near the end of an 85 night world cruise which disembarks on April 3.  The cruise departed from Southhampton on January 8, 2013.  The Adonia is a smaller 30,000 gross ton ship that can carry up to 826 passengers.

Cruise Fever will continue to monitor this incident and update this page if any more information becomes available.