Stunning Video of the World’s Largest Cruise Ship, Harmony of the Seas

Royal Caribbean’s Harmony of the Seas, the largest cruise ship ever built, recently completed the first round of sea trials testing the ship’s propulsion and maneuverability. A few days ago, we posted a video released by the shipyard showing the inside and outside of the ship under construction.

While the ship was out at sea, stunning new footage was captured of the vessel as seen in the video above. From the video, we get the first glimpse of many parts of the ship that we have to see.  This helicopter footage shows overhead views of the half completed water slides (Perfect Storm), Central Park, Boardwalk, and Solarium.  One interesting feature that has yet to be added to the ship is the Ultimate Abyss, a 10 story slide that is being added to the aft of the ship.

Search Cruises on Harmony of the Seas

Harmony of the Seas is the 3rd Oasis class ship from Royal Caribbean and is the largest cruise ship ever built at more than 225,000 gross tons.  For comparison sake, RMS Titanic was an estimated 45,000 gross tons. The ship can carry 6,000 passengers and will homeport in Ft. Lauderdale, Florida after a season in Europe. Harmony of the Seas will make her debut in less than 70 days.

Cruise Fever will have all updates on Harmony of the Seas as the ship nears completion and is delivered to Royal Caribbean. 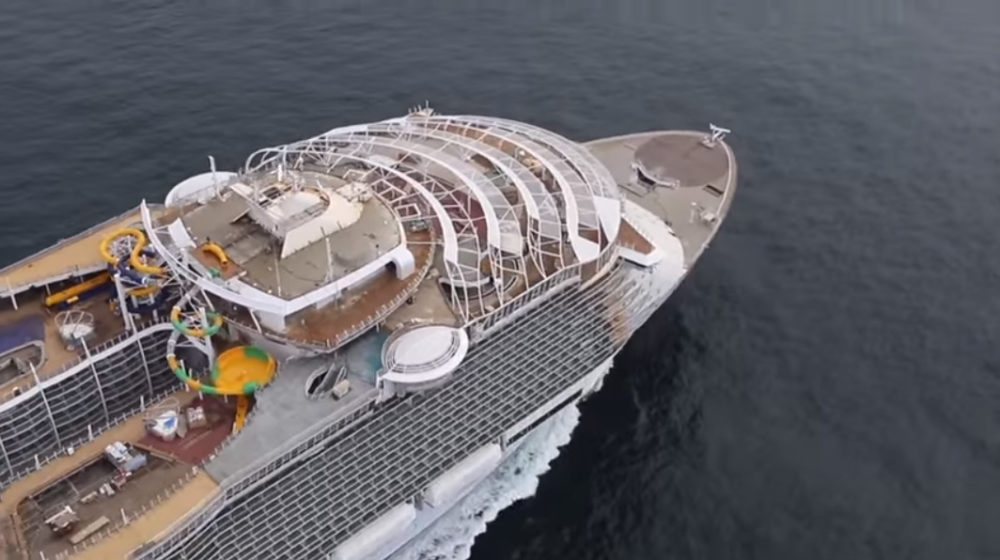