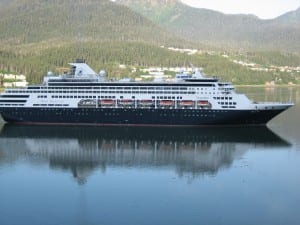 A norovirus outbreak has been confirmed on the Holland America ms Veendam.  A total of 124 passengers and crew members on the cruise ship have reported ill during the 14 night sailing.

Of the 124 that had norovirus type symptoms, 114 (9%) of them were passengers.  It is currently unknown what caused the norovirus on this sailing.  Passengers bringing the sickness onboard and contaminated food have been blamed for past outbreaks.

Holland America gave the cruise ship an extensive cleaning and disinfection and made announcements to the passengers onboard notifying them of the outbreak and to encourage hand hygiene.  They also collected specimens from the ill passengers and crew members that will be sent to the CDC lab for testing.

When the ship arrived in Ft. Lauderdale on February 22, an additional cleaning crew was sent onboard to conduct a thorough super-sanitation to clean and disinfect the ship.  The terminal was also sanitized to keep the virus was spreading.

When passengers catch the norovirus, they are confined to their staterooms to keep the sickness from spreading.  The symptoms usually last between 24-72 hours.

Symptoms of the norovirus are vomiting and diarrhea and it is easily spread on cruise ships where many people are confined to tight spaces.  Other places where the norovirus is often spread is in school rooms, hospitals, and dorm rooms.

The ms Veendam was on a 14 night cruise out of San Diego, California.  The cruise ship had stops in the ports of Puerto Vallarta, Mexico; Huatulco, Mexico; Puerto Chiapas, Mexico; Puerto Caldera, Costa Rica; and Cartagena, Columbia.  This one way cruise passed through the Panama Canal before reaching its final destination in Ft. Lauderdale, Florida.

This is the fourth confirmed norovirus outbreak on a cruise ship in 2014.  Earlier, the Norwegian Star, Royal Caribbean Explorer of the Seas, and Caribbean Princess all had confirmed outbreaks.  Cruise lines are required to notify the CDC if more than 2% of the crew and passengers become ill.  It is officially labeled as an outbreak if the total number of cases crosses the 3% mark.

Cruise Fever reached out to Holland America and received the following response:

During the 14-day February 8, 2014, Panama Canal cruise aboard ms Veendam, a number of guests reported to the infirmary with a common type of gastrointestinal illness. These guests were asked to remain in their staterooms until their symptoms disappeared. Additional procedures, developed closely with the United States Centers for Disease Control (CDC), have been in place to help prevent further cases.

Holland America Line works diligently to try and ensure that all onboard cooperate with established processes to help safeguard the health of others. This includes strict reporting requirements for crew, on-going communications with guests explaining the protocols and instructions to wash hands frequently.

Prior to guests boarding yesterday for the next cruise, the ship underwent a thorough sanitization. The ship sailed at approximately 6:15 p.m. on its next sailing, a 15-day Panama Canal cruise to San Diego.