Viking’s newest cruise ship for the Nile River, Viking Osiris, completed a construction milestone this week when the vessel was floated out of dry dock for the first time.

The 82 passenger ship, built specifically for the Nile River, will debut in August and sail 12 day cruises.  Viking’s Pharaoh’s & Pyramids itinerary is one of the cruise line’s best selling cruises.

The arrival of Viking Osiris later this year coincides with several key events in Egypt in 2022, including the highly anticipated opening of the new Grand Egyptian Museum outside Cairo on the Giza Plateau—as well as the 100th anniversary of the discovery of King Tutankhamen’s tomb by Howard Carter and his benefactor, the 5th Earl of Carnarvon.

Building on the cruise line’s longstanding relationship with the Carnarvon family, guests who sail on board Viking Osiris will experience Privileged Access to memories from 1922 and the events surrounding the discovery of King Tutankhamen’s tomb.

“Our guests are curious explorers, and just as the iconic explorers before them, they choose Egypt as a destination because of its unparalleled access to history and antiquities. This rings as true today as it did a century ago and is what we continue to hear from the guests who are currently sailing with us on the Nile, as well as the many we have hosted in the last year,” said Torstein Hagen, Chairman of Viking. “We are proud to be the only western company to build, own and operate ships on the Nile—and we will always maintain our commitment to creating meaningful experiences that are focused on the destination. Particularly during this milestone year for Egypt, we look forward to welcoming guests on board Viking Osiris and introducing them to the country’s many cultural treasures.”

Viking Osiris will have 41 staterooms inspired by Viking’s award-winning river and ocean ships with the elegant Scandinavian design for which the cruise line is known.

During the 12-day, Pharaohs & Pyramids itinerary, guests begin with a three-night stay at a first-class hotel in Cairo, where they can visit iconic sites such as the Great Pyramids of Giza, the necropolis of Sakkara, the Mosque of Muhammad Ali, or beginning in late 2022, the new Grand Egyptian Museum.

Guests then fly to Luxor, where they visit the Temples of Luxor and Karnak before boarding a Viking river ship for an eight-day roundtrip cruise on the Nile River, featuring Privileged Access to the tomb of Nefertari in the Valley of the Queens and the tomb of Tutankhamen in the Valley of the Kings, and excursions to the Temple of Khnum in Esna, the Dendera Temple complex in Qena, the temples at Abu Simbel and the High Dam in Aswan, and a visit to a colorful Nubian village, where guests can experience a traditional elementary school. Finally, the journey concludes with a flight back to Cairo for a final night in the ancient city.

Ben Souza
Ben is a world traveler who has visited 42 countries and taken over 50 cruises. His writings have appeared and been cited in various media outlets such as Yahoo News, MSN, NPR, Drudge Report, CNN, Fox, and ABC News. Ben currently resides in Cincinnati, Ohio. Follow Ben on Instagram. Visit Ben Souza on Linkedin. You may email Ben at [email protected]
Cruise News Viking Cruises Viking's Newest Ship for the Nile River Touches Water for the First...
Previous articleRoyal Caribbean Takes Delivery of the World’s Largest Cruise Ship
Next articleBest Ways to Book Cruises, How to Save Money and Time

Viking is christening eight new Longships this week including four that were specifically built to cruise on the Seine River in France. Viking has...
Read more
Viking Cruises

Viking's new cruise ship for the Mississippi River, Viking Mississippi, completed a construction milestone this week when the vessel touched water for the first...
Read more 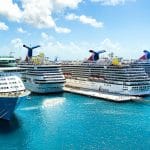