Majestic Princess was originally built for the Chinese cruise market and because of that, the cruise ship has some unique locations that are not found on the vessel’s three sister ships.

This was my first full Alaska sailing, I had only done a partial Alaskan cruise back in 2015 on Ruby Princess. Here is my review of the cruise on Majestic Princess and everything that I loved about it.  You can read my first impressions of the cruise that I wrote while on board here.

Embarkation – I went from curb to ship in under 30 minutes since I already had my OceanMedallion. Although we were not tested for COVID-19 before boarding the ship, everyone had to show a negative results from a test that was taken within the past three days.  Of out the five cruises I’ve been on this summer, this was the easiest and quickest embarkation.

Cruise Ship – Majestic Princess is the ultimate Princess ship to take an Alaskan cruise.  Since the ship was built for the Chinese market, there are more enclosed spaces than the other Royal class ships.  With the weather in Alaska often cool and rainy, more indoor spaces make it easier to enjoy the views while not standing out in the elements.

It’s rained pretty much every single day of our cruise (it is Alaska after all) so having these extra indoor spots is really nice.

Cabin A426 Mini-Suite – I stayed in cabin A426, a mini-suite on deck 12. The cabin has a full couch, a decent size balcony, and a full bathroom. By full bathroom, I mean it has a shower, tub, and sink.  It was so nice being able to take a shower with extra elbow room. 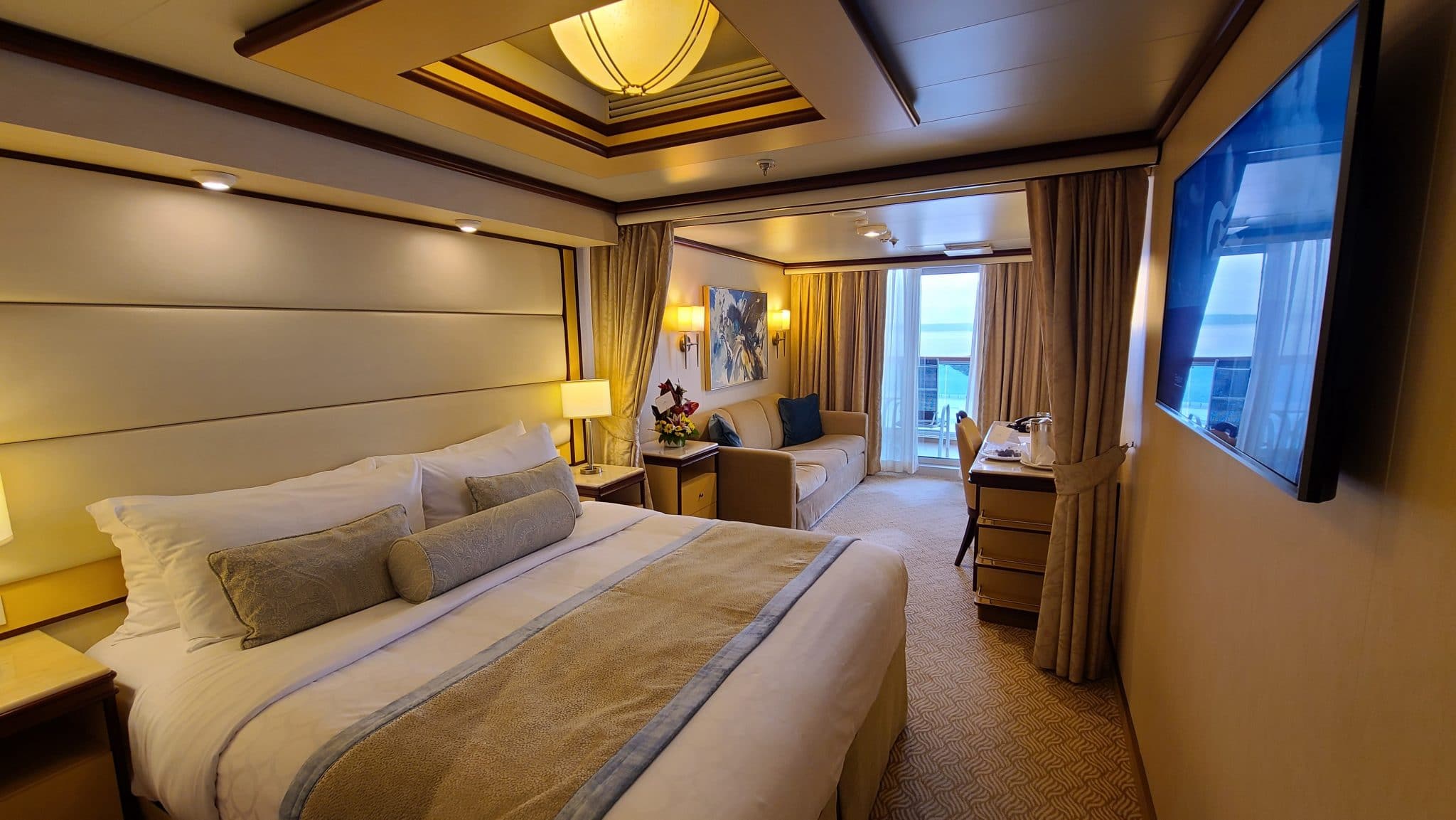 After staying in many small cruise ship cabins in my life, it was really nice to have extra space that the mini-suite offers.

OceanMedallion – Princess Cruises’ OceanMedallion is one of the best, if not the best new feature to be added recently to the cruise industry.  You receive your OceanMedallion before your cruise and it makes check-in a breeze since you already have your “cruise card”.

I love how the door to your cabin automatically unlocks when you get within 10 feet of your stateroom. You can also use it to track the members of your traveling party or any friends you are traveling with and see exactly where they are on the ship.  By default, no one outside of your cabin can see where you are unless you approve of each person.  For those under the age of 18, parents will always be able to see where their kids are all at times.

The OceanMedallion replaces your keycard and greatly enhances the cruise experience. You can carry it with you in different ways. You can wear like a watch, on a landyard, part of a necklace, or as a clip. Or, you can just carry it in your pocket, it’s all up you.

Animal Planet Recommended Excursions – Princess Cruises has a partnership with Animal Planet and I took two of their recommended shore excursions on the cruise. Alaska is the prefect cruise destination to view wildlife and I was able to view whales, bald eagles, and black bears up close in the wild.

The first excursion I took was in Juneau on one of Princess Cruises’ “Local Connections”, designed to connect you with locals in Alaska.  It was “Whale Watching & Mendenhall Glacier Photo Safari Designed by Alaskan Photographer”. It was also one of the Animal Planet excursions and it did not disappoint.

Our small tour group of 14 took a short bus ride where we boarded a small boat to see whales. I’ve been on whale watching tours before and sometimes it can be a challenge to find the whales at first. Not on this trip!  We went out and instantly saw whales.  After about 10 minutes of seeing whales, we were treated to a double breach when two whales simultaneously leaped out of the water just a few yards away from our boat.

Here are two photos that I captured with my phone:

Whales putting on a show on the first excursion on our cruise on Majestic @PrincessCruises. #Sponsored #PrincessCruises pic.twitter.com/wh28HmoMH9

After viewing whales for a bit, we cruised around a small island that was covered with sea lions and even a few Bald Eagles. The second half of the excursion had us hiking through the Alaskan woods until we came upon Mendenhall Glacier. It was one of the most enjoyable excursions that I’ve taken on a cruise.

In Skagway, I took the White Pass Scenic Rail, a fun train ride up the mountain as you travel on the tracks built during the 1898 Klondike Gold Rush. 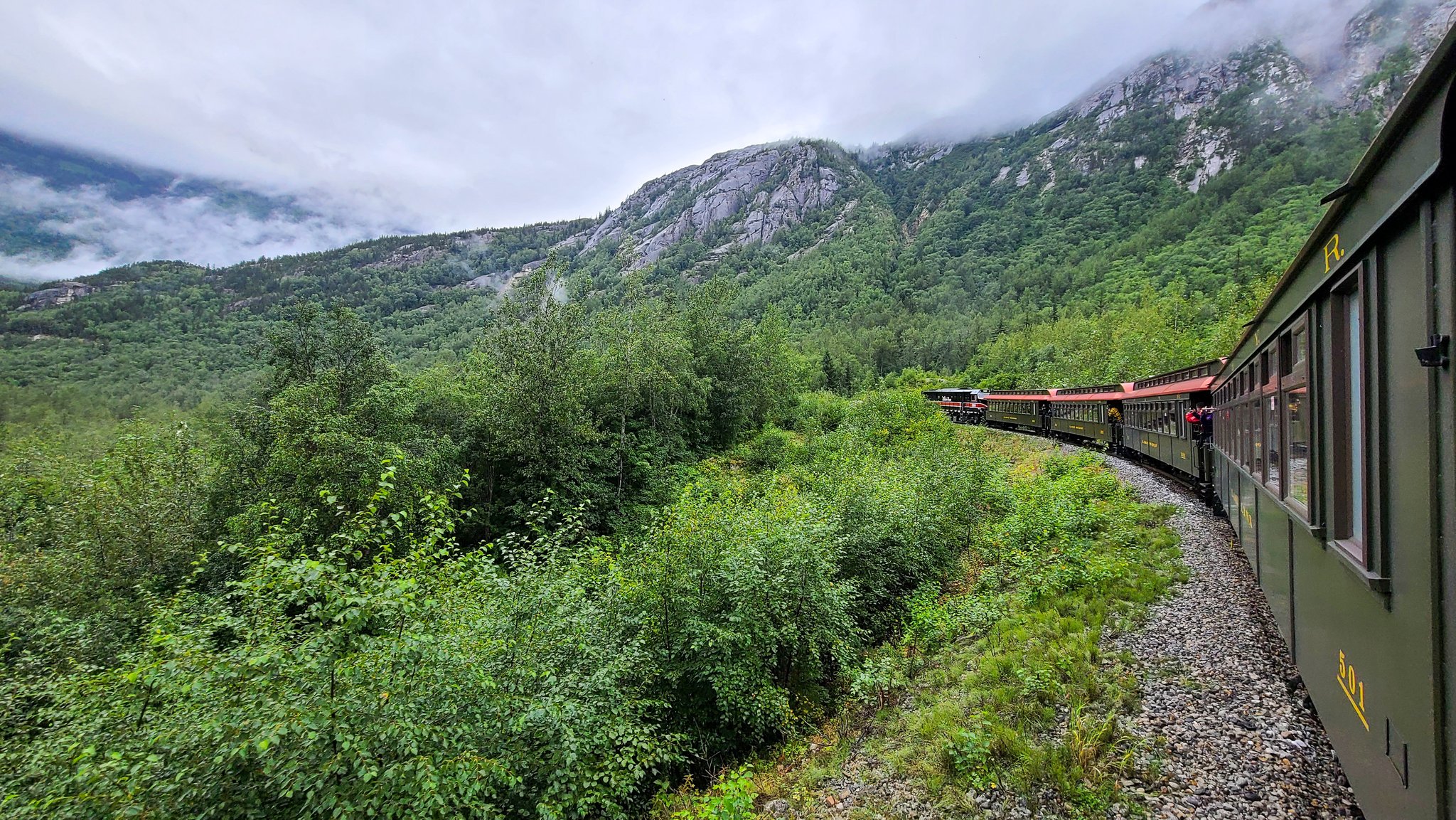 In Ketchikan I took a second Animal Planet exclusive excursion, a Black Bear, Wildlife and Nature Walk. We were able to see several bears in the wild as well as watching them catch and eat salmon. What a great experience!

We went on a hike to see black bears, an @AnimalPlanet exclusive tour with @PrincessCruises. We watched bears catch and eat salmon, saw 7 bears total including 5 cubs. #Sponsored #Alaska pic.twitter.com/ZFoXh6PkVz

The highlight of the trip was our day in Glacier Bay.  Glacier Bay needs to be on everyone’s must see list. Combine it with the Ultimate Balcony Breakfast and it’s pretty much the perfect morning on a cruise ship. It just doesn’t get any better than this.

Today we are visiting Glacier Bay on our cruise on Majestic @PrincessCruises, we’re blown away by the beauty of Alaska. #Sponsored #PrincessCruises pic.twitter.com/neFdoj0eQn

We spent several hours visiting and passing different glaciers in Glacier Bay. It was just stunning and the most scenic “sea day” I’ve ever had.

Doors to the Casino – This is a change on cruise ships that we are seeing more and more.  The casino now has glass doors on both ends that help keep the smoke from pouring into other parts of the ship.  Thank you Princess!

Alfredo’s – Alfredo’s is an Italian restaurant located in the ship’s Piazza and is complimentary.  One of the crew members told me that it was the most popular place to eat on board and I believe it. I think I ate there four times during the cruise and I just love their pizza, it’s so good.  They also have appetizers, calzones, desserts etc.

Crown Grill – Crown Grill is my favorite steakhouse at sea and comes with a $29 surcharge per person. I ate there on the second to last night of the cruise and the filet mignon was as fabulous as ever.

There are two other specialty restaurants on Majestic Princess, Harmony, an Asian restaurant, and Bistro Su La Mer serving up French cuisine. I dined at each one during the cruise and both were just delicious.

Buffet – While I only ate at the World Fresh Marketplace (buffet) a few times, I love how quickly they come by to offer you something to drink right after you sit down.  Sometimes I had barely sat down and they were asking what I wanted to drink, they were really on top of it.

Disembarkation – Since I had an 11:00am flight out of Seattle, I chose self-disembark to make sure I had plenty of time to catch my flight. I went from inside my cabin on the ship to through security at the airport in one hour and 15 minutes. I do have CLEAR so I can cut to the front of the security line at airports that have it.

If you want to take a Lyft or Uber from Pier 91 in Seattle, you have to take a short shuttle bus ride to the rideshare parking lot.

Random Thoughts on the Cruise

The crew was as amazing as they have been on my previous five Princess Cruises. My room steward Adrian did a fantastic job and everywhere I went on the ship I was always greeted with a smile and a friendly hello.

I thought there was a good mix of entertainment in the main theater.  There was everything from comedy to production shows to magicians to a soprano singer.  There really was a little something for everyone.

Princess still offered Movies by the Stars up on the pool deck with their giant TV screen. Unfortunately, the weather in Alaska wasn’t that great to sit outside to watch a movie at night.

There seemed to be more shops on Majestic Princess than on other three ships of the same class.

The Swirls Ice Cream Bar was open each day of the cruise on the pool deck. And since we were in Alaska, there was hardly any line.

Majestic Princess will spend at least the next two summers sailing to Alaska and it’s a great option if you’re looking to take a cruise to the 49th State.