Last night, MSC Seaside, the ship that follows the sun, was named in a glittering ceremony by international screen legend and Godmother for all MSC Cruises’ ships, Sophia Loren. 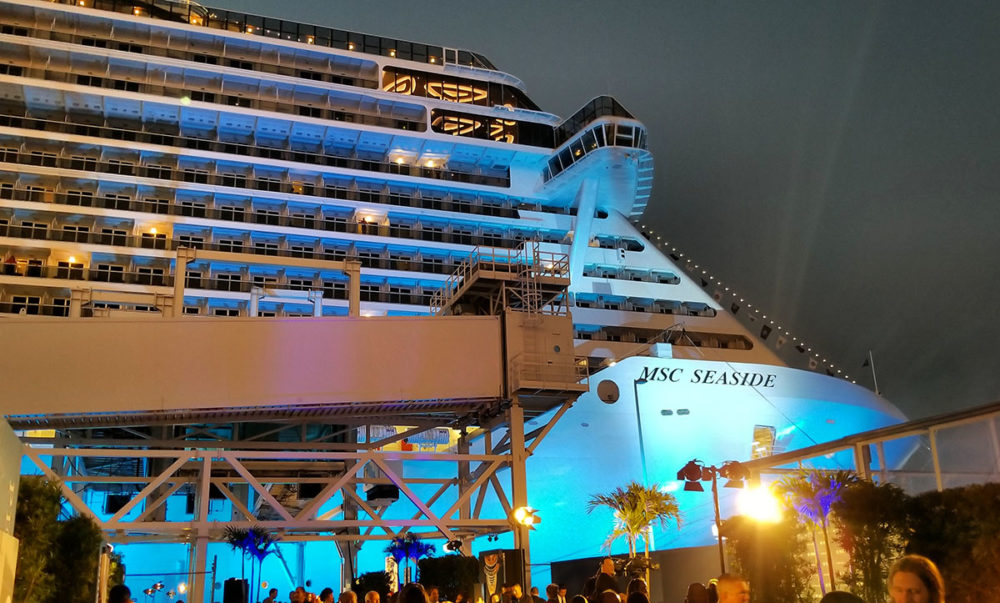 MSC Seaside, already recognized as one of the more innovative cruise ships in the industry, is the second ship to be launched in the past six months by the leading European cruise line as part of its industry-unprecedented 12 new mega-ships that MSC Cruises, the Switzerland-founded and -based world’s largest privately owned cruise line, will bring into service between 2017 and 2026.

To celebrate the coming into service of MSC Seaside, the Swiss-based global cruise line hosted a high-profile event in PortMiami and paid homage to traditional seafaring customs. Guests in attendance included guests from around the globe, including authorities and key partners from the travel industry, as well as US and global media alongside guests from closer to home.

Headlining the entertainment for the evening’s Naming Ceremony was multiple GRAMMY and LATIN GRAMMY winner, Ricky Martin, who is well-known for his high-energy and thrilling performances that have captivated millions of people throughout the world. Beloved by fans worldwide for his instinctive understanding of rhythm, passion for performing, and equal compassion for giving, Ricky Martin truly encompasses the international spirit of MSC Cruises and the city of Miami.

Making a guest appearance at the event was Miami football legend and Hall of Fame quarterback, Dan Marino, who was with the Miami Dolphins for 17 years. Earlier this year, MSC Cruises signed a partnership with the Miami Dolphins and became the official cruise line for the team, further strengthening the cruise line’s relationship with the South Florida community – where its US operations are based. Fans and guests will have the chance to experience the Miami Dolphins at sea and meet team alumni on a themed cruise on MSC Seaside in 2018. Marino presented MSC Cruises USA President Roberto Fusaro with a signed football helmet to be displayed on board as a symbol of the partnership.

The finale of the evening’s events was the time-honored tradition of breaking a bottle of champagne over the bow of the ship as MSC Seaside was officially named aloud. As a company with a strong maritime heritage dating over 300 years, observing these seafaring traditions is important to MSC Cruises and bringing good luck to this new ship tonight, as always, was Sophia Loren as Godmother to her 12th MSC Cruises ship. As one of the most celebrated Italian actresses of our time, the glamorous screen-legend is practically part of the MSC Cruises family.

MSC Cruises also announced two new partnerships specifically for MSC Seaside and relevant for the North American market. The first is with the Andrea Bocelli Foundation (ABF), where MSC Cruises’ guest donations will support ABF’s valuable work in Haiti, one of the poorest countries in the world currently facing exceptional challenges.

Every dollar donated on board by a guest will go directly to the Foundation to make a real difference, establishing schools that become community centers and launching projects such as the Mobile Clinic, providing health care assistance and prevention, clean water, lighting and agricultural development, transforming the lives of their communities.

To mark the launch of the partnership with ABF, the world-famous tenor Andrea Bocelli took to the stage during the naming ceremony with 30 children from the Voices of Haiti, a talented choir of Haitian school students aged between 6 and 14 that brings music into the schools of the ABF and St. Luke Foundation for Haiti.

In collaboration with the Andrea Bocelli Foundation, the project aims to reach over 2,550 children in five communities in Haiti.

MSC Cruises also announced a new partnership with Joe Bastianich, the award-winning restaurateur, author, and TV personality with thirty successful restaurants worldwide – including Babbo and Del Posto in New York, and Carnevino in Las Vegas. Bastianich will become the newest addition to the impressive line-up of internationally renowned chefs and restaurateurs partnering with MSC Cruises across its global fleet, and will create a signature dish exclusively for MSC Seaside that will feature on the Elegant Night menu.

High quality, international dining is one of the key highlights of the MSC Cruises offering for guests and MSC Seaside takes this to the next level with six specialty restaurants featuring concepts from around the globe. One of these is a brand new dining experience from pan-Asian chef and international culinary pioneer, Roy Yamaguchi, with whom MSC Cruises has partnered to create a new Asian-Fusion dining concept, Asian Market Kitchen.