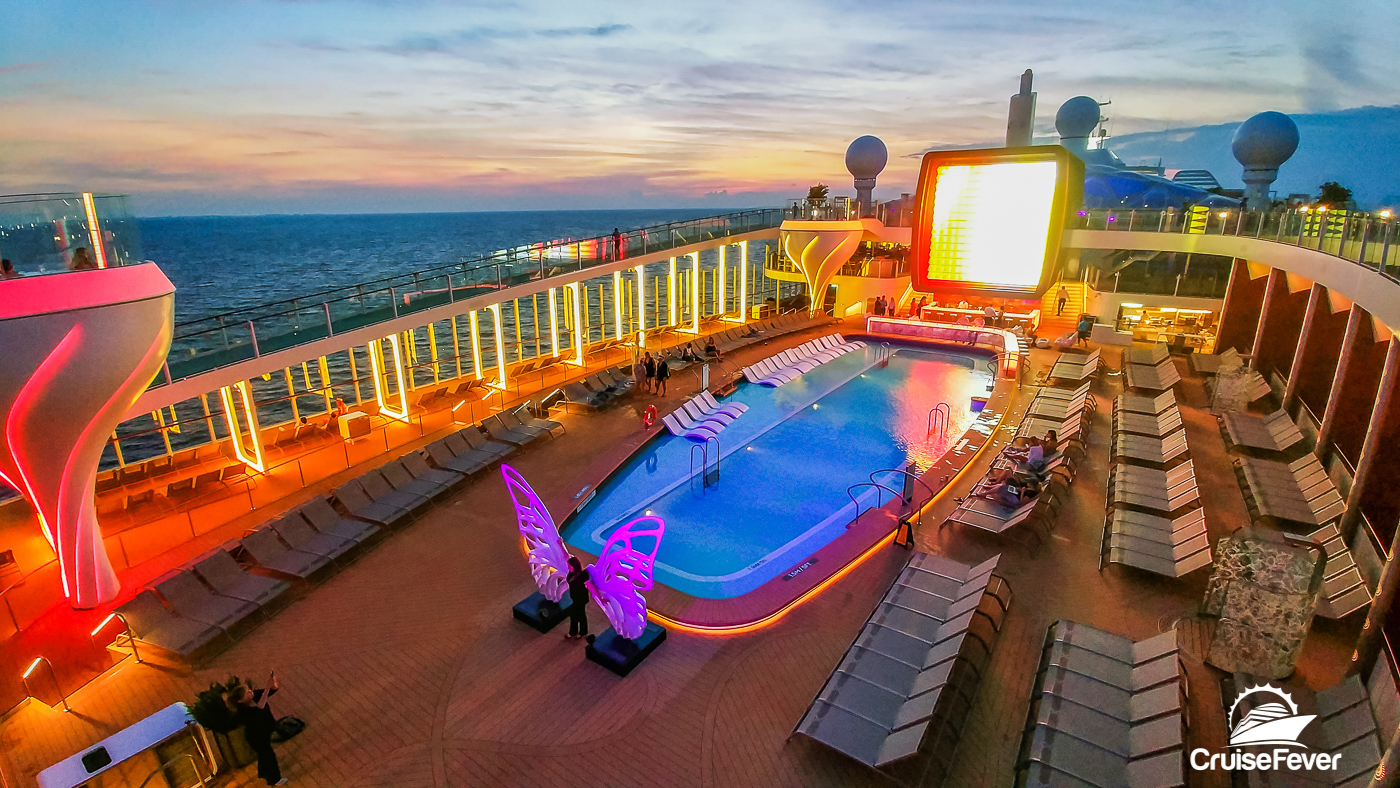 I haven’t been this wowed by a new cruise ship since Viking Ocean and Quantum of the Seas debuted several years ago. Celebrity Edge is unlike any other cruise ship at sea. The ship brings new original concepts that aren’t “stolen” from other cruise ships. 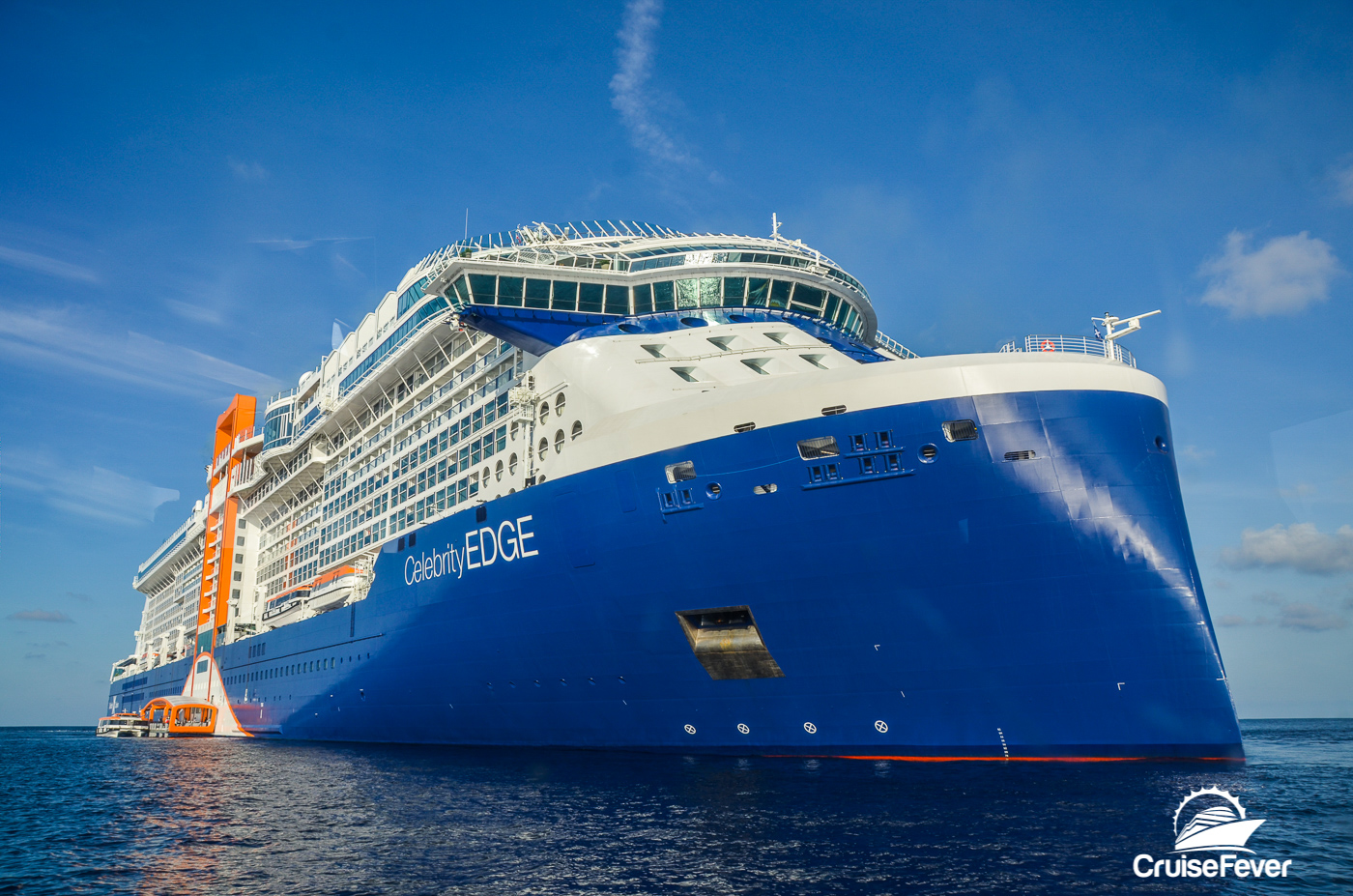 It’s almost as if there are two different Celebrity Edge cruise ships. There’s the day version and then at night, many of the public spaces transform into completely new venues. From Eden to the Rooftop Garden, I loved walking around the ship at night seeing how these spaces transformed from the day. 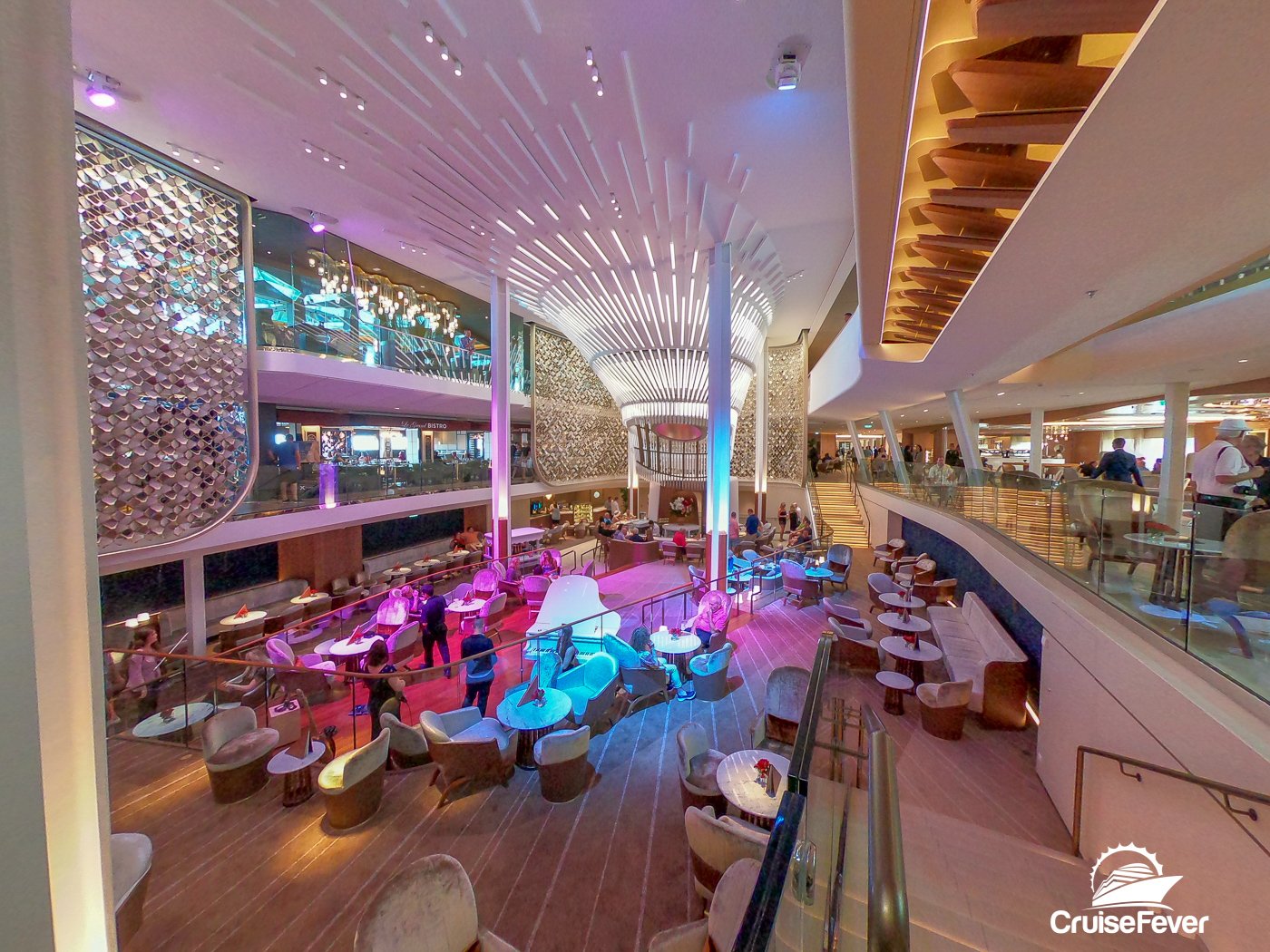 We stayed in a stateroom that is brand new to the cruise industry, Celebrity’s Infinite Veranda.  I’m not sure why cruise lines have not done this sooner.  The balcony is part of the cabin giving you more room to enjoy your stateroom  With floor to ceiling windows, the cabin felt extra spacious and tons of natural light coming in.

You can take a short video tour of the Infinite Veranda below:

There was a control on the wall to open the window and to close a shade if you wish to have privacy. There were also glass doors you could close to separate the balcony from the cabin. It’s by far my favorite balcony cabin I’ve ever stayed in. You could also control the stateroom lights and thermostat from your smartphone using the Celebrity app.  How cool is that? 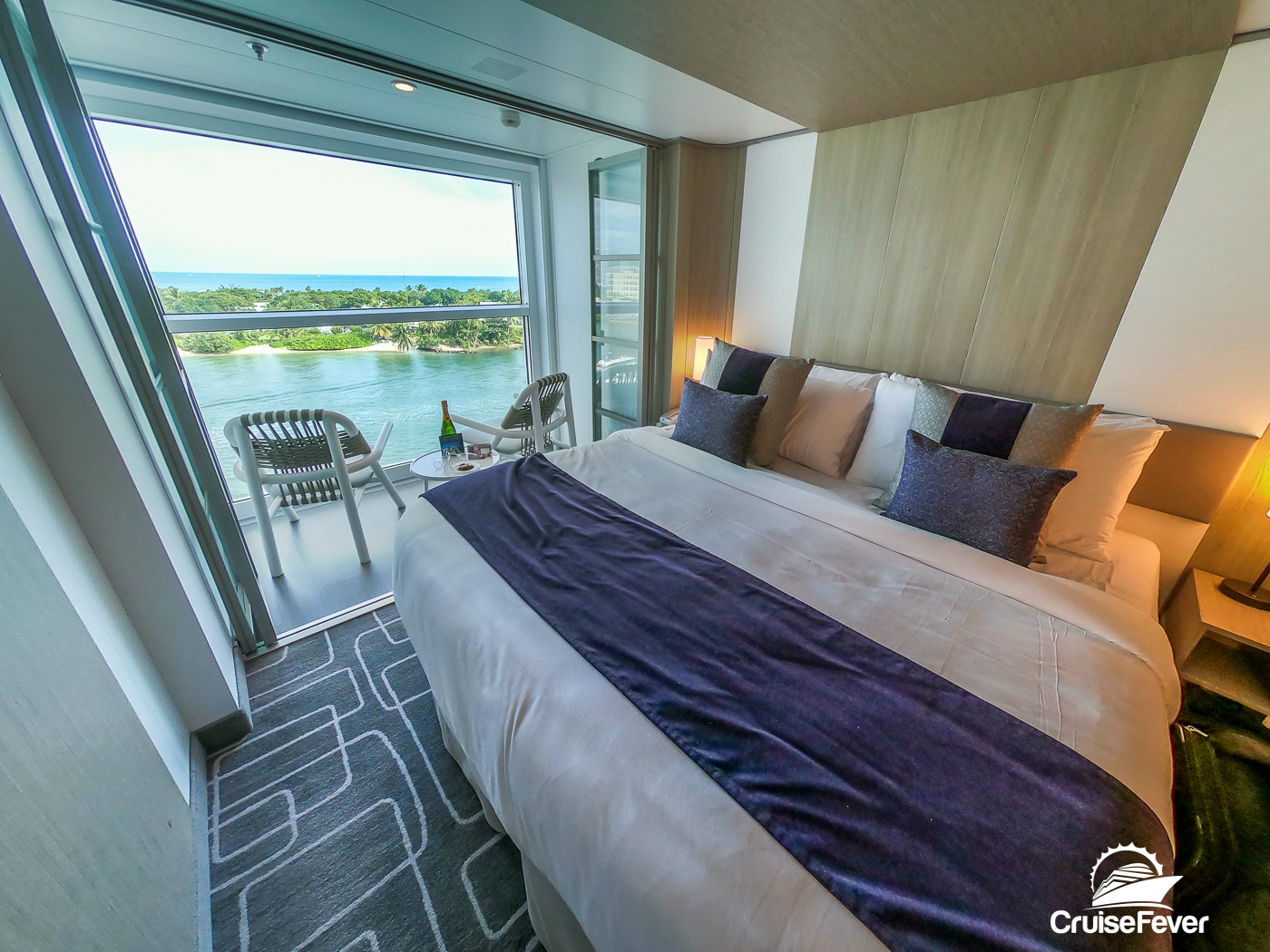 The bathroom was huge (for a cruise ship) with an extra large shower with incredible water pressure.  First impressions of the Infinite Veranda staterooms, blown away!

Tendering will never be the same on a cruise.  During the two day cruise, we tested out the new tendering process while off the coast of Nassau, Bahamas.  While tendering is pretty much a drag on every cruise, Celebrity Cruises turned what people hate into an enjoyable experience. 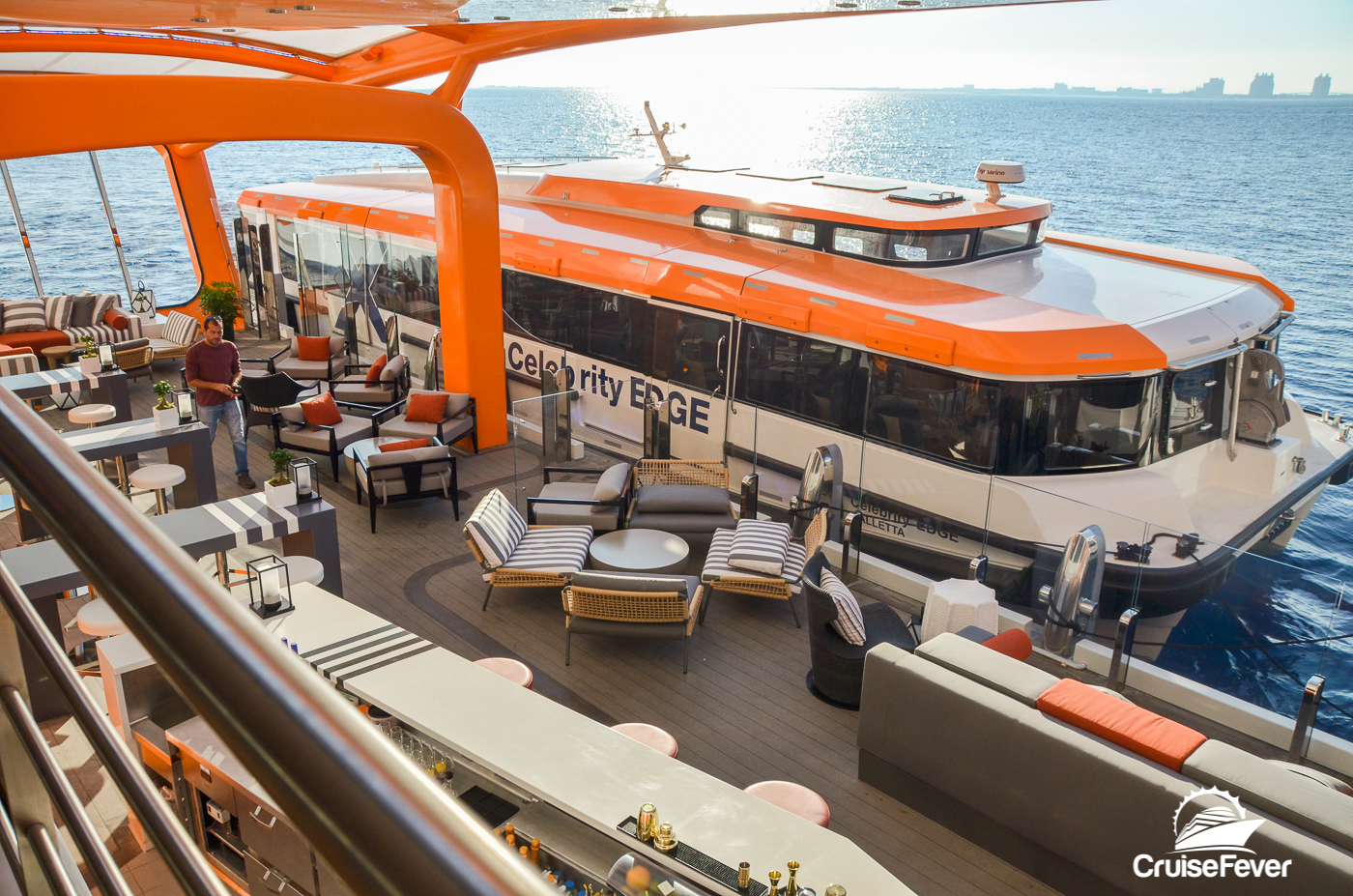 From the large open lounge area on the ship before you board the tender, the Magic Carpet serves as the gateway from the ship to the tender.  First thing I noticed about the tenders, they have a separate seat for everyone and they are comfortable.   I mean, really comfortable. They are night and day from the tenders on every other cruise ship where they pack you in like sardines with no regard for comfort.

During the day, Magic Carpet serves as a lounge and a specialty restaurant at night.  I remember when the cruise line first released renderings of this new feature my first thought was, “What the heck is this ugly orange thing on the side of the ship?”.  After spending two days on Celebrity Edge, I completely love it. It’s groundbreaking yet practical.  It’s going to be a massive hit with cruisers.

We will have a separate article about Magic Carpet and this tendering process later this week on Cruise Fever.

One of my favorite new trends in cruising are specialty restaurants located around the ship’s atrium. Celebrity Edge doesn’t disappoint with three of them right there in the center of ship.  My favorite is Le Petit Chef at Le Grand Bistro where your dinner table comes to life with animation from overhead projectors.  I was able to dine here the first evening of the cruise and it was awesome.  It was unlike any other dinner I’ve ever had on a cruise. 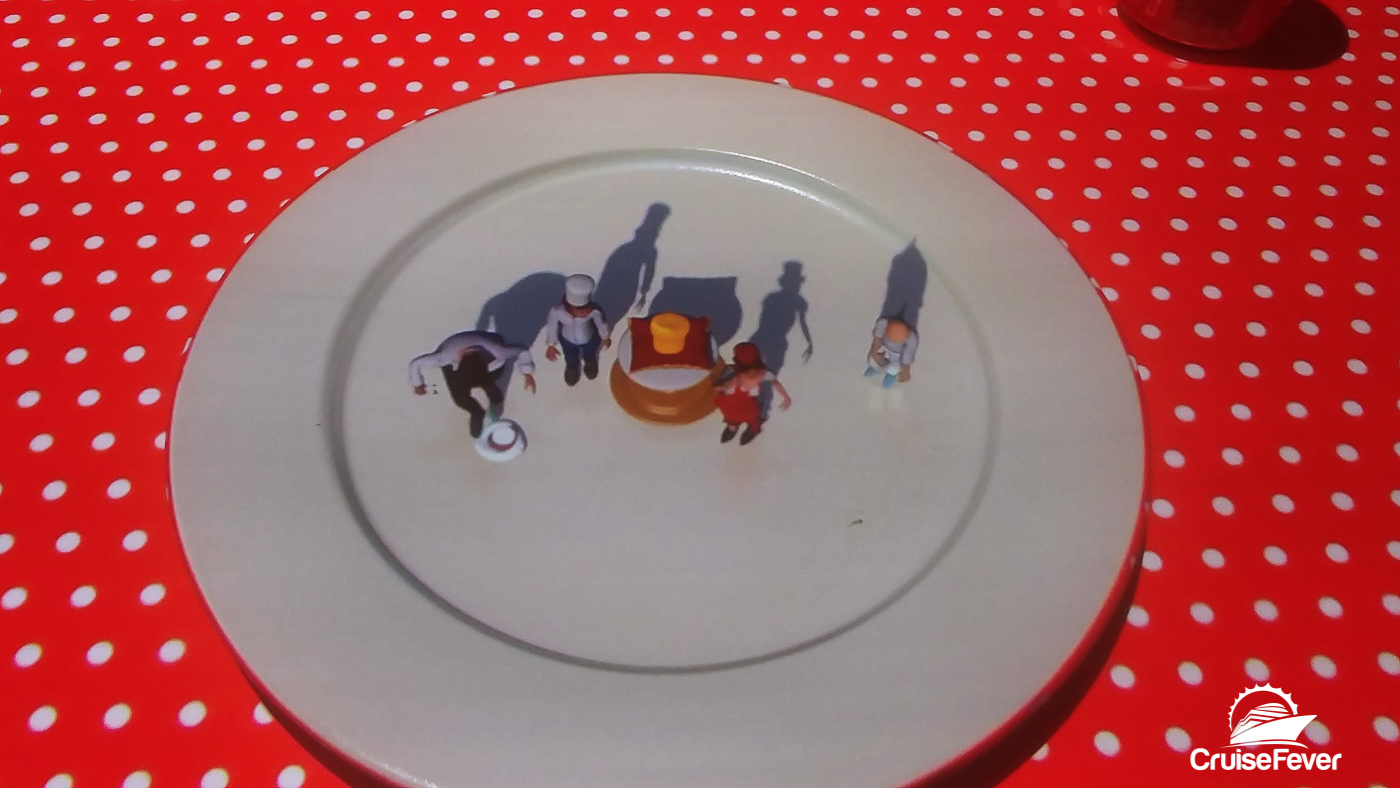 There are food options everywhere on the ship. There are 29 different places where you can either get food or something drink around the cruise ship.

I’m not normally a fan of buffets on cruise ships but Celebrity Edge is different.  It has a two story ceiling with large windows giving the area an open and roomy feel. 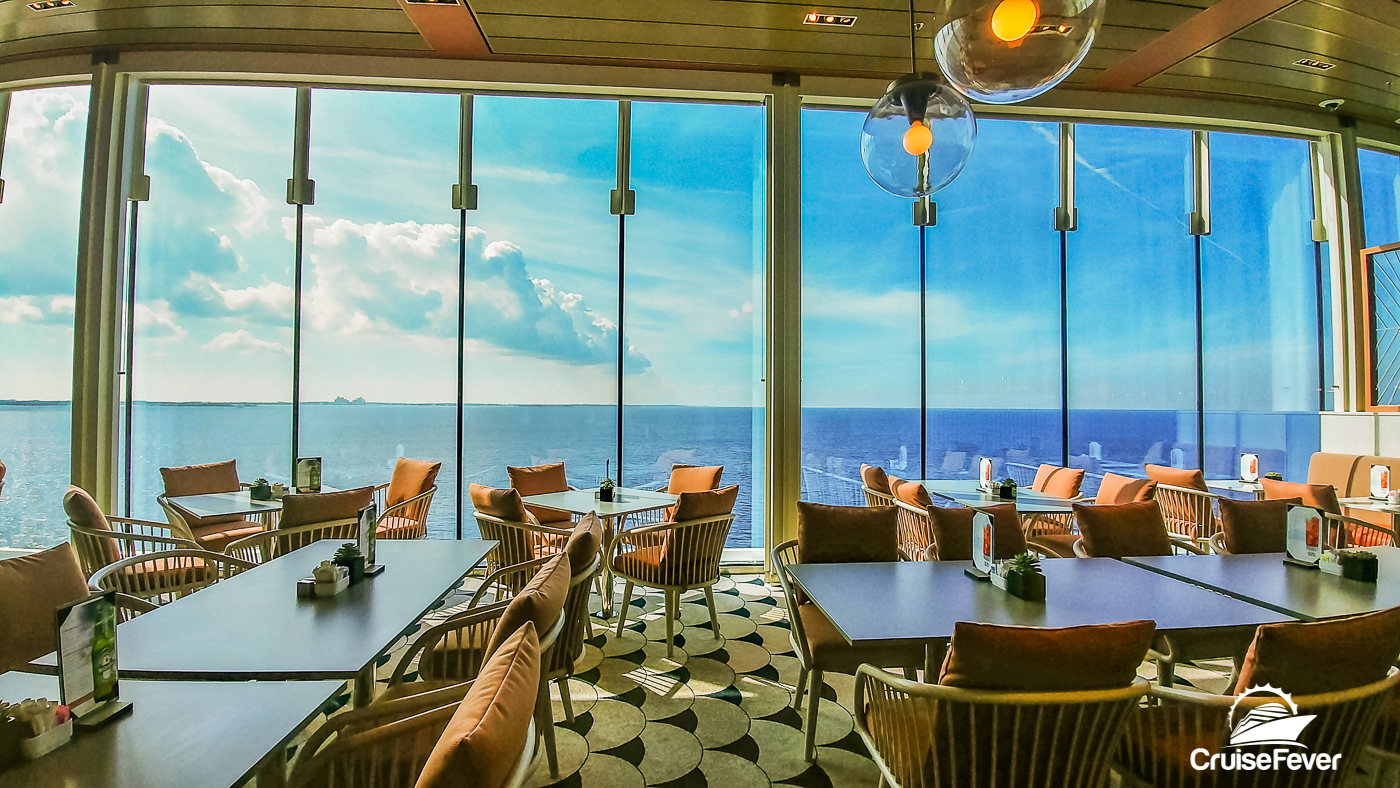 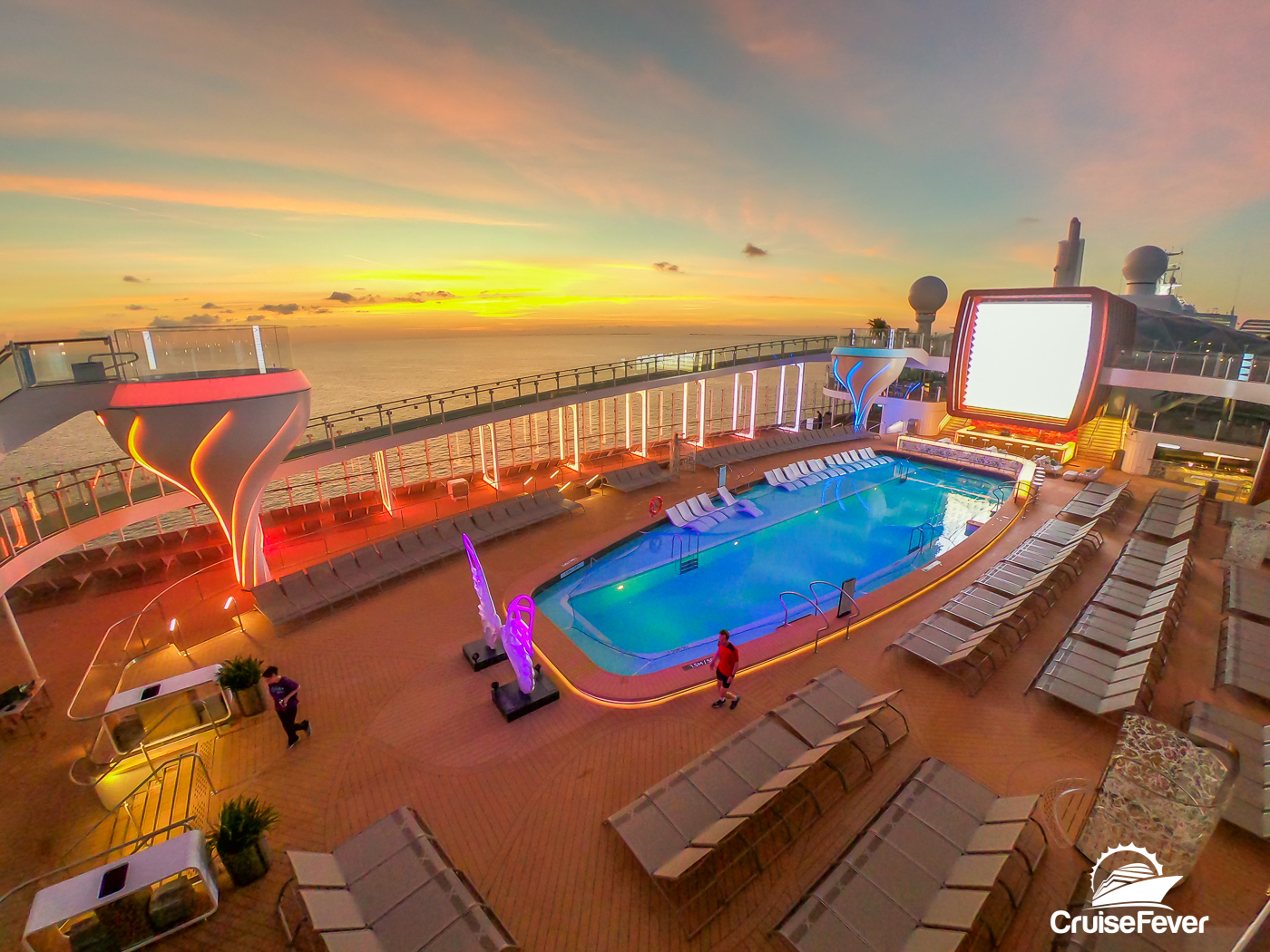 While the pool deck only has one pool, it is the longest pool ever built on a cruise ship. There are two giant champagne glass hot tubs that over look the pool deck area.  At night, this area lights up and it the most gorgeous pool area I’ve ever seen at night.

One nice addition are cabanas on one side of the pool that you can rent out of the day.  They include comfortable seating and a selection of drinks.

Eden is another one of those places on the ship that transforms at night. I don’t want to give away any secrets of this area, it’s something you have to experience for yourself.  It was a lot different than I was expecting. It’s captivating yet confusing.  As Aaron Saunders From The Deck Chair Blog said, “confusing in a good way”.

Go in with an open mind and play along, you’ll enjoy it. And tell Zoom and Bloom I said hello. 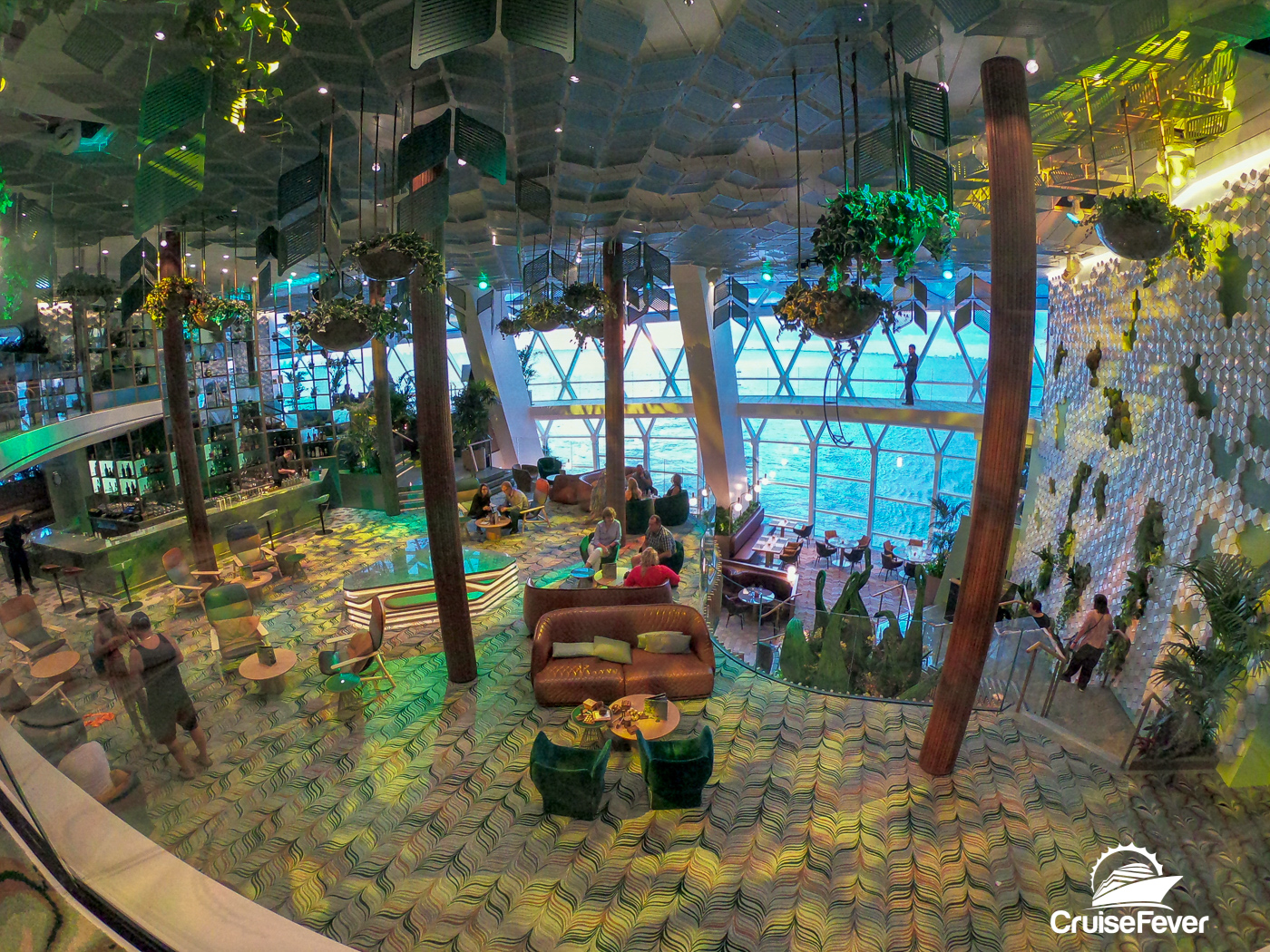 I loved the revolutionary new theater that’s onboard Celebrity Edge.  The sound system was incredible and there aren’t any bad seats in the house.  The theater did seem a little small for the size of the ship so if you want to see a show, I’d get there a few minutes early. 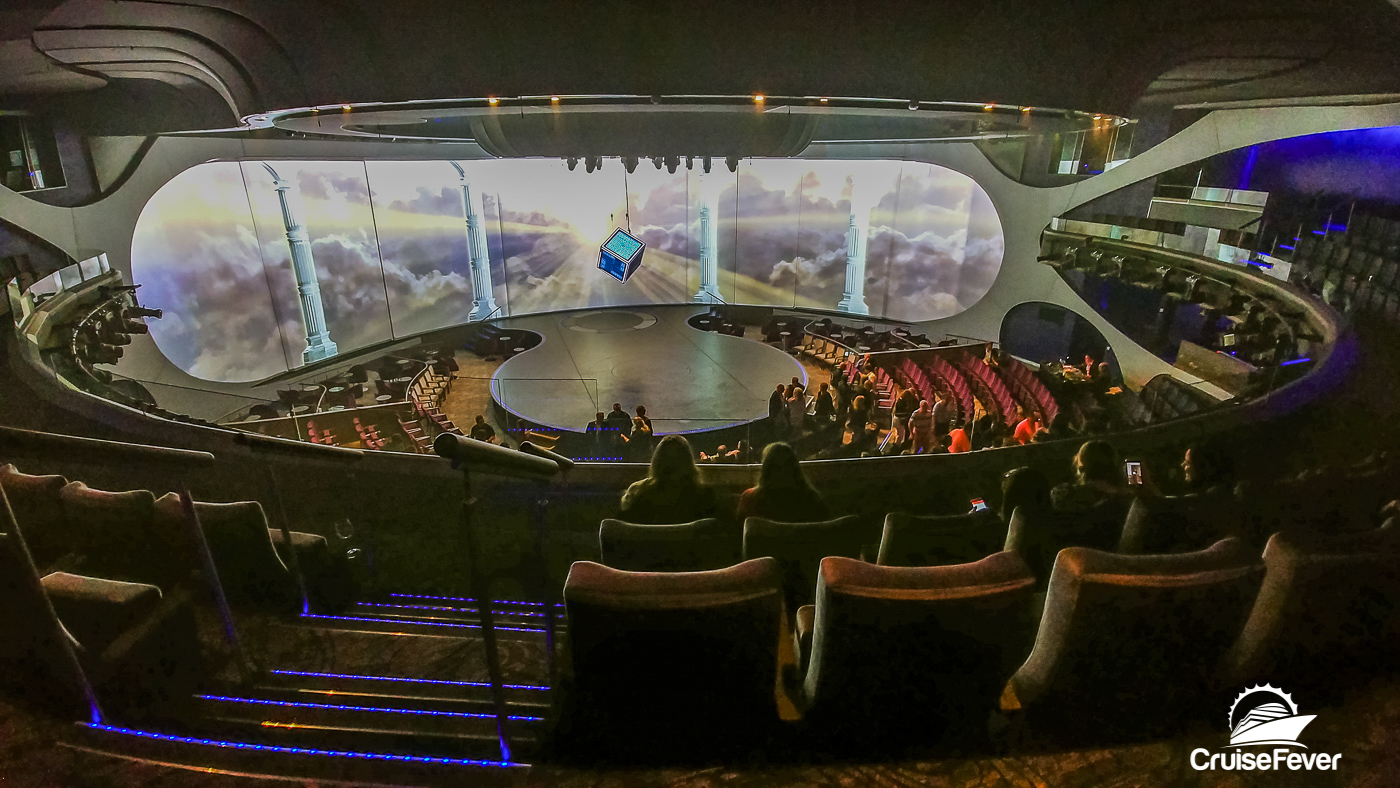 There are several high end shops including Tiffany, Bvlgari, and Cartier for those who love to shop on cruises.

I loved hanging out in the Solarium, seems like it will be a great place to spend the day on sea days.

The thermal suite in the spa is awesome. It’s free for Aquaclass guests or you can buy a day pass for $59. It’s a lot bigger than I was expecting with different rooms ranging from a dry sauna to different steam rooms.

There’s a lot of public spaces for the ship, far more than I expected for a 130,000 gross ton ship.

While onboard I was able to tour all of the different suites located on the ship. There are eight different types of suites available with my favorite being the 2,500 square foot Iconic Suite.

There are also 16 cabins for solo travelers and the best part, they include an infinite veranda so you won’t be stuck in an inside stateroom.

While these were my first impressions of Celebrity Edge, we will have more on Cruise Fever about this incredible new cruise ship later this week.

Note: Although I was a guest of Celebrity Cruises for this sailing, opinions and thoughts in this article are 100% my own.