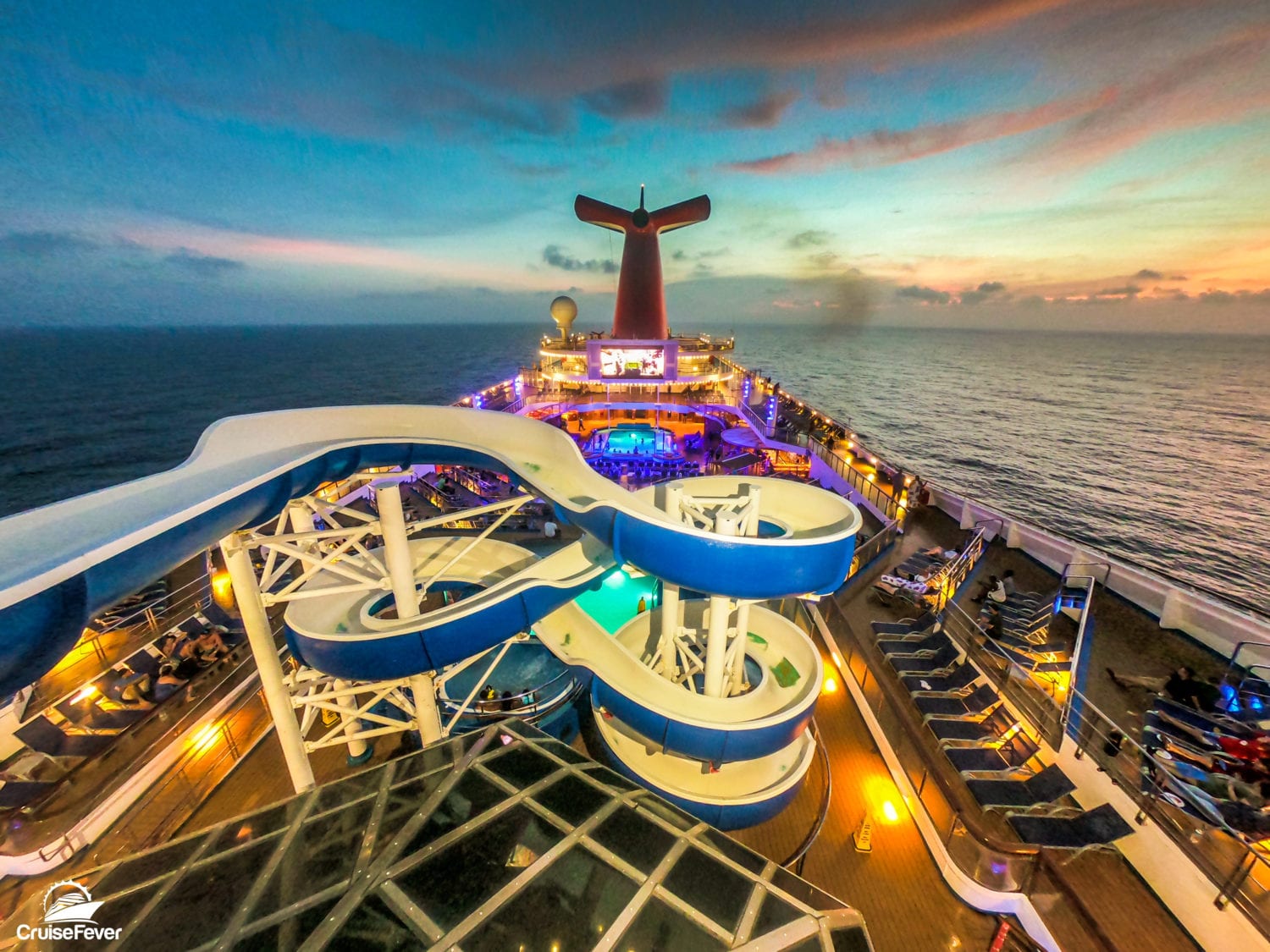 Sometimes when we sail on an older cruise ship because we found a good deal online it means we also lower our expectations.  We don’t expect much from the ship.  We book the cruise just for the itinerary or because we need a short getaway.

When I saw the $200 deal on a 4-night cruise on Carnival Victory it was hard to pass up, so I didn’t.

But once on board the ship I was once again reminded why cruise vacations are the best vacations on earth.  It didn’t matter that the ship was 18 years old or that it didn’t have as many bells and whistles as today’s ships.

I had sailed on Carnival Liberty before, and many things about Victory reminded me of Liberty from the moment I walked around the pool deck. 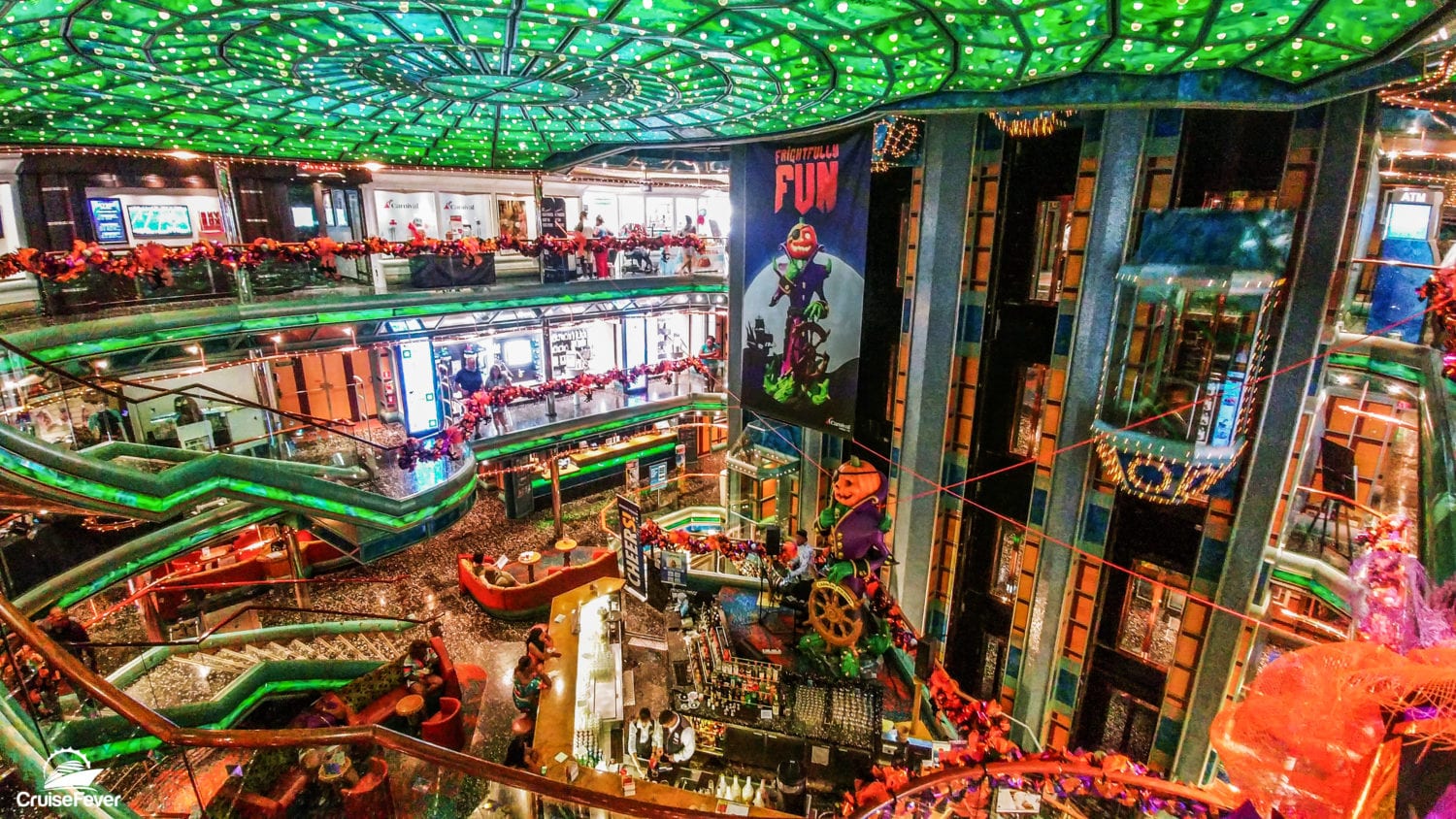 From the emerald green 9-deck atrium to the spacious 2-deck Serenity retreat to the new food options added, Carnival Victory offered a lot to like.

So let’s dig into a few details about the ship before I give my thoughts on the hits and misses of Victory.

Check out our video tour review of Carnival Victory here if you’d rather not read all my drivel:

Where is the first place you go once you get on board a cruise ship?  The buffet right?  Let’s talk about what food options are available on Carnival Victory.

Chopsticks is part of Lido Buffet and offers all kinds of Asian cuisine.  On the opposite side of the buffet the Deli is an excellent choice for lunch that provides subs and sandwiches both hot and cold.  The line can move slowly so try to stop by when it’s a bit shorter.

Besides the variety of food offered at Lido Restaurant, which has two level buffet seating, you can find several other food options on board.

Chef’s Table is the only real specialty dining restaurant available on the ship, although there some other food options that require an extra charge.

Seafood Shack, which is available for lunch and dinner has a la carte crab, shrimp, lobster, and clam chowder and the least expensive item is $4.00.   It’s located right near the aft pool, opposite from Pizza Pirate, which is free and open 24/7.

One thing to note about Pizza Pirate is that the lines can move rather slowly at certain times of day, and if you see a long line you are better off coming back later.  The pizza is excellent though, and they are made after you order what kind you want.

Near the main pool you will find Guy’s Burger Joint which has some of the best burgers at sea.  Right across from that is BlueIguana Cantina for those craving a taco or burrito.  You can also get a breakfast burrito in the morning, and the lines were usually very short.

A Bonsai Sushi Express was added to Carnival Victory as part of the 2018 refit.  It’s located on deck 5 near the casino.  There is an extra charge for this food option, and there is not a lot of seating available unless you walk over to the coffee bar.

By the way, I found at least 3 soft serve ice cream stations on the ship.  There are two opposite each other near the pool and one in the back near the aft pool. 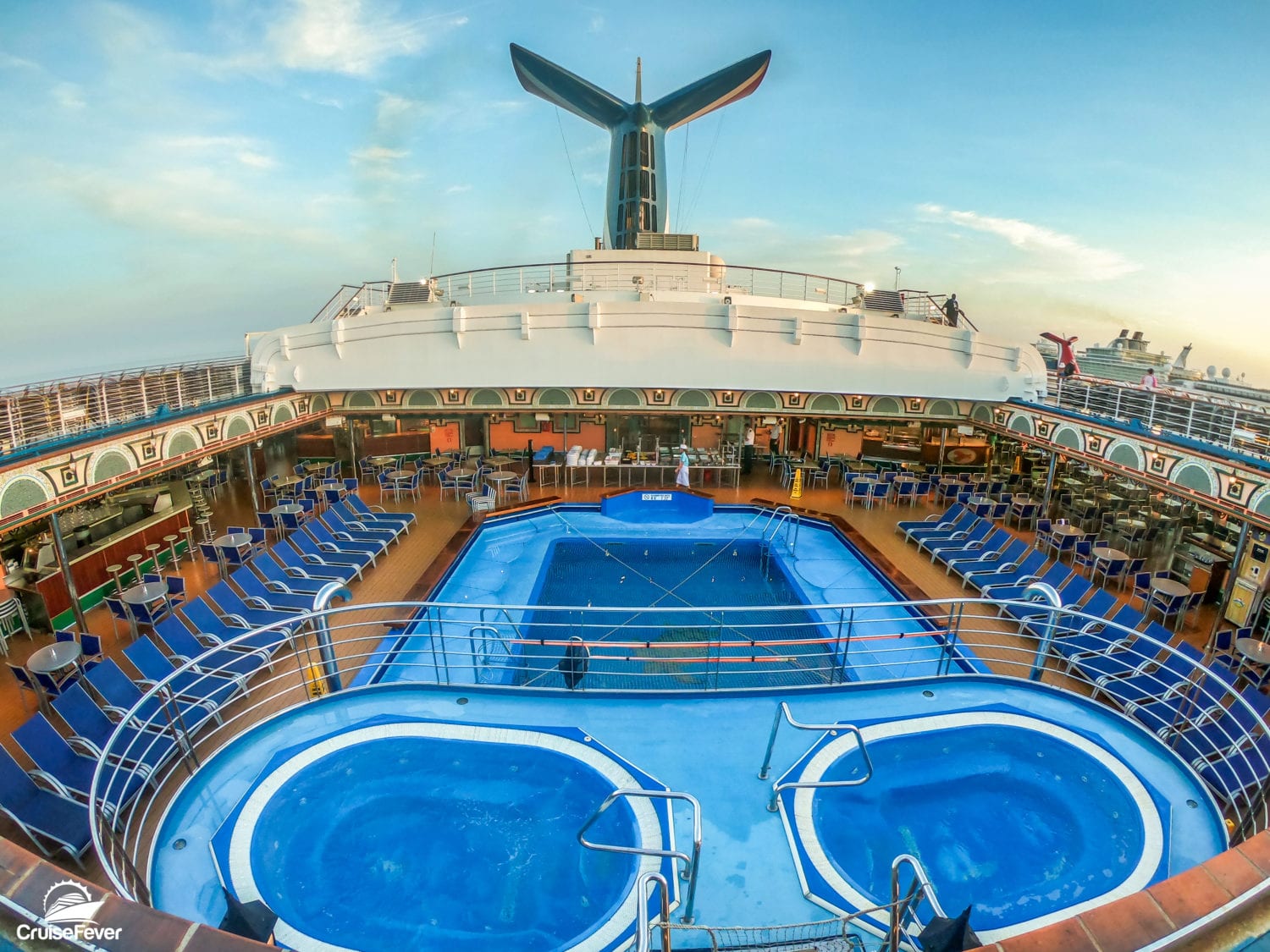 The main pool is right below the huge movie screen.  It can be quite busy during a sea day, but it’s not the only pool on board the ship.  At the bottom of the 214-foot-long waterslide is another pool with a hot tub right behind it.  There are 2 more hot tubs between these two pools so it helps spread out some of the water-seekers.

If you walk up a few decks you will find the adult-only Serenity retreat which has 2 more pools/hot tubs.  They are about the size of a large hot tub but they were not heated.  Still, they offered a nice relaxing place to cool off away from any hustle and bustle.

The aft pool has a retractable roof, and when it started to rain or got too windy it was closed to provide a nice spa like atmosphere.  It’s a salt water pool and was one of my favorite places to take a dip.  There are two more hot tubs right behind the aft pool which kept pretty busy.  This was a great place to relax because not only did you have the pool right there, but there was also Pizza Pirate, a coffee station, and an ice cream station right there.

There is no thermal suite on Carnival Victory, but I found a few other features about the spa and gym that helped make up for it.

The equipment in the gym was up to date and there was a ton of room.  It felt even bigger and more spacious than Carnival Horizon’s gym.

To enter the gym you have to walk through the men’s or women’s locker room and that’s where you will find the dry sauna and steam room.

Both of these rooms are much bigger than what you will find on most cruise ships, and even though there is only one dry sauna and one steam room for both the men and women, I found that they were rarely used at all, except by me of course.

I did have an issue with my locker locking me out.  The staff tried to open it for 15 minutes before the maintenance crew had to be called to pry it open.  Hopefully they will be updating the locking mechanisms on these lockers in the future. 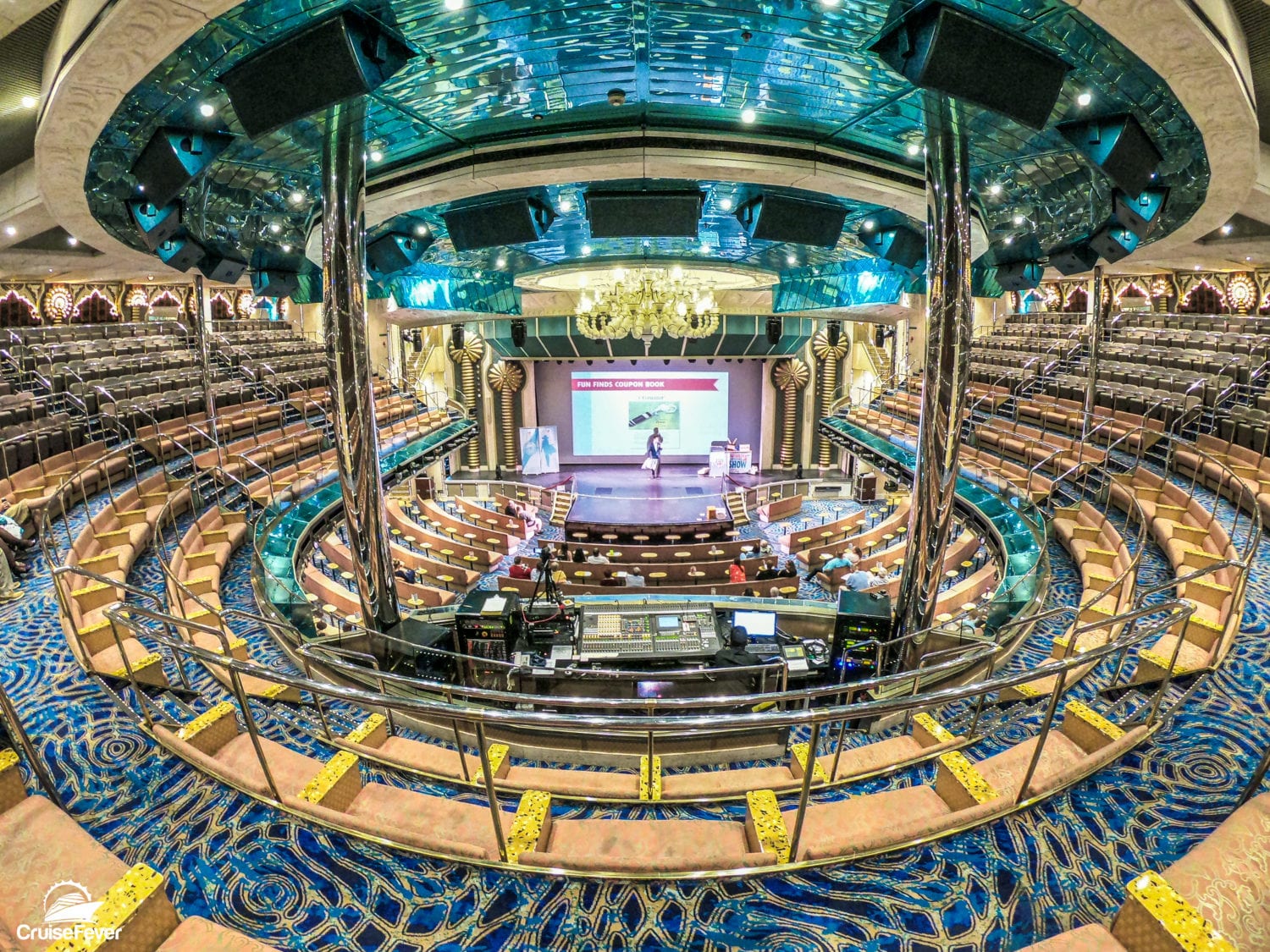 There’s always something to do on a cruise ship.  On the pool deck you have the waterslide and movie screen.  There’s also a somewhat limited mini golf course right above the jogging track.  In the middle of the jogging track there was a set of cornhole boards, but it was often so windy up there it was hard to play.

Every day had at least 1 or 2 trivia games which I always find fun, and we participated in the Gender Battle competition which the staff made really entertaining.

Caribbean Lounge hosted the nightly shows which are a Vegas-style singing and dancing display or you could head over to one of several lounges for some live music.

I can’t resist listening to a little amateur karaoke when I’m on a cruise ship, and the passengers on Carnival Victory did not disappoint.  The lounge was pretty small, but this just made it more interesting.

I went to the Military Appreciation Gathering in the Adriatic Lounge and it was such a treat.  I love that Carnival does this.  They showed their appreciation for each branch of the military and allowed veterans to say something on the mic.  There was also a video presentation from Carnival thanking the vets for their service.  Thank you Carnival for dong this for our veterans.

Carnival has made their Carnival Hub App really useful.   You can use it to see what’s going on around the ship or see what food places are open during that time.   There is also a chat feature so you can keep up with people in your party.  It does cost an extra $5.00 per person to use this though.  In my opinion this should be free to discourage people bringing their walkie talkies on board.

It was very nice being able to pull up our cruise photos using the app.  No more sifting through all those picture in the gallery.  You can allow Carnival to use facial recognition software to find your photos even easier, but I opted out of this.  Any formal pictures used our stateroom number so it was no trouble pulling up our pics on the app and making a purchase right from there.  I was even able to purchase and download the picture I wanted right to my phone.

You can purchase various internet packages with the app as well. 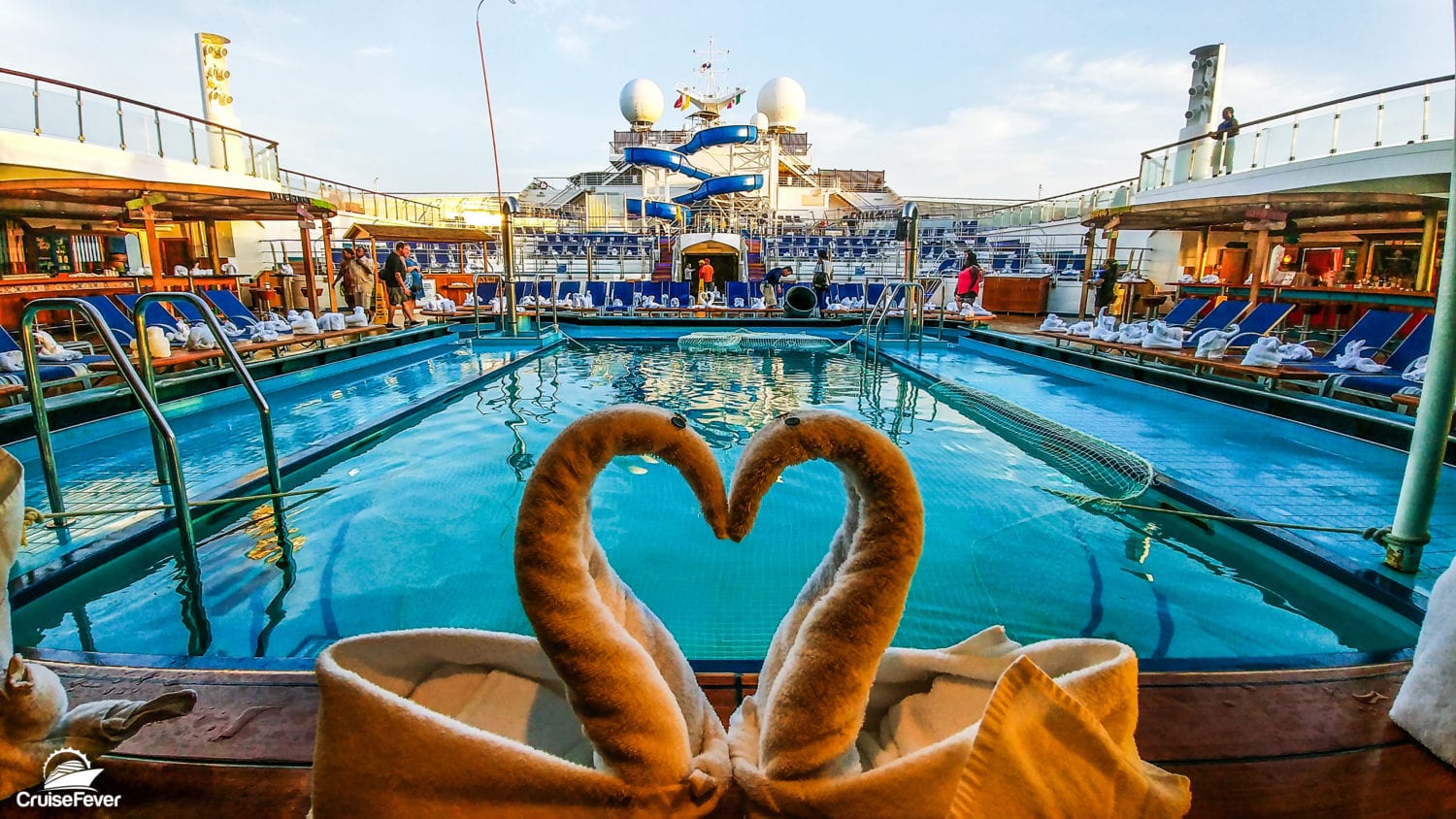 While writing this I found out that Carnival Victory will be no more in 2020.  The ship will be getting a major overhaul and will be transformed into Carnival Radiance.  You can read about it here.  But I must say that this ship had plenty of charm.   Some of the elements on Victory I liked better than some of the new ships.  The retractable roof over the aft pool, the spacious gym, and the free dry sauna and steam room made an economical cruise the perfect getaway.

The main pool area was a bit overloaded on sea days and sometimes it was hard to find a quiet place in Serenity, but the number of free food options and upgrades on this ship make it well worth a try, even before it turns into Radiance.

J. Souza
Jon got hooked on cruising after his first cruise on his honeymoon, and today he is always looking for cruise deals and reading information about the cruise industry. Jon lives in the foothills of North Carolina and wishes there were a cruise port that far inland. Jon can be reached at [email protected]
ShipsCarnivalCarnival Victory Review: 4-Night Cruise Out of Miami
Previous article
Ritz Carlton’s First Cruise Ship Touches Water for the First Time
Next article
Norwegian Cruise Line Brings Back Free Airfare and WiFi on Cruises