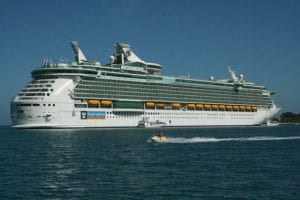 A couple from Orlando, Florida was killed over the weekend while on a shore excursion in Cozumel, Mexico during their cruise.

Susan Borges and boyfriend Jim Melillo were on a sand buggy shore excursion that was booked with a private company and not with the cruise line.  The driver of the sand buggy, Wagner Ferreira, apparently lost control of the vehicle and hit a metal bar.  Both passengers died on impact.

After receiving medical treatment at the Cozumel Medical Center, Wagner Ferreira was initially held in jail as authorities investigated the accident.  He has since been released and is now back in Florida.  He was not charged with criminal charges when released.

The story was broken by Diario de Quintana Roo, a Spanish speaking newspaper.

The couple were with friends on Royal Caribbean’s Liberty of the Seas and had been on several previous cruises.  The cruise was a 4 night cruise out of Ft Lauderdale, Florida and had just one scheduled stop in the popular cruise port of Cozumel, Mexico.

Royal Caribbean issued the following statement: “Our Care Team is providing support and assistance to guests’ family and friends.  Our thoughts are with their family and friends, and we will continue to do our very best to assist them.”

Cruise Fever offers our condolences to the family and friends of these two that passed away this weekend while cruising.

Ben Souza
Ben is a world traveler who has visited 42 countries and taken over 50 cruises. His writings have appeared and been cited in various media outlets such as Yahoo News, MSN, NPR, Drudge Report, CNN, Fox, and ABC News. Ben currently resides in Cincinnati, Ohio. Follow Ben on Instagram. Visit Ben Souza on Linkedin. You may email Ben at [email protected]
Cruise NewsFlorida Couple Die on Cruise Excursion in Cozumel
Previous article
Captain of Costa Concordia to Reveal His Story in New Book
Next article
Carnival Introduces New Cruise Fares