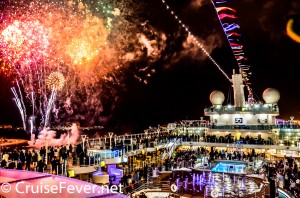 Cruise Fever had the distinct privilege of attending the christening ceremony for Regal Princess while in port at Port Everglades. Following the two-day celebration in port the ship set sail for a 3 night maiden voyage to the Bahamas where we had a chance to enjoy this new sister ship to Royal Princess.

Regal Princess comes in at 142,00 gross tons, holds around 3,500 passengers, and 1,378 crew. It is Princess’s largest cruise ship, along with Royal Princess.

In an industry that is constantly trying to find the balance between elegance and technology (or just ignoring the former), Regal Princess has struck a chord.   Cruise passengers that want some modern conveniences and luxuries at sea, while still being able to bask in the maritime heritage of nautical timelessness will feel right at home on Regal Princess.

Watch our video tour of Regal Princess and keep reading below for a more thorough review:

I fell in love with the wide open and luxurious piazza. The atrium is 50% larger than other Princess ships and offers more than just space. From 3 different decks around the atrium cruisers can enjoy some entertainment, grab a pizza from Alfredo’s, check out some photos of their vacation, or get some coffee and tea from the International Café.

Two ornately lit spiral staircases highlight the inviting atrium, and instead of elevators being the focal point, live dancing, music, and acrobatic performances dazzle cruisers who have many places to sit and soak it all in.

I’m hoping this style atrium will be on more ships going forward as it was one of my favorite places to relax, grab something to eat or drink, or just see what was going on.   There is so much to do that is right off the piazza that it really gave me reason to visit decks 5-7. 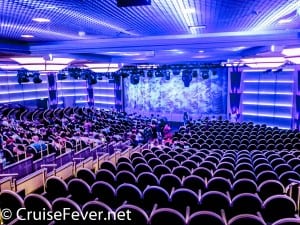 Besides all the shows and live music that take place in the main atrium Regal Princess has a few other surprises as well. Princess Live was a very unique form of entertainment that really has a novel concept. It’s a live television studio in which cruisers are invited to be the actively participating audience. Cooking shows, morning shows, family feud games, and other activities take place here, and while I was on the ship there was a Q&A with the cast of The Love Boat which was a lot of fun. It’s like a cozy theater, but with cameras and bright studio lights and the invitation to be a part of the fun.

I was only able to attend one of the shows Princess put on in Princess Theater. The theater itself is the largest on a Princess ship, but still feels relatively small compared to other ships. There is no balcony to obstruct the view, and there really are no bad seats unless you are in the very back. The performances were mainly Broadway-style song and dance shows. The singers were fantastic and the props and special effects were impressive.

Vista Lounge on Deck 7 aft was a great place to enjoy some comedy or a live music show. Troy Thirdgill busted a few guts with his comedy and the lounge was comfy and packed. I recommend getting their early for any of the shows, as there was often standing room only and many of the seats face the wrong direction for a show.

Princess had a few tricks up their sleeve when they ordered Royal Princess and Regal Princess does not fail to disappoint with a few unique features of its own. I just loved the SeaWalk. It’s not just a gimmicky idea that someone came up with, it’s actually a very cool way to enjoy spectacular views of both the ship and sea. The SeaWalk lets you look straight down through the walkway glass, 128 feet down to the ocean. Kids and grownups alike loved walking through the SeaWalk as some fought with vertigo. At night the space is even more enticing with star-like lights to dot the ceiling of the walkway.   You can see this in pictures, but it’s something that needs to be experienced as well.

Another feature unique to Princess is their fountain shows that light up the lido deck. There are 4 different light and fountain shows that dazzle cruisers, each that is synched with the led screen and exciting music. Felt like I was in Vegas for a second.

Did I mention the largest video display at sea? Huge TV screens are becoming a norm on cruise ships these days, and Regal Princess lights up the pool deck with a 33 feet wide by 20 feet tall LED screen. This makes movies under the stars crisp and realistic. Movie lovers can enjoy being wrapped in a Princess blanket while eating popcorn and watching some newly released blockbusters. 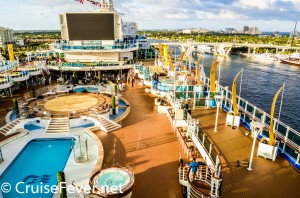 The island that showcases the fountain/light shows each night is also a place for loungers by day. There is ample room to bask in the sun on the lido deck, but it can become quite crowded on sea days. There is one main pool on the pool deck, along with a plunge pool on the opposite end. Regal Princess also has an aft pool (aka Terrace Pool) which is a great place to get away from the crowd, but it’s a much smaller pool with plenty of space to soak your feet.

My other favorite place on the ship is the retreat pool. This is an adults only area with a good size pool surrounded by cabanas that can be rented out. This area is typically quiet as well and offers great views all around the ship. Right behind the Retreat pool forward of the ship is the Sanctuary. This adult only area requires half-a-day or full-day fees to access, but for those who put a premium on relaxation and privacy, this area hits the spot. There are padded loungers all around, great views from the front of the ship, and even a couple cabanas for a couples massage. This area can be accessed for $40 for a full day.

There are 4 hot tubs in the main pool area, two above on deck 17. And there are two more hot tubs next to the retreat pool. 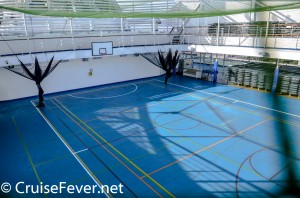 The sports deck was well thought out on Regal Princess. It’s away from the hustle and bustle of the rest of the ship, so runners who want to use the track don’t have to dance around loungers to get their running done. The basketball court is an ample size and is also used for fitness routines, volleyball, soccer, and even batting cages on some days. There is a driving range for golfers, two ping-pong tables and a foosball table all around the basketball court. Above the court is a shuffleboard court and a putting green with 7 or 8 holes. This lawn court is also used for bocce on some days.

All around the running track are some low-impact exercise machines as well, so you can work out in the open air if you’d like. 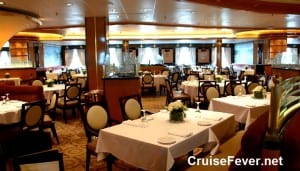 Ah yes, everyone’s favorite topic on a cruise ship. Princess Regal offers all kinds of dining options, 14 in all, and most included in your cruise fare. There are 3 main dining rooms. Concerto and Symphony are for those who chose anytime dining, and the more luxurious feeling Allegro is for guests who decided on the traditional dining option. Anytime dining is from 5:30pm – 9:30pm and traditional dining is either at 5:45pm or 8:15pm.

Specialty restaurants include Sabatini’s (an Italian restaurant) and Crown Grill (a steakhouse). These both incur a $25 per person surcharge. I loved eating at both these restaurants. I’m a sucker for great Italian food and steak so I’m a little biased here.

Other places to eat include the 24/7 International Café on deck 5, Prego Pizzeria and Trident Grill on lido deck, and Seafood Bar on deck 7.

My favorite place to eat, however, was Alfredo’s Pizzeria. I had the chance to meet Alfredo as well. He’s a marvelous chef who has been with Princess for over 40 years. This restaurant is right off the piazza on deck 6 and is included in your cruise fare. The Neapolitan pizza, calzones, and tiramisu were fantastic and fresh. And you can eat it while enjoying live music from the atrium.

For some sweet treats you can get a free ice cream from Swirls on lido deck or try some fine gelato from Gelato on deck 5.

So then there’s the buffet. There are two parts of the buffet: Horizon Court and Horizon Bistro. This buffet is huge and has plenty of options. Everything seemed really fresh and I love how Princess brings you your drink, utensils, and napkin, so you only need to carry your plate to your seat. Right in the middle of Horizon Court and Bistro is the Pastry Shop with some of the most tantalizing cookies, pastries, and sweet cupcakes on the high seas.

Our balcony stateroom was of ample size and well laid out. The only thing that sort of bothered me was the lack of drawers. There is an open closet when you first walk in, but the only drawers are in the nightstands by the bed. But at least the closet was large enough to hold all my clothes just fine. Check out a video of a balcony stateroom here: 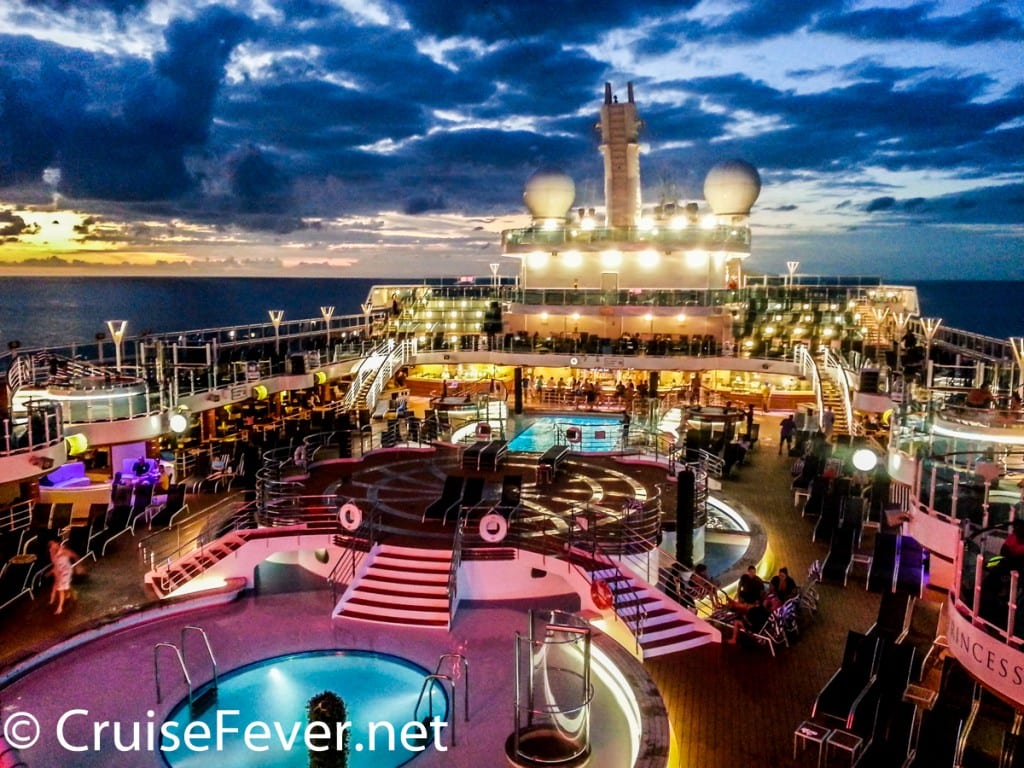 J. Souza
Jon got hooked on cruising after his first cruise on his honeymoon, and today he is always looking for cruise deals and reading information about the cruise industry. Jon lives in the foothills of North Carolina and wishes there were a cruise port that far inland. Jon can be reached at [email protected]
ShipsPrincessRegal Princess Cruise Ship Review and Video Tour
Previous article
How to Avoid Being Pickpocketed or Mugged While Cruising
Next article
Norovirus Outbreak Hits Cruise Ship Affecting 172 Passengers/Crew Members