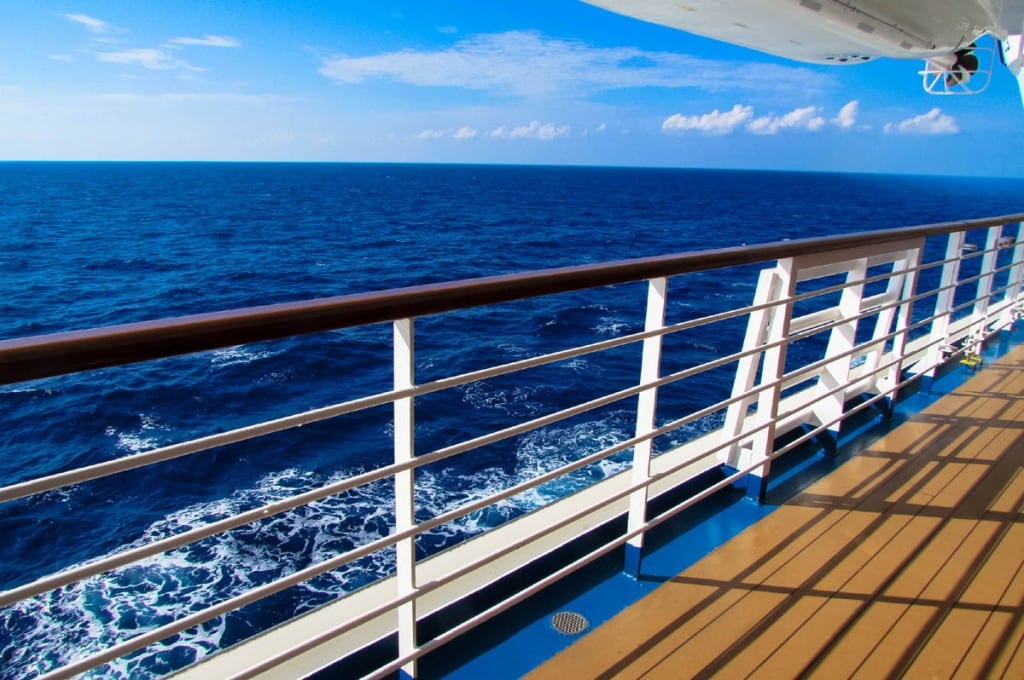 A passenger on a Carnival cruise sued the cruise line after he burned his feet during a hairy man contest on the Carnival Legend.  The lawsuit claimed that Kurt Gies suffered injuries, pain, and mental anguish due to the hot surface of the Lido Deck.

Gies claimed that towels were laid down on the hot deck but were removed before the contest began.  Although no other participants complained about their feet burning, Gies said he had “serious and permanent scarring, disfigurement, and embarrassment”.

Two men filed a lawsuit against Royal Caribbean in 2012 after being locked up in the ship’s brig after a drunk woman falsely accused them of rape.  After woman recanted her story, the lawsuit said that the cruise line refused to release the men or to modify the conditions of their imprisonment.  What is so crazy about this lawsuit?  The men were suing Royal Caribbean for a staggering $100 million in damages.

Carnival was also the target of another lawsuit when a mother sued the cruise line after her daughter died on a cruise.  The lawsuit stated that Carnival was “fostering a party atmosphere” and failing to properly train their staff.

Cruise passenger Angel Holcomb sat down at a poker table and began to have a few drinks in the casino on the Carnival Conquest. After having too much to drink, Angel’s fiance found her lost, confused, stumbling, and falling in a hallway due to being too intoxicated to walk.  When she got out of bed to have a drink of water, she dropped the glass and a shard tore through her left arm severing her ulnar artery.

The lawsuit also stated that the crew on the Conquest was not properly trained in serving alcohol to passengers allowing guests to become drunk and hurt themselves.

One of the absolute craziest lawsuits happened in 2011 when a passenger sued a cruise line saying that the ship went too fast and swayed from side to side causing her to get sick.  The case was dismissed by the Indiana Court of Appeals.

In 2013, Alexandra Kirby made national news for suing Carnival after she became extremely intoxicated and “fell overboard” on the Carnival Destiny (now Sunshine).  Her lawyers said that “she was holding onto the balcony’s wooden banister, lost her grip and balance, slipped off the ground and fell overboard into the ocean”.

Kirby was rescued 90 minutes later with multiple broken bones, blood clots, and lung contusions. The lawsuit stated that the cruise line encouraged her to drink more by offering $5 casino coupons with each purchase.  Also included in the lawsuit were two of the ship’s doctors for negligence and intentional infliction of emotional distress.

$100 million wasn’t enough for a Polish crewman on the Liberty of the Seas who sued Royal Caribbean for over a quarter billion dollars ($271 million) after he suffered a stroke that left him partially paralyzed in 2012.  The lawsuit asked for $77 million in damages, $194 million in punitive damages, and $19.4 million for his wife because of how the situation impacted her.

Ben Souza
Ben is a world traveler who has visited 42 countries and taken over 50 cruises. His writings have appeared and been cited in various media outlets such as Yahoo News, MSN, NPR, Drudge Report, CNN, Fox, and ABC News. Ben currently resides in Cincinnati, Ohio. Follow Ben on Instagram. Visit Ben Souza on Linkedin. You may email Ben at [email protected]
Opinion Craziest Lawsuits Filed by Cruise Passengers
Previous articleCruise Line Will Match Loyalty Status from other Cruise Lines
Next articleFreedom of the Seas Catches Fire in Jamaica, No Passengers Injured

ABOUT US
Two brothers started Cruise Fever in 2011 when they decided they couldn't stop cruising so they might as well write about it. Do you have Cruise Fever too? Follow along on this incredible voyage!
FOLLOW US
© 2011-2021, Cruise Fever ®. All rights reserved
1.5K Shares
Share1.5K
Tweet
Pin
Email
Share