Norwegian Cruise Line took delivery of their largest cruise ship to date and the 5th largest in the world, Norwegian Escape, from Meyer Werft in a ceremony in Bermerhaven, Germany. 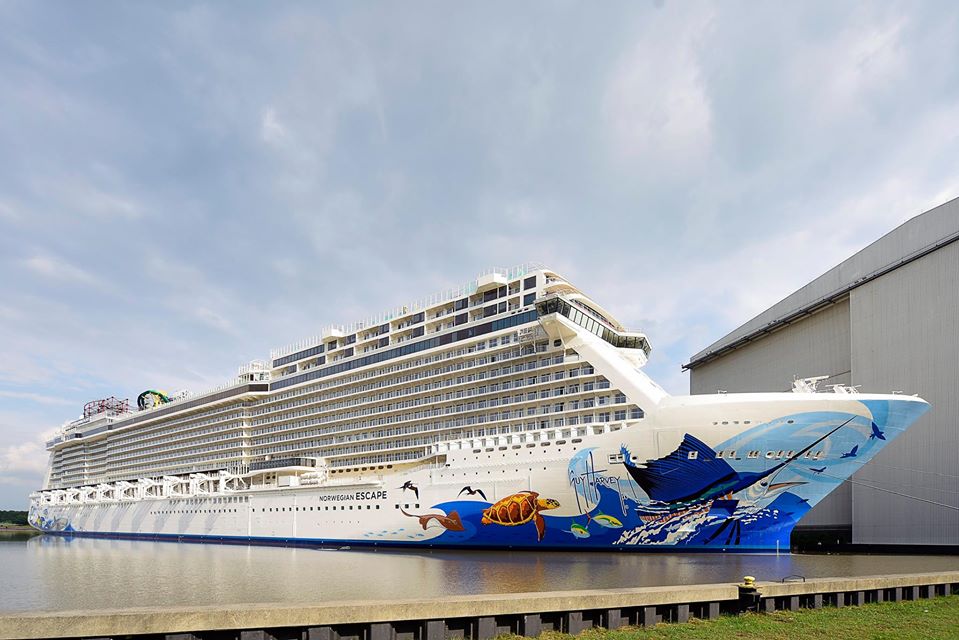 “Norwegian Escape’s arrival marks a true evolution for our brand—we’ve capitalized on the best of our Breakaway Class ships and taken freedom and flexibility to the next level with this incredible new ship.

Once again, the team at MEYER WERFT, along with our new build and operations teams, and all of the ship’s officers and crew have done a remarkable job and we cannot wait to welcome guests on board this spectacular new vessel.”

Norwegian Escape will homeport in the cruise capital of the world, PortMiami.  The ship will sail six, seven, and eight night cruises to the Eastern and Western Caribbean beginning in November 2016.

Norwegian Escape, the largest in Norwegian’s fleet of 14 vessels, features an elevated design that makes for a decidedly upscale experience. Quality finishes, curated artwork and the most luxurious The Haven by Norwegian™ exclusive ship–within-a-ship suite complex are just a few of the standout features that put Norwegian Escape in a class of her own.

Norwegian Escape’s Haven is the largest in the fleet and the most luxurious. At the heart of the private enclave on the top of the ship lies a three-story covered courtyard. An expanded forward sundeck with a cantilevered whirlpool, along with a new outdoor dining space in the Haven’s private restaurant make Norwegian Escape’s Haven the ultimate small ship experience, while still providing the freedom to enjoy large ship dining, entertainment and amenities.

Nightlife onboard includes outposts of several popular land-based outlets, including the first-ever Jimmy Buffett’s Margaritaville restaurant and 5 O’Clock Somewhere Bar at sea, a music venue and outdoor bar on The Waterfront that features live nightly performances. The District Brew House, a hip, urban craft beer hall featuring an exclusive partnership with Miami’s own Wynwood Brewing Company, will serve up more than 24 draft beers while The Cellars, A Michael Mondavi Family Wine Bar, features an array of immersive wine experiences, focusing on tasting, education, and the enjoyment of wine. Norwegian Escape will also feature Miami’s oldest and most legendary bar, Tobacco Road.

Norwegian Escape’s recreation spaces are unrivaled, with the largest ropes course at sea leading a wide array of activities. This three-story multiplex of heart-pounding challenges complete with two planks and five Sky Rails, zip tracks that allow guests to soar through the air. On the top of the ship, guests will find a redesigned pool deck area that features an open area for sunbathing, a double-deck bar and two new large format LED screens. Norwegian Escape’s Aqua Park is the largest at sea and includes a new tandem Aqua Racer slide, complete with a clear acrylic section to further enhance the thrill of this adventure ride. Adding to the family fun, Norwegian Escape features an expanded Kids’ Aqua Park with an enclosed slide, rope climb fun zone and spray cannons for kids to splash and play in their own designated space. Along with an expanded Splash Academy youth center that includes dedicated play spaces for specific age groups, Norwegian Escape also offers the line’s first nursery for cruisers two and under.

In addition to family oceanview staterooms that accommodate up to five guests, Norwegian Escape’s accommodations include Studios, designed and priced for solo travelers; and many options for families, multi-generational groups, spa enthusiasts and more.