The Best 40 Photos from Our Viking River Cruise in Portugal 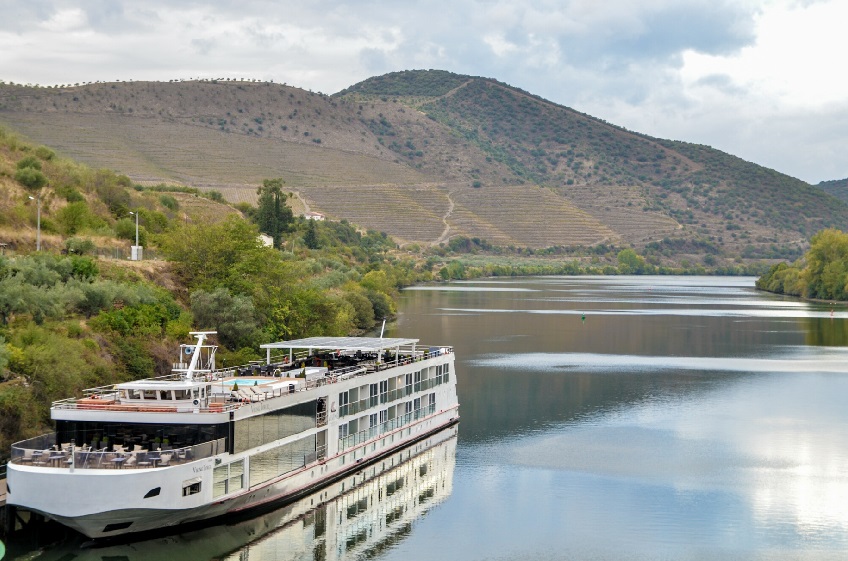 Viking Cruises extended to us an invitation we simply could not refuse.  This was an opportunity to take a 10 day river cruise down the Douro River in Portugal.  It should be noted that 2 of those days were spent in lovely Lisbon as part of the pre-cruise experience.

You can see photos of our ship and what it looked like inside and out here.  You can also see our exact itinerary from this river cruise here.

I found Portugal to be one of the most beautiful countries I’ve ever seen.  I was constantly blown away by the scenery as we cruised the Douro in Portugal to the edge of Spain.  Every hillside was terraced and every bend in the river brought new sites of vineyards, olive groves, and quaint houses overlooking the Douro valley.  Many of these homes were abandoned and brought reflections of their history.

It was hard to narrow down how many photos I would put in this blog post, but here are what I thought were the best images in the order in which they were taken on the trip.  Hopefully it will to show you what kind of scenes we were able to see on this River of Gold cruise with Viking.  And a special thanks to Viking Cruises for allowing us to go on this river cruise.

The purpose of this post is to show potential cruisers what a River of Gold cruise with Viking will allow you to see and experience.

Even after Lisbon was decimated by an earthquake in 1755 it has been rebuilt in a rich and colorful way that reveals its splendor.  Artistic mosaics were found along almost every sidewalk as we strolled the cobblestone streets and viewed the brilliant hues of this Portuguese city.

Here are our best photos of Lisbon.

Just after I fell in love with Lisbon, we took a bus ride up to Porto where our cruise officially began, and I was absolutely smitten by this city.  I think you will see why when you see our pictures of this magical place.

This baroque palace was home of the last Count of Vila Real and you can feel the regal vibes emanating from this place.  We were not allowed to get pictures from the inside, but hopefully you will be able to feel just how spectacular Mateus Palace is by looking at these photos.

On day 6 we spent extra time just sailing the Douro River and enjoying the rich scenes of this valley.  Here are some images from all along the river.  I loved being on the sun deck while we were sailing so I could get 360 degree views of this gorgeous country.

We didn’t spend much time in the quaint city of Régua, but I did want to post a photo I took there.  It’s a small town that has unique gift shops, bakeries, and cafes, and offers a glimpse at Portuguese life along the Douro.

Located 2,200 feet above sea level, this castle offers amazing panoramic views of the city below.  Keep in mind there are some steep, narrow streets that might be too strenuous for some to walk.  It was a very windy day when we toured Castelo Rodrigo, which is one of twelve Portuguese historic parishes.  As soon as we walked in the front gate we were offered local almonds to eat.  I was hesitant to try one but I’m so glad I did.  Flavors like honey glazed, smoked, cinnamon and sugar coated, and herbs made these almonds one of my favorite Portuguese snacks.  So of course we bought some in the gift shop at the castle.

The town’s medieval alleys and houses really took us back in time, like it was the set of a movie.

While most of this cruise was spent in Portugal, you can’t get this close to Salamanca, Spain and not visit it.  This might have been my favorite destination and you will see why once you see the pictures of this enchanting city.  It was a longer bus ride to the city, but well worth it in my opinion.  But as always, if passengers on the Viking Torgil wanted to stay on the ship and have a day off, they could certainly do that.

See why so many love to visit this ancient city, which is another UNESCO World Heritage site.

Lamego is a small town that is mostly known for  its baroque Sanctuary of Our Lady of Remedies.  The church dates back to the 14th century and is considered by many to be an architectural masterpiece.  It is still used by pilgrims today who climb the 686 steps.

For #40 I thought I would end the post with a shot of our Viking ship, Viking Torgil.  There’s nothing like exploring the world in one of these loungers on the sun deck.  This is the city of Porto and I would really love to go back to visit this wonderful city.

J. Souza
Jon got hooked on cruising after his first cruise on his honeymoon, and today he is always looking for cruise deals and reading information about the cruise industry. Jon lives in the foothills of North Carolina and wishes there were a cruise port that far inland. Jon can be reached at [email protected]
River CruisesThe Best 40 Photos from Our Viking River Cruise in Portugal
Previous article
Man Cruises 1,000 Nights on the Same Cruise Line
Next article
Princess Cruises Will Name New Ship Majestic Princess

Types of Travelers Who Would Like a River Cruise

5 Reasons a Viking River Cruise Might Be for You

Types of Travelers Who Would Like a River Cruise

5 Reasons a Viking River Cruise Might Be for You

Reasons to Take a Christmas Markets Cruise with Viking Cruises