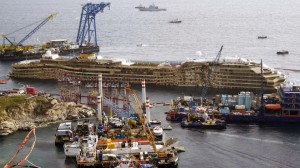 Human remains have been found by divers while searching the recently uprighted Costa Concordia.  Of the 32 that perished the night that the cruise ship hit a reef off the coast of Italy, two of the bodies have yet to be recovered.

Officials believe that the remains belong to Russel Rebello, an Indian waiter on board the Concordia. If the remains do belong to Mr Rebello, the body of Sicily native Maria Grazia Trecarichi would be the only one that would still be missing.    The remains were found on the 3rd deck of the ship.

There were earlier reports that divers had found human remains a couple weeks ago, but testing determined that they belong to an animal, not a human.

It will be several days before the results can be confirmed.  A Italian civil protection agency has said that Mr Rebello’s family has been notified about the development.

Both Rebello and Trecarichi have been presumed dead, even though their bodies were not found.  They are the only two passengers/crew members that remain unaccounted for.  Rubello was reportedly last seen helping passengers off of the cruise ship.   Ever since the vessel was uprighted in September, officials have made the recovery of the bodies their top priority.

The Concordia was uprighted last month in a procedure known as parbuckling.  While this had never been attempted to a ship this size, it was the first step in a process that will allow for the removal of the half sunken ship.  If everything continues as planned, the vessel will be towed to a salvage yard in the spring/summer of 2014 and scrapped.   Workers will then attempt to repair the damage reef and return the water near Giglio to the condition it was before the shipwreck.

Cruise Fever will continue to monitor the Costa Concordia and will have all updates and news as information comes in.