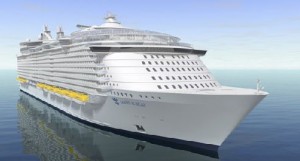 The Allure and Oasis of the Seas will soon have a sister ship, according to a rumor by Turun Sanomat. The ship would be built in Finland’s Turku shipyard, the same shipyard where the Allure/Oasis were built.

The shipyard was disappointed when Royal Caribbean recently ordered two smaller ships (Sunshine Class)  to be built in Germany.

If the latest generation of  Oasis Class ship is built, it will be launched in 2015/16 and cost over $1.3 billion.  It will take about 12,000 person years to complete it, roughly the same the the previous two ships.

There have not been any details given about the ship or which port it will call home.  The Allure/Oasis currently sail out of Port Everglades in Ft. Lauderdale, Florida with week long voyages to the Caribbean.

The Allure/Oasis of the Seas are the world’s largest cruise ships with each one weighing over 225,000 gross tons.  The Allure takes the title as the largest since it is 3 inches longer than the Oasis.

Time will soon tell whether or not this rumor is true.  Royal Caribbean has a policy where they do not comment on rumors.  Cruise Fever will have all updates when more information becomes available.