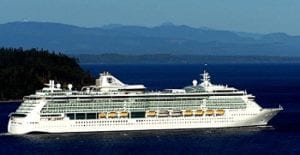 Just 4 miles off the coast of Italy a Royal Caribbean crewmember has been reported to have gone over the side of the ship.   The Serenade of the Seas was experiencing strong winds and rough seas when the crewmember went overboard.

The Italian news paper Gazzetta  del Sud first reported on this incident earlier today, and at this time the crewmember has not been found.

At the time of the incident, the water temperatures were around 68 degrees Fahrenheit, and the winds were gusting up to 60 miles per hour.

The Italian Coast Guard was notified immediately and began searching for the missing Serenade of the Seas crewmember.

Although news reports have stated that the person fell from the ship and went overboard, there have been some social media reports that the crewmember jumped from deck 11 just before 4:30am local time.

This has been the second report of a person going overboard from a cruise ship this week, with the Allure of the Seas reporting a 47-year-old woman going overboard on Sunday night.  The Coast Guard has since given up the search for the woman.

The Serenade of the Seas is currently sailing around the Mediterranean, but in December of 2013 will be sailing out of New Orleans.

In both incidents other cruise ships and vessels came to help in the search.  Our prayers are with the missing and the family members who are still awaiting some news.

J. Souza
Jon got hooked on cruising after his first cruise on his honeymoon, and today he is always looking for cruise deals and reading information about the cruise industry. Jon lives in the foothills of North Carolina and wishes there were a cruise port that far inland. Jon can be reached at [email protected]
Cruise News Crewmember of Royal Caribbean Ship Falls Into Waters
Previous articleHurricane Leslie Eyes Cruise Ships in Bermuda
Next articleCarnival Freedom Review and Tips