The Cayman Compass is reporting that the Carnival Magic mistakenly dropped anchor in an unauthorized zone damaging pristine live coral in Georgetown, Grand Cayman on Wednesday. 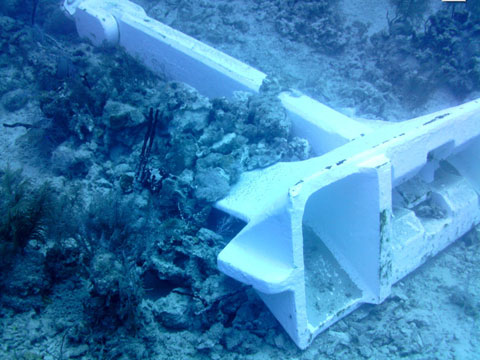 Tim Austin, the deputy director of the Department of Environment, said that due to the size of the large anchor, damage was significant. Live coral and sediment were crushed under the heavy weight of the anchor.

The DoE said that the Carnival Magic was guided by pilot boats to anchor outside of the designated areas.  There are four areas designated for cruise ships to anchor where no coral will be damaged.

The live coral in these areas has been long destroyed over the years with ships coming in to anchor at the Caribbean island.

The Marine Conservation Law states that it is an offense for any boaters to damage live coral reefs off the coast of the Cayman Islands.  The DoE’s website encourages boaters to use public moorings.

Tim Austin went on to say:

“Coral is already under a threat by a myriad of impacts, from climate changes to human impact.

The impact of losing any live coral has a big knock-on affect. Coral is very slow growing and it will take five to six decades to put back what was lost in a few hours yesterday.”

The Port Authority’s cruise operations and security manager said that the port pilot directs the ships to the anchorage point and tells them exactly where to drop anchor.

Strong winds have been blamed for the reason why the cruise ship was over 200 yards outside of the proper anchor zone.

Workers at Don Foster’s Dive Shop noticed that the Carnival Magic was anchored in an area where cruise ships never dock.   After notifying the Port Authority, they had divers sent down to see if any damage was done to the reef.  They look several pictures of the anchor and chains sitting on the damaged reef.

By noon, the ship was moved to an area safe for anchoring.

Ben Souza
Ben is a world traveler who has visited 40+ countries and taken over 70 cruises. His writings have appeared and been cited in various media outlets such as Yahoo News, MSN, NPR, Drudge Report, CNN, Fox, and ABC News. Ben currently resides in Cincinnati, Ohio. Follow Ben on Instagram. Visit Ben Souza on Linkedin. You may email Ben at [email protected]
Cruise NewsCoral Reef in Cayman Islands Crushed by Cruise Ship Anchor
Previous article
Night Club Under the Stars Coming to the Regal Princess
Next article
Construction Beings on Pinnacle Class Cruise Ship by Holland America