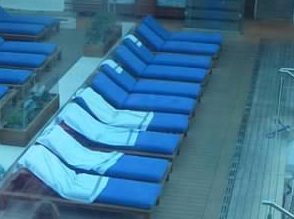 It only takes a few rude cruise passengers to ruin the experience for the whole pool deck.  One of the biggest complaints cruisers have had to deal with for years is “deck chair saving” and Carnival Cruise Lines is finally fed up and doing something about this annoying trend.

It happens on most other cruise lines as well.  Cruisers get up at 6 in the morning, toting their towels with them, and place their towels over entire rows of deck chairs to “save” them for their swim 5 hours later.  I’m sure most of our readers here are familiar with this rude ritual and will be delighted to hear that Carnival is finally doing something about it.

Yesterday, John Heald, Carnival’s top cruise director, announced on his Facebook page that the cruise line will be starting a new policy that is similar to how parking spots are regulated.   The staff will place stickers on any deck chairs being saved with the current time.  If the chairs are still not being occupied after 40 minutes staffers will take the towels to the towel station and leave a note on the chairs explaining what has happened.

Carnival is not against deck chair saving entirely.  They are just trying to crack down on the cruisers who save their deck chairs all day while not using them, and while other cruisers who want to take a swim are left to wander around the pool looking for the ever so rare empty deck chair.

Right now this new policy is being tested on the Carnival Breeze but Heald stated the change should roll out fleetwide once these preliminary tests have been conducted and tweaked.

“It has been a subject discussed over and over again, and it has been so because it continues to be a concern,” Heald notes. “We went with 40 minutes as we felt that this was a fair amount of time if guests get up to eat, drink, pee, swim or slide.”

So what do you regular cruisers think about this new policy?  Do you love it? Hate it?  We personally think it will be good for the cruise industry as a whole, but Carnival will have some issues to work through in implementing this.  For instance, if someone reserves a deck chair and has a sticker placed on it, but then comes back to the chair and then back into the pool is everything reset?

Either way, anything that stops rude people from doing rude things on a cruise ship is a positive thing and should be encouraged more in other areas as well.

Leave your comments below.

J. Souza
Jon got hooked on cruising after his first cruise on his honeymoon, and today he is always looking for cruise deals and reading information about the cruise industry. Jon lives in the foothills of North Carolina and wishes there were a cruise port that far inland. Jon can be reached at [email protected]
Cruise NewsCarnival’s New Policy Puts an End to Overt Deck Chair Saving
Previous article
Carnival Cruise Lines to Start Head Counts at Muster Drills
Next article
Hurricane Ernesto has Cruises Changing Itineraries to the Caribbean