An amazing feat of engineering began the final chapter of the Costa Concordia when the cruise ship arrived in Genoa early on Sunday. 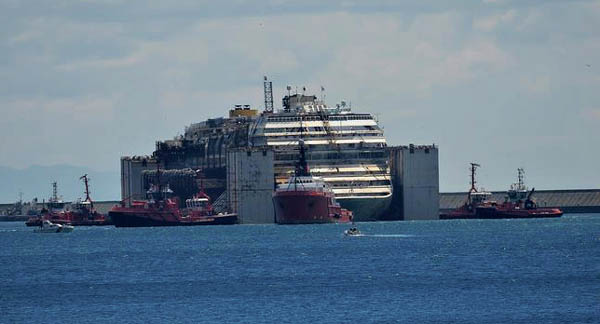 The slow four day journey from the wreck site to the salvage yard was a sad reminder of the 32 passengers and crew members that lost their lives when the Concordia hit a reef off of the coast on Italy in January 2012.

Former captain of the Concordia Francesco Schettino is currently on trial for manslaughter, abandoning ship, and causing a maritime disaster.  He was attempting a risky salute or “fly-by” near the island of Giglio which caused the ship to hit the reef.

Once the ship has been secured into dry dock, search will being for the one body (crew member Russel Rebello) that has yet to be recovered.

The $1.5 billion recovery process was the most expensive and largest salvage operation ever attempted.

What’s next for the Concordia? The ship will be dismantled in a process that will take approximately 2 years.  However, there are still some luggage and personal items belonging to passengers that are still on the cruise ship.  To date, 24 metric tons of debris (dishes, personal items, furniture etc) have been recovered.

After the personal belongings have been removed, over 80% of the ship will be recycled and reused.  This includes everything from plumbing pipes, copper wiring, kitchens and plastic room fittings.

The 50,000 tons of steel that are left will be melted down and sold so they can be used for cars, construction girders, and even other ships.

Ben Souza
Ben is a world traveler who has visited 42 countries and taken over 50 cruises. His writings have appeared and been cited in various media outlets such as Yahoo News, MSN, NPR, Drudge Report, CNN, Fox, and ABC News. Ben currently resides in Cincinnati, Ohio. Follow Ben on Instagram. Visit Ben Souza on Linkedin. You may email Ben at [email protected]
Cruise NewsCosta Concordia Sails Final Voyage To Scrap Yard
Previous article
Video: Behind the Scenes Look at Cabin Production for Quantum of the Seas
Next article
Cruise Line Under Fire For Not Allowing Family to Rebook Cruise After Son Diagnosed With Cancer