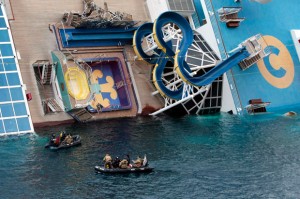 Five months after the Costa Concordia cruise ship hit a reef off of the coast of Italy killing 32 passengers and crew members, work has begun on up-righting the ship so she can be moved to a salvage yard.

Work will be done by Titan Salvage of Pompano Beach, Florida and its Italian partner Micoperi.  They were awarded the contract in April after several companies submitted bids to clean up the wreckage of the 114,000 ton ship.

Several preparatory measures are being taken.  The swimming pool slide, the giant “C”, and the mast will be removed before any work is done.

The project is expected to take up to a year and will be done in four stages.  After the caissons are attached to the side of the Concordia, two cranes will pull the ship upright.  Caissons will then be added to the left side of the cruise ship, drained and filled with air.

Titan Salvage is committed to cleaning up the wreckage with minimal damage to the surrounding environment.  Once the ship is removed, work will begin on replanting marine flora life and any damage that the ship may have caused.