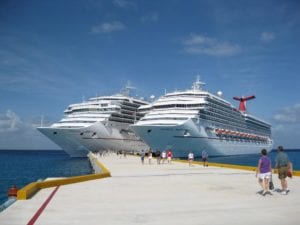 The past few years have resulted in more and more cruise passengers complaining about how the cruise line “nickel and dime” them throughout their cruise.  Specialty dining charges, the ship’s photographers, and soda costs are among the most common complaints.  But the question is, do cruise lines nickle and dime passengers?

Years ago, there was no such thing as specialty restaurants that carry a $10-25 charge per person for having dinner at them instead of the buffet or main dining room.  Your cruise fare included virtually everything on board.

Over the past 10-15 years, cruise fares have dropped even though fuel prices have skyrocketed and food prices have risen considerably. Instead of raising fares to make up for the extra costs, cruise lines have resorted to measures of creativity in attempts to make a profit and stay afloat.

Yes, cruise ships that have bowling alleys will charge you for a game of bowling.  It is not hard to find a  photographer as they are all over the ship.  They are even taking your picture before you get on the ship hoping that you will spend the $10-15 to take the picture home as a memory of your cruise.  If you want room service after midnight, there is usually a charge.

Cruisers will pay top dollar for alcoholic drinks, shore excursions while the ship is in port, and for massages, pedicures, and treatments at the spa.

Some ships also have “mini flea markets” as I like to call them.  They will set up tables and sell chains by the inch, cheap purses and watches, and other small trinkets.

I have even read that cruisers have complained about being nickle and dimed because of the $20 bingo games the ships have.  While I don’t get the logic behind those complaints, one point is obviously clear.  Many people do not like to be offered something extra for a few extra dollars throughout their cruise.

However, what passengers need to understand is that without the cruise line making money off of these extras, they would have to pay considerably more for their cruise fare.  The great thing about them is that you can go on a cruise and not spend one extra penny, and have a great time while paying a low price.

Andrew Stuart, the Executive VP of Sales and Services of Norwegian Cruise Line, was on a CNBC special called, “Cruise Inc: Big Money on the High Seas”.  He explained that cruise lines make a majority of their money in 3 areas (besides cruise fares).  Alcohol, shore excursions, and the casino bring the cruise lines much needed revenue that help keep basic cruise fares low.

There are cruises that are truly “all-inclusive” that include virtually everything from alcohol to shore excursions.  However, don’t expect to find 7 night cruise fares anywhere near $599 a person.

Before you complain about being nickel and dimed on your next cruise, remember that the cruise lines provide extras to keep the basic costs down for everyone.  While some would rather pay more and not have to deal with it, many families enjoy the lower fares and are able to take a cruise because of them.

How do you feel about the “nickel and dime” complaints on cruises?  Leave us a comment below, we would love to hear from you.