To date, only the Oasis class cruise ships from Royal Caribbean has surpassed 200,000 gross tons in size. However, that will soon change as one cruise line has ordered two massive 201,000 gross ton ships. 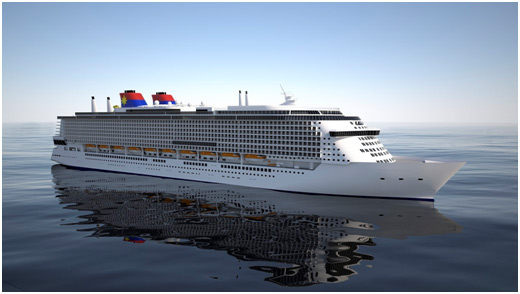 Star Cruises, owned by Genting Hong Kong, has ordered two 201,000 gross ton Global Class cruise ships that will be delivered in 2019 and 2020.  They will be the second largest class of cruise ships in the world when completed and the ships will hold 5,000 passengers at double occupancy.  The ships will be built and designed for the Chinese cruise market.  The ships will offer an international cruise experience for all parts of the world where passengers will feel at home with food, culture, shows, enrichment programs, and excursions.

With competition heating up as cruise lines jockey for position in the fast growing Chinese cruise market, these new cruise ships will position Star Cruises as the youngest, largest, and most innovative cruise line in Asia.

The Global Class mega ships will be built by Lloyd Werft Group.  The company has two huge covered new building drydocks that have built the recent mega ships from Norwegian Cruise Line and the Quantum class ships for Royal Caribbean. In addition to the covered drydocks, they also have a ship launching platform and half a million square meters of covered fabrication halls.  This helps the company build quality cruise ships in all weather conditions.

Note: MSC Cruises has announced an order for up to four World Class cruise ships that will also be over 200,000 gross tons each.  However, the cruise line has yet to announced the exact size of the ships.

The first World Class ship is scheduled to debut in 2022.