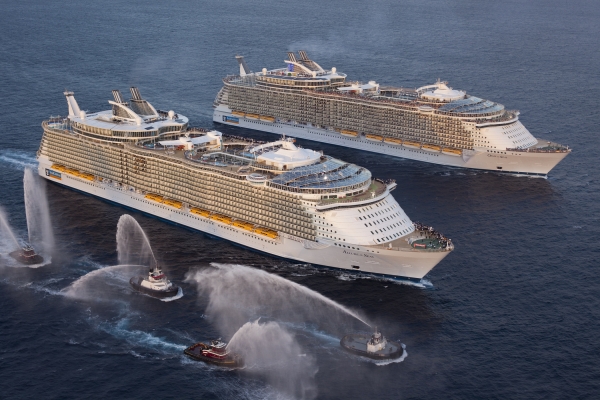 Royal Caribbean has announced that they have ordered a 4th Oasis Class cruise ship that will be added to the cruise line’s fleet in 2018.  The announcement came on the day of the keel laying ceremony for the 3rd Oasis Class ship that is currently under construction.

The first two Oasis Class ships, the Oasis and Allure of the Seas, have remained extremely popular with cruise passengers as both ships still command premium cruise fares, even though they are several years old.  The remain the largest class of cruise ships in the world carrying more than 5,400 passengers each.

The 4th Oasis Class ship will be built by the STX France shipyard, the same shipyard where the 3rd Oasis Class ships is currently being built.  The Oasis and the Allure of the Seas were built in Turku, Finland.

The price of this new mega cruise ship is expected to cost between $1.35-$1.54 billion, in line with what Royal Caribbean paid for the previous Oasis ships.

Oasis of the Seas and Allure of the Seas continue to be in a class by themselves both in terms of guest satisfaction and financial returns. Today’s announcement is a reflection of their success.

Royal Caribbean has yet to announce the names of these two new ships but they will be slightly larger than the Allure of the Seas, making them the largest cruise ships in the world.

The 3rd Oasis Class ship is scheduled to be completed in 2016 and it is still unknown where the ship will be based.  The Oasis and Allure of the Seas have been based out of Port Everglades in Ft. Lauderdale.