Norwegian Getaway Will Sail From Miami in 2014 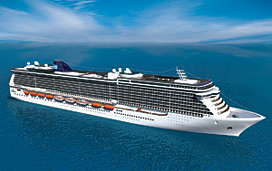 Norwegian Cruise Line announced today that when the Norwegian Getaway sets sail in 2014, it will make the Port of Miami home.  The new state of the art 4,000 passenger cruise ship will be the largest ship to sail from Miami year round.

The Getaway is scheduled to launch in the spring of 2014  and will embark on 7 night cruises.  Specific ports that the Getaway will sail will be announced in the fall of 2012.

NCL CEO Kevin Sheehan stated, “Norwegian Getaway will embrace all that the Magic City has to offer and will offer an extraordinary cruise experience to the more than 4,000 guests who will sail on her each week beginning in spring 2014.”  Sheehan was joined by Miami-Dade commissioner Rebeca Sosa and County Commission Chairman Joe A. Martinez when he made the announcement on the Norwegian Spirit.

The Getaway is the 2nd ship that will be built as part of NCL’s Project Breakaway.  The first ship, the Norwegian Breakaway, will begin sailing week long cruises to Bermuda from the Port of New York City in May of 2013.  Each ship will be 144,000 gross tons.  In comparison, the Titanic was a 46,000 ton ship.

This will be the 4th ship from NCL that will sail from Miami, joining the Epic, Spirit, and Sky.  Norwegian Cruise Line has been sailing ships from the Port of Miami since 1966, longer than any other cruise line.  The Sky has been sailing year round from Miami since 2007, embarking on 3 and 4 night cruises to the Bahamas.   The Sky offers some of the most reasonable rates on cruises to the Bahamas.

The Port of Miami will see nearly 4 millions passengers embark on a cruise in 2012, remaining #1 busiest port in North America.

Ben Souza
Ben is a world traveler who has visited 40+ countries and taken over 70 cruises. His writings have appeared and been cited in various media outlets such as Yahoo News, MSN, NPR, Drudge Report, CNN, Fox, and ABC News. Ben currently resides in Cincinnati, Ohio. Follow Ben on Instagram. Visit Ben Souza on Linkedin. You may email Ben at [email protected]
Cruise NewsNorwegian Getaway Will Sail From Miami in 2014
Previous article
2 Americans Named Among Last 5 Bodies Identified on Costa Concordia
Next article
How to Keep Track of Your Family on a Cruise Ship